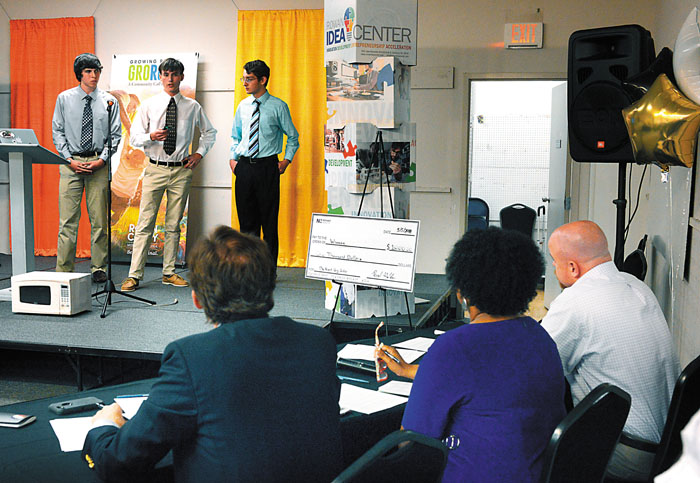 Wayne Hinshaw / for the Salisbury Post In the afternoon session. Parkston Myers, Slaven Brborovic, and Chase Ratliff present an idea on recycling electronics. They are Early College students at RCCC.

SALISBURY —In 2017, Nicholas Corriveau ran into a problem many people have after they accidentally crack the glass of their cell phones — he tried to figure out how to fix it himself.

Corriveau, a 15-year-old freshman at South Rowan High, went beyond a simple check of YouTube on how to make the repairs. He took a class at Rowan-Cabarrus Community College and turned his self-repairs into a bona fide business.

On Saturday, Corriveau and three other students were given seed money to pursue their dreams during Rowan’s Next Big Idea Pitch contest. The contest, which featured a “Shark Tank” style competition featured two sessions, one for students and the other for anyone in the community.

South Rowan High students and local residents took turns presenting their ideas to a panel of judges who were made up of local businessowners and leaders.

The event took place at the future IDEA Center inside the West End Plaza. The high school contest was limited to South Rowan High School students who were selected for a program called “Five Minutes Tops.”

Holda said each of the students was paired with an in-school mentor and an outside business mentor to help with business plans and presentations.

He said he was excited for the opportunities this has opened up for the students.

“I’m extremely proud. This is what it’s all about. I want to be able to provide opportunities for students,” Holda said.

Members of Toastmasters were also present to not evaluate business concepts, but give awards/feedback for presentation quality.

Students Tyler Sheets, 16, and Kira Rymer, 15, sophomores at South Rowan came up with a concept to use Yeti-like technology to keep a dog bowl insulated. Sheets said he came up with the idea when about a year ago he’d taken his dog to a doctor’s appointment and it was hot and the dog got access to a Yeti cup with water in it.

The two used a 3-D printer to make a prototype of the bowl and say they will use the money to help create a usable bowl so they can actually test their ideas.

Sarah Dickinson, a 17-year-old senior at South Rowan, came up with an idea that would use cars to create usable energy. She got the idea after thinking about the action made on an old Singer sewing machine. She believes she can harness the energy used when a vehicle drives over a pedal to be used to power street and traffic lights.

Organizers say they’d love to connect Dickinson with a potential local investor who can help further her idea.

Mikey Wetzel, head of the IDEA Center board and owner of Go Burrito, said the hope is that they can invest in the ideas of local future entreprenuers who would then re-invest in the local community. He said some of the people who are educated in Rowan County take their skills with them when they leave.

The winners of the afternoon community session are:

• Jamaal Brown, first-place, $1,000 for an athletic mouth guard that helps with dry mouth

• Andrew Howe, second-place, $500 for a blockchain payment app for subcontractors

• Elysia Demers, third-place, $250 for the dismantling and relocation of a haunted house

Organizers say Brown, who graduated from Livingstone College that morning, initially wasn’t going to attend. The footballer said during his pitch that he hoped to return with a prototype to Livingstone and be able to give back to the college community and beyond.

Howe, a law student, pitched an idea for an app that would take blockchain technology to create financial transactions for subcontractors in the construction industry.

Demers, who along with husband, Timothy, own Grievous Gallery, pitched an idea to disassemble the “set” of Dr. Evil’s Haunted Houses, a Charlotte fixture, and relocate it to an unspoken location in Salisbury. Demers, who presented her idea along with the history of the haunted houses creator Phillip Morris, founder of Morris Costumes.