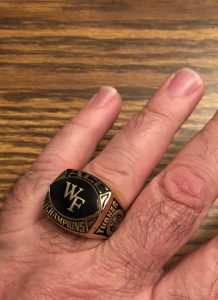 Not a class ring

Strawberry season is in full swing at Patterson Farm. I know this because I visited there a couple of weekends ago with my new husband — and left his brand-new class ring.
“IT’S NOT A CLASS RING!” he hollers. “IT’S A 1970 ACC FOOTBALL CHAMPIONSHIP RING!”
Let me back up.
My husband — to whom I often refer as My Beloved — played football at Wake Forest University as a freshman in 1969. Then he hurt his knee — or so he says. He mentions this every time I ask him to do some random chore. So in 1970, the year his team won the championship, he served as manager. At the time, managers did not receive rings. He never made a fuss about it. He’s just that kind of person — you know, the opposite of me.
Fast forward to homecoming this past fall, when he and his buddies were talking about the Glory Days — as old athletes are known to do. He mentioned he never got a ring. Well, those buddies passed it on the the Powers That Be in the Wake Athletic Department, and SHAZAM! His ring finally arrived in the mail a couple of weeks ago.
I made a short video of him trying on the ring. I was narrating the entire scene play by play, as you can imagine. The only thing he said, quietly: “It has my name on it.”
He put the ring on his right ring finger — and couldn’t get it off.
The next time we were in town, last weekend, we took it by Debbie Barnhardt, who had been kind enough to make his wedding band. It was fashioned from my dad’s original wedding band. He lost it at church, Mother bought him another one, then he found it years later in the gravel drive in his regular parking spot. So it’s quite a special piece of jewelry since it honors the first man I ever loved — and the last.
Debbie measured Jim’s right hand ring finger this time, and it came in at 14 1/2. He is 6 foot 5, after all. She told us the ring needed to be a half-size larger than it was. Luckily, the ring company offers free sizing. Fair enough.
We went on with our day: down to Viriginia’s in Kannapolis to pay on my perpetual account — if you haven’t visited the new shop, it is FABULOUS — then to Patterson Farm to get strawberries, then to Hurley Park to see Spencer Everhart in his prom tux, then Ivan’s for dinner and home.
As we were getting settled, Jim asked, “Where’s my ring?”
I looked in my purse, where it had been safely ensconced in its dark blue box. It was not there.
I must have put it on the kitchen counter earlier. Nope.
I began to mentally retrace my steps. Suddenly, I had this vision of showing off the ring to my dear friend Lee Ann Freeze at Patterson’s. And then putting it on the counter, picking up my strawberries, and walking off.
Oh Lord.
I picked up the phone and called Michelle Patterson, who just happens to be Director of Fun at Patterson Farm and lives next door to the market with her husband Doug in his childhood home. She and Doug have three girls, Victoria and Claudia, sophomores at State, and Chloe, a junior at West.
By this time, it was about 9 o’clock on Saturday night.
“Um, Michelle, did you by any chance find a class ring at the market?” I asked her.
“IT’S NOT A CLASS RING!” My Beloved hollered in the background. “IT’S A 1970 ACC FOOTBALL CHAMPIONSHIP RING!”
“Just hush,” I told him.
“I’ll run next door and look,” Michelle assured me.
I hung up the phone.
“Well,” My Beloved quipped, “at least we don’t have to worry about having it sized now.”
In just a minute or so, Michelle called back. She’s a runner, but it had not been enough time for her to run next door.
“When you called,” she told me later, “I had just gotten home from working in the market. My daughter Victoria overheard me talking to you about not being able to find the ring. When we hung up, she said she knew exactly where it was. She had seen it earlier that evening when she stopped by. We came in and sure enough, it was right there by the counter by the register, with the box open and everything! We were glad to be able to get it back to you.”
So Jim and I went firing down to Millbridge to pick up his ring. I have been guarding it with my life ever since. I even talked to the nice lady at Josten’s yesterday and she explained how to send it back for free sizing.
Back to the strawberries. They’re big, beautiful and juicy for so early in the season. Doug thinks it’s gonna be a good strawberry season, but says he’ll tell me for sure in June.
If you go pick strawberries — or pick them up, as in my case — you might oughta leave your jewelry at home. But even after a long day, Michelle was still smiling after her late-night ring run.
Actually, she was laughing. But still.