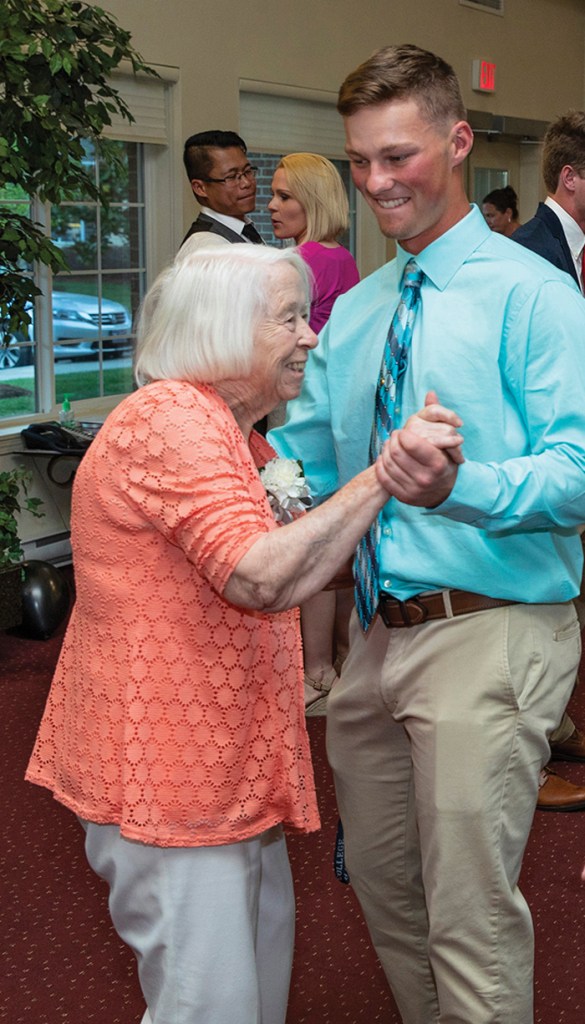 Billed as a “A Magical Moment,” Oak Park Retirement residents in Salisbury gathered Thursday, April 19 for their sixth annual Senior Prom as the evening started with a wonderful meal and magic show. Gathered with them to celebrate the special evening were members of the Catawba College baseball and volleyball teams, deejay Dana Grubb and the East Rowan Jazz Band. The dance floor was decorated in gold, black and white while the tables had magic hat centerpieces. Residents received boutonnieres and corsages, provided by an anonymous donor, from the athletes. 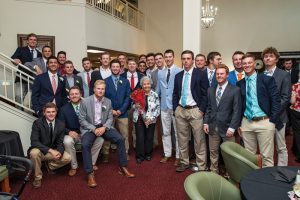 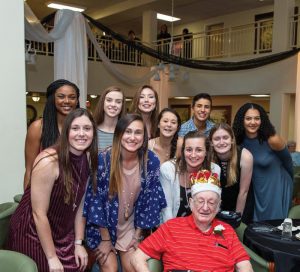 While the band played music that spanned at least 90 years, residents and guests enjoyed the food and their interaction with the athletes. Of special significance was the crowning of Oak Park’s Prom King and Queen by Catawba volleyball’s senior captain Allison Benton and baseball’s DJ Laxton.
Bob Freeman, 92 years old, was crowned King. Freeman came to Oak Park Retirement in 2010 and almost immediately began securing ministers for Sunday afternoon worship services. Freeman said, “I was surprised to be chosen King. I don’t think I have been king of anything before.” Freeman had provided more than 250 ministers for 416 Sundays over his eight years of residence. He later wore his crown to the Morgan Ridge Vineyard to show friends and family.
Reigning as Prom Queen was 95-year-old Cora Kirkman. Kirkman, a native of Brazil, came to Salisbury by way of Washington, D.C. and eventually settled here with her husband, Mickey. Kirkman, a hugely popular choice, said, “I feel so special to be Prom Queen. These residents make me feel loved, especially since I have no remaining family. And I love to dance!” Working as a dress designer and later as a floral designer, Kirkman is glad to be at Oak Park: “I don’t have any regrets and now I get to do what I want.”
The very lively Kirkman has more plans past the prom. She is already planning her 100th birthday party at Oak Park and plans to live until at least 103. Kirkman credits her Catholic faith and clean lifestyle for her long life. She said, “God has always been there for me. Trusting God and learning to forgive have been important to me. Plus, I have never smoked or drank. But I do love to party!”
For the rest of the evening, memories were made on the dance floor and around the tables. Oak Park residents love their ongoing relationship with Catawba College and so do the athletes. Baseball coach Jim Gantt said, “Our athletes need to be involved in the community. It is part of the college’s core values. We tell our recruits what to expect early on and often the families have already asked. We are fortunate that we already know quite a bit about the players, but the credit for being such quality individuals goes back to their upbringing.”
Assistant baseball coach Michael Lowman added, “Some of our athletes are more outgoing and find this interaction to be easy. It’s good for the others to get out of their comfort zone.” Lowman and Gantt laughed that their players came back following the prom after enjoying the experience, but concerned about rejection when asking to dance.
Senior volleyball player Benton had visited at Oak Park before. Her team played the residents in a volleyball match then, but she especially loves the prom. Benton said, “We danced and we talked. One resident whose wife had recently passed away was reluctant to dance but once he joined in, he relaxed and smiled a lot. I enjoyed coming here and having time away from our busy schedules.”
Freshmen volleyball players Micah Ensor and Abby Benton also enjoyed their first Oak Park Prom. Ensor said, “We try to get involved in the community and this was fun. We had nine or ten team members here.” Both girls noticed a resident dancing the Charleston and tried to mimic her movements. Benton said, “She was way better than us but took time to help us learn it.”
East Rowan Jazz Band director Emily Leonard is now in her ninth year with the group and was at her fourth prom. Leonard said, “We had 21 students here, but this is one of our most popular events of the year. It is always an honor to be at Oak Park. It was exciting to see the King and Queen crowned and to have some of the residents come and dance near the band.” Sentimental Journey and Blue Moon are all time favorite selections.
Senior band member Madison Lovingood plays tenor sax and especially values the interaction with the residents. She said, “This is my fourth time here and it’s so much fun. One of the residents brought us a few balloons and everybody wanted one. She said she couldn’t get more but later returned with enough for all of us to have one. I especially remember the year that resident Dr. Clyde Young retrieved his horn from his room and asked what key we were in and then joined right in on A-Train.”
“It is always fun to come here and end up seeing the smiles on all the faces, including ours. Oak Park residents show such appreciation and gratitude for us coming,” said junior baseball pitcher Riley Myers.
“The biggest dilemma was to see who enjoyed it more!” said Oak Park activities director Karen Leonard.