Livingstone College graduation encouraged to embark on the next chapter 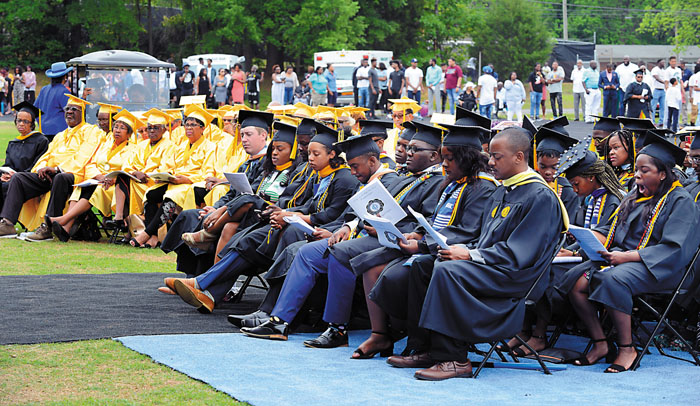 SALISBURY — Lenorris Williams III received his diploma Saturday from Livingstone College, but this business administration major is already ahead of the curve as he’s already embarked on a successful real estate career.

The 21-year-old has owned his business since December 2016 and successfully sold houses in his hometown of Savannah, Ga., Charlotte and Salisbury. Williams said Livingstone College professor the Rev. Dwayne Tut inspired him to go into real estate.

Williams embodies the words of commencement speaker Senator Daniel Blue Jr., who told the graduates to dream big and take control of their narrative.

“As I look at you this morning, I see the next great chapter about to begin,” Blue said.

He told the graduates there would be challenges ahead, but urged them to continue learning.

“Your education doesn’t end today. It’s only the beginning,” he said.

Instead of asking what they want out of life, Blue said, graduates should ask themselves, “what does life need from me?”

“This college believed in you four years ago. By admitting you they placed the future in your hands,” he said.

Blue was the guest speaker during Fall Convocation in 2014 when these students were freshmen.

Valedictorian Phillip Harrison delivered a speech with a mix of humor and reminded graduates of how far they’d come. Harrison, a Richmond, Va., native, spoke of being recruited to play golf and the team’s 2018 CIAA championship win.

He said he wouldn’t change the decision he made to attend Livingstone. Harrison thanked the professors who he said are the “rocks who truly hold Livingstone College together.”

Like Lenorris Williams, fellow grads Alexis Smoot, and Stevee Cotton, both have post-graduate plans. Smoot, 21, received a degree in computer information systems and plans to attend graduate school at Northeastern University in Charlotte.

Smoot, who relied on her family’s support, said being a student at Livingstone College taught her to “survive.” She learned to become independent, she elaborated.

As Smoot’s roommate since freshman year, Cotton, 22, also received a degree in computer information systems. Cotton already has a job lined up with a Charlotte company working in social media management. Cotton said she initially hoped to pursue graphic design, but soon learned Livingstone did not offer design.

She was able to continue on with resources from her professors and some self-taught methods.

During the ceremony, the college also paid homage to its Golden Graduates of 1968. One of those graduates, Carolyn Perry Holt, was most recently a member of the college’s advisory council.

“I’m so thrilled to be here,” Holt said.

She said she and the other graduates were able to spend some time catching up and even attended this weekend’s baccalaureate service as well as other alumni events.

Holt said she and her fellow 1968 graduates have had opportunities to reminisce and talk mostly about how Livingstone College has changed.

The college also received a $25,000 scholarship donation in memory of Dr. Tyrone Gilmore Sr., who was the past national president and chairman of the board of the Omega Psi Phi Fraternity Inc. He died in February and was a Livingstone graduate.

There were 169 graduates who walked across the stage during this weekend’s commencement exercises.