College basketball: College career in the books, Wike looks ahead 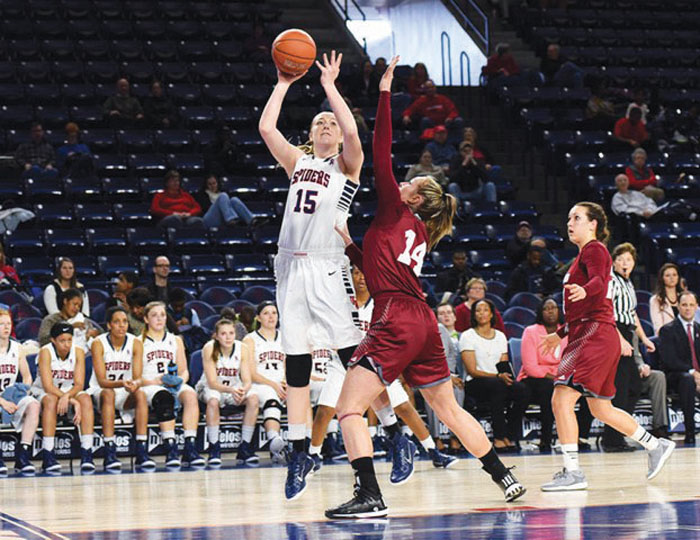 File photo/Richmond Athletics ... Karleigh Wike, a former East Rowan star, completed a four-year collegiate career at the University of Richmond in March and will graduate next weekend.

RICHMOND, Va. — Basketball is over for Karleigh Wike, although there will be a few more painful reminders of the game she’s always loved in the months ahead.

For one thing, there’s a knee surgery scheduled. Her knees took a pounding competing in 112 college games for the University of Richmond. She also has a date with an oral surgeon, as she gets the finishing touches on repairs that were required after she received an accidental elbow from a male scrimmage opponent.

“I got one of those calls this week from my regular dentist letting me know that it was time for my six-month checkup,” Wike said  in a phone interview. “If they only knew how many dental offices I’ve been in, in the last two months. I’ve got pictures of what my mouth looked like after I got hit. You wouldn’t believe it.”

Wike took her last exam as an undergraduate on Thursday. Her major was political science. Her minor was math.

“That math minor was the worst decision of my college career and I made some pretty bad ones,” Wike said with a laugh. “Tough classes.”

The career basketball stats the 6-foot-4 Wike posted for the Richmond Spiders (316 points, 321 rebounds, 65 blocks) look skinny next to her prodigious prep numbers at East Rowan High (1,170 points, 1,291 rebounds, 477 blocks), but Wike is proud of what she accomplished at the Division I level. She started 48 games. She took the pain, weathered the disappointments, stayed the course, kept her grades up. She never took the easy way out when transferring somewhere closer to home looked like an inviting option.

“The whole college basketball experience, for all the ups and downs I went through, I wouldn’t trade it,” Wike said. “As much as I complained at times, I wouldn’t change anything because it made me grow. Sure, there were a lot of cons, but there were so many more pros than cons.”

Wike was famously meek in her younger days, actually apologizing for blocking the shots of opponents a foot shorter. She was skilled but timid, and the worry everyone had about her as she moved up  the basketball ladder was whether she would be mean enough to survive when she started facing people her size.

Wike had just about everything go right for her in high school. She had easy coordination, an overload of grace and finesse for someone blessed with her height. She was South Piedmont Conference Player of the Year for coach Danielle Porter in 2014 when East was 22-4. She was all-county three times and all-conference three times. As a senior, she was nominated for the McDonald’s All-American Game.

But her freshman season at Richmond was humbling. She was introduced to a much more physical game than the one she was used to and she sat behind experienced post players who pushed her around in practice. She paid hard dues. She averaged just seven minutes per game. When she scored two points, it was news.

“I came in as a freshman with high hopes, and then I wasn’t playing,” Wike said. “I was homesick, and then I injured my shoulder. But I got through that year. I knew I had to improve. I had to get tougher.”

Her first start at power forward for the Spiders came in November of her sophomore season against Old Dominion. She played passively and lost her starting spot for a few weeks, but then she regained it in late December. She posted her first college double-double against Lafayette. She made the all-tournament team in a two-day Christmas affair hosted by Virginia. She came close to several more double-doubles. Stat-wise that was her best season.

But then she got knocked back down her junior year.

“Richmond brought in a talented freshman (Jaide Hinds-Clarke) and she took my spot,” Wike said. “That was my toughest time as a college athlete because when you go from starting to the bench you just feel like giving up and going home. I got discouraged with basketball, and I tried to focus even more on academics and not even worry about basketball, but that wasn’t the answer. Eventually, I learned a great deal. Even when a girl takes your spot, she’s still your teammate, and you still have to want her to do well. You cheer for her and she cheers for you. We actually became really good friends. It was just one of those experiences that I’m grateful for now. It made me grow up a lot.”

Between her junior and senior seasons, Wike made up her mind that her last season of basketball was going to be a strong one.

“My confidence got a boost when I went abroad that summer,” Wike said. “I was one of the Richmond students chosen to study for six weeks in England, and I took two pre-law classes at Cambridge. I came back home feeling good about the academic side of things. I relaxed and I started playing the best basketball of my life. My senior year, I know my stats weren’t big, but I know I contributed more to our team than I ever had.”

Wike started 20 games as a senior.

Her senior year also included an off-the-field crusade that won her a prestigious award.

“When I was 12 years old, I got a Tim Tebow calendar for Christmas, still the greatest Christmas gift ever,” Wike said. “I”m just a big fan of his and how he uses his platform as a well-known athlete to help people.”

Wike wore No. 15 at Richmond, the number Tebow made famous when he was quarterbacking the Florida Gators.

When Tebow’s baseball team was playing in Maryland last summer, Wike and a basketball teammate made the trip to watch him play. Wike was fascinated by the manner in which Tebow interacted with the special needs kids at that game, and after following the team bus — security was heavy around Tebow at the ballpark — Wike finally got to meet Tebow.

After talking to Tebow, she conducted online research concerning one of the pet projects of the Tim Tebow Foundation — “The Night to Shine”  — hundreds of prom nights all over the world, all scheduled for Feb. 9, for special needs teenagers. Wike started working last  August to help bring a “Night to Shine” to Richmond. That meant meeting with supporting churches, finding a venue for the event and recruiting Richmond student-athletes to volunteer as buddies for the teens who would be attending.

“I had a little bit of power as the president of the student-athletes association, and I decided to use it,” Wike said. “I recruited over 100 Richmond athletes to volunteer.”

When Wike started working toward the “Night to Shine” in August, Richmond’s basketball schedule hadn’t come out yet. When that schedule was revealed, she found out she’d had to leave with the basketball team on Feb. 9 for a game in Philadelphia against La Salle on the 10th. That meant she wouldn’t be able to actually attend the “Night to Shine” that had become her passion, but she kept working to make it a reality.

When the morning of Feb. 9 rolled around, an emotional Wike headed to the Altria Theater, the site of Richmond’s “Night to Shine” with a teammate. The plan was to help out with the last-minute decorating for an hour or so before the team bus left for Philly. It turned out to be a trip Wike will never forget.

“I’m driving to the Altria in downtown Richmond, and we’re almost there, and my teammate who I talked into going with me says, ‘Uh, Karleigh, don’t freak out, but that’s Tim Tebow coming up the sidewalk.’ We knew he tried to attend some of the Nights to Shine, but it was unbelievable to actually see him there.”

So Wike wound up talking to Tebow for the second time.

Wike only got to see Richmond’s “Night to Shine” through videos and photos, but it was a huge success. There were 900 people taking part in the event as guests or volunteers. There was a red carpet laid out for the special needs kids who arrived in limos, hair done professionally, shoes shined and wearing formal attire.  At the University of Richmond’s annual awards banquet, Wike shared the “Outstanding Civic Engagement Award” for her part in making it all happen.

Wike’s final weeks of basketball included that accidental elbow in a late February practice session. She had several teeth knocked back more than an inch and there was a lot of blood. The next game was against George Washington in D.C., the best team in the league, the last game of the regular season, and Wike insisted that she could play. She put in 18 minutes on the court and Richmond upset George Washington, 49-36.

“I got hit in the mouth again in that game, but I was wearing a mouthguard that saved me,” Wike said. “I played some good defense and we won. It meant a lot. George Washington will be the most memorable college game for me because it was such a good team win and because I played when I was hurting.”

Wike had some fine games late in her career. She helped Richmond win on her Senior Day against VCU after they handed her a framed No. 15 jersey.

Wike walks away from basketball with a lot of memories and a degree. Basketball was never the end for her, it was just the beginning. Her hoops skills gave her a chance for a high-level education, to see the sites (Europe, New York, Las Vegas) and a chance to grow up in an environment that challenged her.

Law school will be next. She’ll take the Law School Admission Test in June.

“I don’t know what’s going to happen next, but I’m a confident person right now,” Wike said. “I owe that confidence to my experiences in college basketball.”