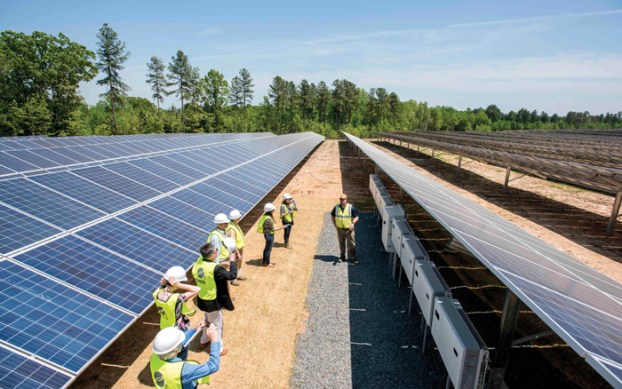 JON C. LAKEY / SALISBURY POST Brad Micallef, right, operations and maintenance director for solar operations, leads one of the tours in the new solar farm. O2 EMC Solar offered a short tour of their newest solar farm project that is currently under construction on Dunns Mountain Road in Rowan County in 2018.

Building toward a brighter future: New solar farm being built in Rowan County

SALISBURY — Workers are just over halfway through building a new solar farm on Dunns Mountain Road.

And halfway through construction seemed like a good time to bring neighbors and contributors in to see the progress, said O2 EMC CEO Joel Olsen.

“(This event) is to gather all of the people that have been involved in the project — including the neighbors, people who have worked with permitting and planning and design — the chance to see a solar farm in construction,” Olsen said. “So we can see the different parts and pieces of the solar farm, the people who work on it, what skills are required.”

The event name — the Salisbury Solar Mid-Construction Event — was a bit of a misnomer, said Brad Micallef.

Micallef, operations and maintenance director for Solar Operations, said work crews were about five weeks into construction with three more weeks to go.

“We’ll be starting to energize and push power by the end of the month,” Micallef said.

Micallef said crews hadn’t even “touched a blade of grass” on the site before February.

Olsen said he wanted the community to think of the farm as an asset.

“We have representatives from the community college here, from the school system, to see how this can be used as a kind of educational asset for the county. But also as an asset for agriculture,” Olsen said.

During a presentation given by Olsen at the event Friday, event goers heard about how agriculture could benefit from solar farms.

“One of the things we’d like to say we’re doing at this site is developing new ways to put agriculture and clean energy together,” Olsen said.

Olsen said one of the most “precious commodities” for farmers is land.

“And if you have animals, you need a place to graze those animals. And very often your home farm, especially in the middle of summer, gets overgrazed and it’s very expensive to pay $100 an acre to graze,” Olsen said.

Olsen said O2 EMC was working with Sun Raised Farms to bring sheep onto its solar farms so they could graze and, in turn, keep the farm’s grass heights manageable.

“Because one of the biggest things that can happen to our solar farm is that trees or weeds can grow over the panels and shade them and hurt production. And the local farmers that work with Sun Raised Farms, they’re here every day. So if a panel gets cracked, if a wire falls down, we know about it immediately,” Olsen said.

The sheep-grazing model is also used at O2 EMC’s farm near Rockwell.

Tours of the farm were offered to event goers who wore hard hats, vests and closed-toed shoes.

Micallef, who led one of the tours, said the approximately 18,000 modules on the new farm would offset approximately 500 local homes.

“So instead of using fossil fuels and nuclear or anything like that, this farm will provide 500 homes power on a reliable basis,” Micallef said.

“Obviously we’re in construction, but when these are running, you have no water usage, no smokestacks of any type,” Micallef said. “There’s no fuel other than sunshine coming in.”

All of the power generated by the farm will be sold to Duke Energy. That is also the case for the O2 EMC plant near Rockwell and a third farm that O2 EMC is planning to build in Bear Poplar.

The farms are privately funded by O2 EMC and will be owned and operated throughout the 15-year contract with Duke Energy by O2 EMC.

SALISBURY — One-stop early voting ends today at the Rowan County Board of Elections office in Salisbury. The office is in... read more