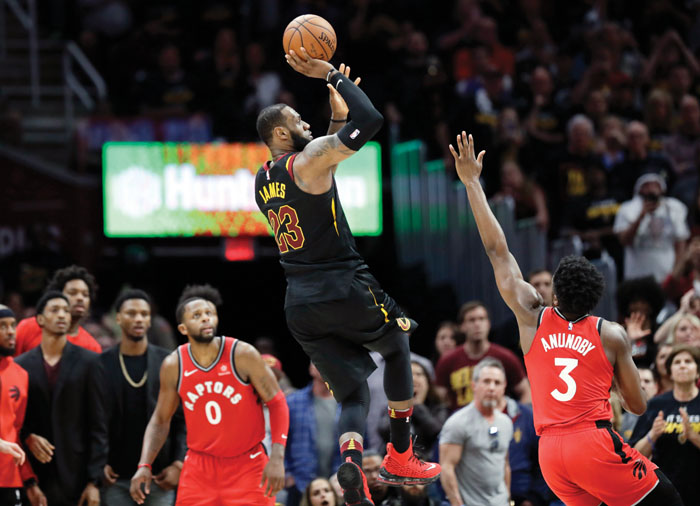 Cleveland Cavaliers' LeBron James (23) hits the game-winning shot as Toronto Raptors' OG Anunoby (3) and CJ Miles (0) watch during the second half of Game 3 of an NBA basketball second-round playoff series, Saturday, May 5, 2018, in Cleveland. The Cavaliers defeated the Raptors 105-103. (AP Photo/Tony Dejak)

James banked in a running one-hander at the buzzer, giving the Cleveland Cavaliers a 105-103 win over Toronto on Saturday night in Game 3 and shoving the Raptors to the edge of their most devastating playoff exit.

After the Raptors tied it on rookie OG Anunoby’s 3-pointer with eight seconds left, James took the inbounds pass, dribbled the length of the floor and rose off the floor on the left side of the basket just feet from Toronto’s bench.

As the noise level in Quicken Loans Arena rose to jet-engine levels, the Cavs sprinted from the other end of the court and mobbed James. After some tight hugs, he was back atop the scorer’s table — just like he did after a last-second 3-pointer to win Game 5 against Indiana — and celebrated a win that was up for grabs.

“You just get the ball to Bron at the end of the game,” Cavs coach Tyronn Lue said.

James finished with 38 points, Kevin Love added 21 and 16 rebounds and Kyle Korver scored 18 for the Cavs, who have won nine straight postseason games over the Raptors and may sweep them for the second straight year.

Kyle Lowry scored 27 for Toronto, which clawed back in the fourth quarter while All-Star DeMar DeRozan was on the bench.

Raptors coach Dwane Casey wanted to trap James on the final play, but he went by defenders at “100 miles per hour.”

“We wanted to make somebody else get the shot and we just didn’t get it done,” Casey said. “We are all hurt.”

After winning the series’ first two games in Canada, the Cavs came home and won a brawl with the Raptors, who just can’t beat James. He’s 11-2 against Toronto in the past three postseasons.

The three-time champion has ended the Raptors’ past two seasons, and despite playing with a different supporting cast, James is one win from a Toronto trifecta.

Game 4 is Monday night, and the odds are stacked against the rattled Raptors. Of the 129 teams in NBA history to fall behind 3-0, none has come back to win.

“Fight,” Lowry said when asked what’s next. “Rumble. What else are you gonna do?”

This was supposed to be the Raptors’ season, the one that ended in triumph over James. Toronto had the East’s best record, the No. 1 seed, home-court advantage and a Cleveland team that appeared very beatable.

But the Cavs stole Game 1 by a point in overtime, and James scored 43 in a virtuoso Game 2 performance.

Then, as he has done so many times, he ripped out Toronto’s hearts with a probable series-and-season-ending dagger, a shot that belongs right at the top of so many in his remarkable career.

The first half ended in frustration for the Raptors with DeRozan, coach Dwane Casey and his assistants screaming at the officials following a sequence that went against them.

Serge Ibaka’s basket was originally counted and then waved off by the referees, and the reversal was doubly painful as Love buried a 3-pointer to put the Cavs ahead by 13. Jeff Green’s layup just before the horn made it 55-40 and an incensed Casey, his suit coat flying open and his tie jumping off his chest, stormed off the floor.

Desperate to find something, anything, to slow down the Cavs, Casey changed his starting lineup for Game 3. He inserted 6-foot guard Fred VanVleet and benched forward Serge Ibaka, going with a smaller lineup to push the pace.

However, Toronto started 2 of 11 from the field and the Raptors were quickly down 12 and seemingly in big trouble when DeRozan picked up his second foul and went to the bench.

PHILADELPHIA (AP) — Al Horford had no use for the premature celebration that showered confetti all over the 76ers’ home court at the end of regulation, delaying overtime and prompting an impromptu cleanup job.

Turns out, Horford has the Celtics just a game away from a real sweep.

Horford scored the go-ahead basket for Boston late in overtime in a wild Game 3 where the Philadelphia 76ers were sloppy with the basketball and the confetti, leading the Celtics to a 101-98 victory and a 3-0 series lead on Saturday night.

“These are the kind of moments you want to be in as a basketball player,” Horford said.

He saw some wild ones down the stretch.

Marco Belinelli had hit a buzzer-beater to end the fourth quarter that sent the Sixers into a wild celebration on the court as confetti shot out of a cannon that made it rain over chunks of the arena.

Game 3 was only headed into OT.

“I wanted to play right away,” Horford said. “I didn’t care about the confetti.”

The tale of the (ticker) tape shows the Celtics are still the team to beat.

The Celtics, who rallied from a 22-point deficit to beat the 76ers 108-103 in Game 2, can advance to the Eastern Conference finals for the second straight season on Monday.

The ending to regulation was about as wild as it gets for both teams. JJ Redick threw away the basketball on an errant pass to no one that was scooped by Terry Rozier who threw to Jaylen Brown for the basket and an 89-87 lead.

Seconds later, Belinelli stunned everyone with a falling 22-footer in front of the 76ers bench as time expired that sent the game into overtime.

— and confetti mistakenly blasted from the cannon. There was about a seven-minute delay while team employees scrambled to clean up the mess on the court. Some players even scooped up confetti as everyone waited for the start of overtime.

Confetti Guy — wearing a “Breaking News: I Don’t Care” T-shirt — pushed the button too early and the rectangular pieces were soaring everywhere.

Confetti Guy — who declined to give his name — came over to press row and said the Sixers “better win or I’m done.”

Belinelli opened OT with a 23-footer and Redick followed with a 3 that appeared to take him off the hook.

But the Celtics wouldn’t let them pull away and Horford escaped for a layup with 5.5 seconds that gave Boston a 99-98 lead. Ben Simmons then threw the ball away after a timeout and Horford sealed the win with two free throws.

Sixers coach Brett Brown said he thought Belinelli had won the game with a 3-pointer.

“Walk off 3. I thought it was. I actually left the court,” he said. “You come back on and there’s confetti. You move on. It slows the game down a lot but you move on.”

Joel Embiid had 22 points and 19 rebounds for the Sixers, Redick scored 18 and Simmons 16.

Horford hit the big shots in the final minute of overtime to silence what had been a rabid crowd. Super Bowl MVP Nick Foles rang the ceremonial bell and whipped the crowd into a frenzy. One fan waved a sign that said “Philly Special 2.0” as a nod to the trick play called that allowed Foles to catch a touchdown pass against the New England Patriots.

But not every Philly team can beat one from New England in a big game.

Simmons, the rookie of the year favorite, had a miserable Game 2 and scored only one point and failed to score a field goal for the first time all year. Hall of Famer Allen Iverson called Simmons and gave him a needed pick-me-up.

“Just play the game I’ve been playing,” Simmons said AI told him. “I know how to play the game. I can’t think about it too much. I’ve just got to go out there and do it.”

Determined not to get embarrassed again, Simmons scored on a driving layup less than a minute into the game.

He did it all in the second quarter when the Sixers looked every bit the team that ended the season on a 16-game win streak.

Trailing by 10 early in the second, Simmons had an emphatic slam to kickstart a rally. Simmons would make the highlight reel with a behind-the-back pass to a charging Embiid for a thunderous dunk over Aron Baynes. Embiid made the free throw and the crowd was going bonkers.

Redick and Dario Saric each hit 3s during the 13-0 run that helped the Sixers take a 51-48 lead into halftime.

76ers: The Sixers have suddenly become one of the hottest teams at attracting celebrities. Rapper Meek Mill, Questlove of The Roots, celebrity physician Dr. Oz, UFC President Dana White and director M. Night Shyamalan were all at the game, as were other members of the Eagles.

Celtics: The Celtics missed 15 of 22 3s in the first half and only attempted four free throws.

Embiid was just 2 of 3 from the free-throw line and believed he was hacked most of the game.

“I’m too big not to get fouled every time I go to the basket,” he said.

Coach Brett Brown endorsed assistant coach Lloyd Pierce as the next head coach of the Atlanta Hawks. Pierce interviewed for the job on Friday.

Game 4 is Monday at the only-in-the-postseason tip time of 6 p.m. EDT

Raptors: Casey has been criticized for some moves — and ones he hasn’t made — in the series. He’s also aware of the narrative that his team has been mentally defeated by James. “It’s not in my head,” he said. “It’s disappointing. It reminds me of back in the days of having to get over the hurdle of (Michael) Jordan. At some point you’ve got to get over that hurdle, you’ve got to knock it down, you’ve got to knock the wall down.” … Toronto fell to 0-6 in playoff games in Cleveland, tying Atlanta for the worst postseason record by an opponent.

Cavaliers: Several Cleveland players watched the dramatic finish of the 76ers-Celtics game from their locker-room chairs before tip-off. … James moved past Tony Parker (226) for the fifth-most games in postseason history. Derek Fisher (259) is the all-time leader, followed by Tim Duncan (251), Robert Horry (244) and Kareem Abdul-Jabbar (237).