Shaquem Griffin ready to have focus on football in Seattle 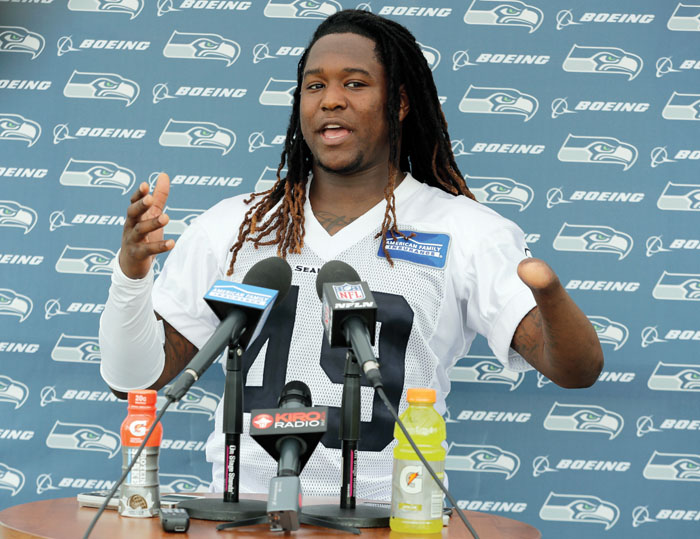 By TIM BOOTH, AP Sports Writer
RENTON, Wash. (AP) — The number was different on Friday — No. 49 instead of No. 18. So were the colors, trading black and gold for dark blue and white.
The effort and excitement from Shaquem Griffin? That remained the same.
“We had to slow him down on some stuff early. In the walkthrough he was going too hard. We had to chill him out a little bit,” Seattle coach Pete Carroll said.
The next chapter of Griffin’s football career got underway with the first day of Seattle’s three-day minicamp for rookies. In a way, it was a welcome return to normalcy for Griffin after months where the focus was strictly on what he’s overcome missing his left hand and whether he would be given a chance in the NFL.
For one afternoon —even if it was simply in shorts, his new jersey and a helmet — Griffin could just be a football player.
“It’s kind of fun to be honest. I was ready to get back to football. I’m pretty sure all the guys that are here were ready to get back to football,” Griffin said. “When you’re away from football, you have to do all the drills and the combine and the pro day. The only thing you are really here to do is play football. So when you get a chance to go to the draft and that part is over with, and you get signed on to a team and you’re ready to go, now it’s back to everything you’ve been doing to get to this point and that’s play football.”
The day was filled mostly with basics, as Griffin and the rest of Seattle’s draft class and rookie free agent signings learned how Carroll runs things in Seattle. Considering how the past week has been, even the mundane fundamentals were welcomed by Griffin.
Outside of the quarterbacks drafted in the first round, there was no bigger story in the draft than where Griffin would go. He was a star in college at Central Florida and deserving of a shot in the NFL, especially after stealing the spotlight with his performance at the scouting combine.
It was Seattle that eventually gave Griffin his NFL chance, drafting him in the fifth round and reuniting him with his twin brother Shaquill, who was drafted by the Seahawks in 2017 and became a starting cornerback in his rookie season. But with the pick came an avalanche of requests and attention for Griffin and the Seahawks to filter. And in the grand scheme, Griffin is still a draft pick that must find a role as a weakside linebacker and special teams contributor.
“It’s extremely important for that turn to occur,” Carroll said. “It’s been a great story, it will always be a great story, but right now he’s got work to do and he’s got focus he’s got to generate. He’s got a lot of people tugging on him and for all of the right reasons and all of that, but I know that he’s very determined and we are to help him in his pursuit of making the club and making a spot and all of that. He’s like everybody else, he’s got to compete like everybody.”
Carroll did note that Griffin seemed to have a little better understanding of what he was going to face arriving for the rookie minicamp likely thanks to some tips from his brother. While this weekend is just three days of creating the foundation, the next step for Griffin will come later this month when the Seahawks move into the next phases of their offseason program and integrate more of the rookie class.
“”It’s been a whirlwind but that’s over with,” Griffin said. “It’s time for us to get to work and make sure I give high competition. Make sure I get a chance for the coaches to see who I am. Make sure I can do my best to make sure I can make my players better and help anybody I can.”
___
For more AP NFL coverage: http://www.pro32.ap.org and http://www.twitter.com/AP_NFL