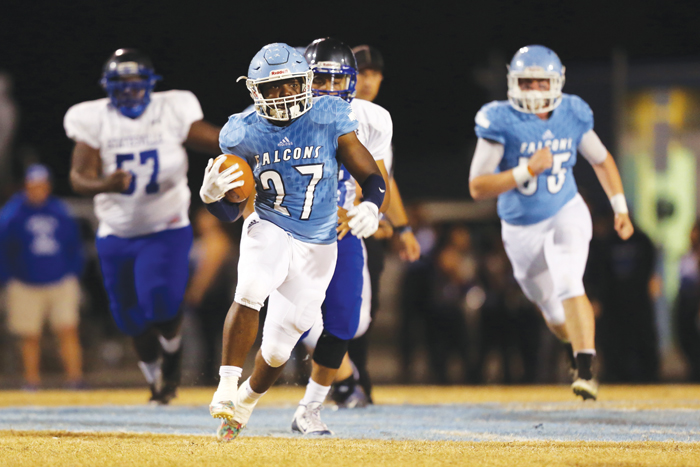 For four years, Rankin won over his football teammates and coaches with his leadership and attitude.

“He went through some adversity here,” West head football coach Joe Nixon said. “But he handled that adversity like a man. I’m prouder of him for the way his maturity level grew than for anything he did on the football field.”

Rankin, a rugged, stocky, 205-pound back who finished his high school career with 333 carries for 1,444 yards and 20 touchdowns, is going to get a chance at the college level. He’s an excellent student, an articulate speaker. His classroom success led to an academic scholarship that opened doors for him at Averett University in Danville, Va. He made things official with Averett at a signing party in the West media center on Thursday afternoon. The books will come first for Rankin, whose dream is to become a college coach, but he also has the skills and toughness to help a Division III football program that was 6-4 last year.

Rankin arrived at West as a ninth-grader in 2014, already physically powerful and heralded as a potential difference-maker. He paid dues as a freshman on a strong jayvee team, making it up to the varsity for a handful of carries.

Rankin’s junior production was limited by an early-season knee injury. He managed one super game against East Rowan with 122 rushing yards, but Quarles carried the load almost every Friday.

It was finally going to be Rankin’s turn to shine last fall, but the arrival of transfers Jayden Jones and Jaden Perry changed the landsdcape. Instead of Rankin being the featured back as a senior, Nixon tried the three-headed monster approach. Rankin brought thunder, while his new teammates supplied lightning. Everyone had a good year, but no one had a huge year. Rankin’s senior rushing totals were more solid than sensational: 129 carries, 541 yards, 11 touchdowns.

“I told those guys the first day of practice that all of them were good players, but no one would be getting 25 carries,” Nixon said. “They worked with each other and cheered for each other. Martavio accepted his role, no matter what we asked of him. He blocked. He caught passes. Above anything else, he’s a guy who wants to win.”

As a senior, Rankin got a chance to demonstrate how versatile he can be. He was still primarily a running back, but he also lined up at fullback, tight end, linebacker and defensive end. He returned some kicks.

“Looking back at my senior season, we didn’t win as many games as we wanted to, but we handled things well,” Rankin said. “My role was to show leadership. When there was adversity, we handled it.”

Devin Turner, the St. Andrews-bound lineman who was the county’s defensive player of the year, has been a teammate of Rankin’s since their  jayvee days.

“That dude was a team leader,” Turner said. “He brought it in games and he brought it in practices. I can you tell he was a load to tackle in practice. I always was happy when Martavio got the ball in games. Tired or not, he was going to give us everything he had.”

Rankin, who scored 647 points for West Rowan basketball teams despite being 5-foot-7,  had heard good things about Averett from his friend JaVon Lofton, a former West Rowan offensive lineman who made a transition to the defensive line as an Averett freshman and played in six games.

“JaVon had talked up Averett, but even though I had heard from some other schools during the recruiting process, I hadn’t heard anything  from Averett,” Rankin said. “But then one day Coach Nixon  tells me there’s a coach from Averett who wants to talk to me. I just took it  from there and ran with it. I was accepted by  Averett as a student first. Then they told me I had a spot on the football team.”

A forceful runner who can barge through tacklers, Rankin hopes to be a college ball-carrier, but he’ll accept any role that gets  him on the field.

He looks trim.  He did a lot of running during basketball season, and he appears to be in great shape as he prepares for the next phase of his athletic life.

“It’s big any time one of our guys gets to go to college,” Nixon said. “Martavio will do well. He’s a natural leader, a student of the game. Coaching could be the perfect profession for him.”