Column: Time’s up for cheerleaders/dancers at NFL, NBA games 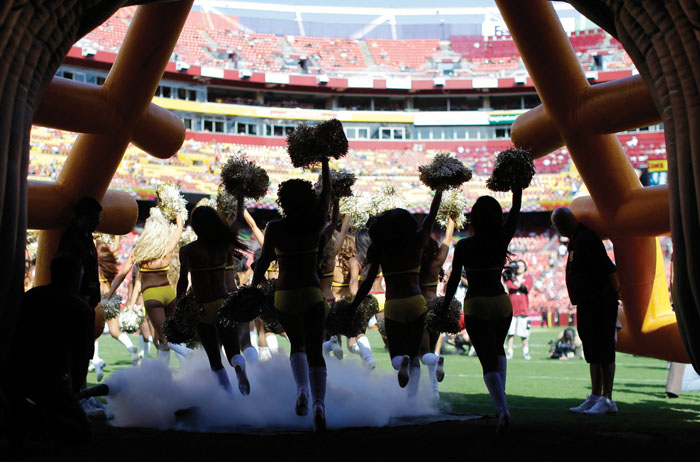 FILE - In this Aug. 24, 2013, file photo, Washington Redskins cheerleaders run out of a tunnel before an NFL preseason football game against the Buffalo Bills in Landover, Md. The Redskins say they're concerned by allegations made by cheerleaders in a New York Times article about a trip to Costa Rica for a photo shoot in 2013. Team president Bruce Allen said in a statement Thursday, May 3, 2018, that the organization is immediately looking into the situation. (AP Photo/Patrick Semansky, File)

ATLANTA (AP) — This is not a rant against cheerleading.

That’s a legitimate sport, played by elite athletes — men and women — who are worthy of admiration for their daring and skill.

There might even come a day when cheerleaders are competing for gold, silver and bronze at the Olympics.

None of which has anything to do with what happens on the sidelines of an NFL or NBA game.

Those are scantily clad performers often leered at by fans — or, as we’re learning, perhaps even worse.

The #MeToo era is the perfect time to retire these objectified, chauvinistic relics (and, while we’re at it, ditto for the barely clothed women who climb into the ring to tell us what round it is at boxing and MMA events).

“There is a misconception that cheerleading is just sideline dancing. This could not be further from the truth,” said Savannah Parrot, an 11th-grade cheerleader at Niwot High School in Colorado. “Cheerleaders are athletes. We compete in local, state, national and international competition and are evaluated on the difficulty of our routines including advanced tumbling passes and intricate stunt sequences.

“If the NFL and NBA wanted to have cheerleaders,” she went on to say, wise beyond her years, “I have no doubt that qualified athletes would be honored to represent our sport.”

That’s not what the NFL and NBA want, of course.

They’re looking for attractive dancers showing lots of skin, apparently in the belief that sex is one of the best ways to keep fans entertained beyond the product on the field or court.

And, according to a report by The New York Times , cheerleaders from Washington’s NFL team were forced to play an even seedier role behind the scenes.

During a 2013 trip to Costa Rica, they allege their passports were collected, they were asked to go topless for a calendar photo shoot that included male spectators, and they served as escorts for sponsors at a nightclub. The cheerleaders quoted in the report spoke on condition of anonymity because they signed confidentiality agreements.

The team said it’s concerned by the allegations and conducting an investigation, but we all know where this is going. Already, team president Bruce Allen said many current and former cheerleaders are contradicting allegations in the report.

At least the NBA had the good sense to break from any pretense that these are cheerleaders, adorning their groups with names such as the Knicks City Dancers and Memphis Grizz Girls. These are dance groups, pure and simple, often performing sex-tinged routines that are a focal point of the between-game entertainment.

In the NFL, the dancers play a less-prominent role (the stadiums, after all, are much larger) but they’re still passed off as cheerleaders, for no apparent reason. They are certainly not there to lead cheers. Their main purpose seems to be wiggling around as provocatively as possible for the men in the crowd, all while ignoring how many women are now in the stands.

This not-so-proud tradition can largely be traced to the Dallas Cowboys Cheerleaders becoming cultural icons in the 1970s, though it’s worth noting that venerable franchises such as the Green Bay Packers, New York Giants and Pittsburgh Steelers don’t have cheerleading squads.

It doesn’t seem to have hurt their popularity or success on the field.

“It is way past time for the NFL and NBA to get rid of cheerleaders,” said Jeffrey McCall, a professor of media studies at DePauw University in Indiana. “Other pro sports such as hockey and baseball seem to manage without thinly clad women as part of the game-day experience.”

These faux cheerleaders look increasingly archaic when so many women are stepping forward to say enough’s enough.

“Given today’s concerns about sexual harassment and domestic violence, the NFL and NBA clearly have tin ears in this matter,” McCall said. “Cheerleaders at pro games don’t really cheer and inspire fans or players anyway. They are simply ornaments.”

That should be offensive to all of us, but especially those who are actual cheerleaders.

Tens of thousands of athletes participate in this rapidly growing sport at competitions around the United States, which prompted Disney to build a new 8,000-seat arena at its Wide World of Sports complex in Florida for those types of events.

In 2016, the International Olympic Committee even recognized cheerleading as a provisional sport , the first step toward possibly claiming a spot at the Summer Games.

Of course, cheerleading also serves as a complement to sports such as football and basketball.

“It is called cheerleading because their role is to lead the crowd in cheering for the team,” said Shauna MacDonald, assistant director of the Gender & Women Studies Program at Villanova University. “This, I think, can still be a positive and interesting purpose. Cheering is part of the ritual of sport, especially in North America, and having people to pep up the crowd and lead the cheers is a good thing.

“We know that this doesn’t require cheerleading to look exactly as it does, because bands and pep squads also serve in these roles. In order for the culture of cheerleading to change, however, there would have to be some sweeping cultural shifts.”

There’s no sign of it happening in the NFL or NBA.

Time’s up for cheerleaders or dancers of whatever you want to call them.

Paul Newberry is a sports columnist for The Associated Press. Write to him at pnewberry@ap.org or at https://twitter.com/pnewberry1963 .