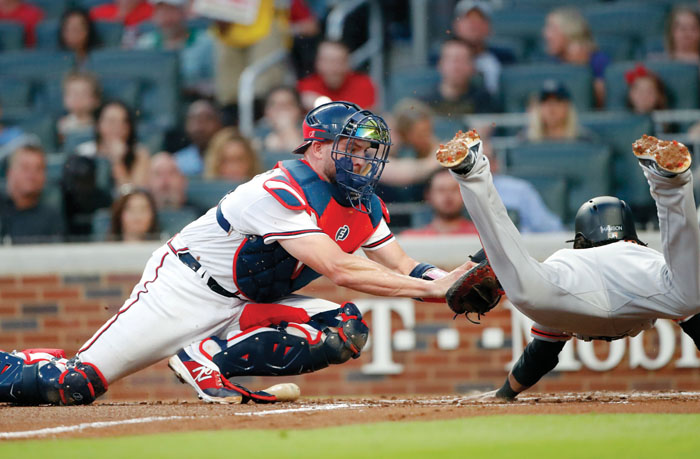 San Francisco Giants' Alen Hanson, right, beats the tag from Atlanta Braves catcher Tyler Flowers, left, to score on a Buster Posey base hit in the second inning of a baseball game Friday, May 4, 2018, in Atlanta. (AP Photo/John Bazemore)

Freddie Freeman put Atlanta ahead 2-0 with a two-run homer in the first, then Bautista followed with a double off the wall, thrilling a crowd of 41,807 on hand to see the division-leading Baby Braves following a stellar road trip. That’s the most fans since the Braves opened their new park last season.

It was all San Francisco after that.

Stratton (3-2) gave up six hits, three runs and two walks and struck out six to recover from a 15-6 loss to the Los Angeles Dodgers in his previous start. He mostly shut down the Braves, who began the night in first place in the NL East and leading the majors in slugging percentage.

Bautista, whose contract was selected from Triple-A Gwinnett, went 1 for 4 with two strikeouts in his Atlanta debut. He was playing his first game of the season after remaining unsigned until mid-April amid a historically slow free agent market.

Bautista played an error-free game at third base, a position the six-time All-Star has played sparingly 2011.

The Giants took charge in the second. Blanco tripled, Alen Hanson added a two-run double and scored on a fielder’s choice, and Brandon Belt had an RBI double before Evan Longoria’s RBI groundout put San Francisco up 6-2.

Brandon Crawford’s third homer, a two-run shot, gave the Giants an 8-4 lead in the seventh. Longoria’s seventh homer made it 9-4 in the ninth.

Nick Markakis hit his sixth homer in the third, and Ozzie Albies had a sacrifice fly in the seventh for Atlanta.

Giants: RHP Mark Melancon will throw his first bullpen of the season on Saturday. The oft-injured closer has been on the disabled list since the start of the season with a right elbow flexor strain. He had a stem cell injection on April 12. … OF Mac Williamson is eligible to come off the seven-day concussion disabled list Saturday, but manager Bruce Bochy said he has a virus and might not be ready.

Braves: SS Dansby Swanson was placed on the 10-day disabled list with left wrist inflammation. Swanson was removed from Wednesday’s game at the New York Mets in the sixth inning and did not play in Thursday’s trip finale. He is hitting .298 with two homers and 13 RBIs but just .171 in his last 35 at-bats.

ALL SET FOR SUNDAY

Atlanta manager Brian Snitker said RHP Mike Soroka will make his second career start Sunday, but he wouldn’t commit beyond that. The 20-year-old Soroka won his debut Tuesday at New York, beating the Mets 3-2 giving up no walks, one run and six hits in six innings.

Braves: RHP Brandon McCarthy (4-0) gave up one run in 5 1/3 innings of his last start, a 10-1 win over Philadelphia. He’s made five career starts and two relief appearances against San Francisco, going 1-3 with a 7.34 ERA.