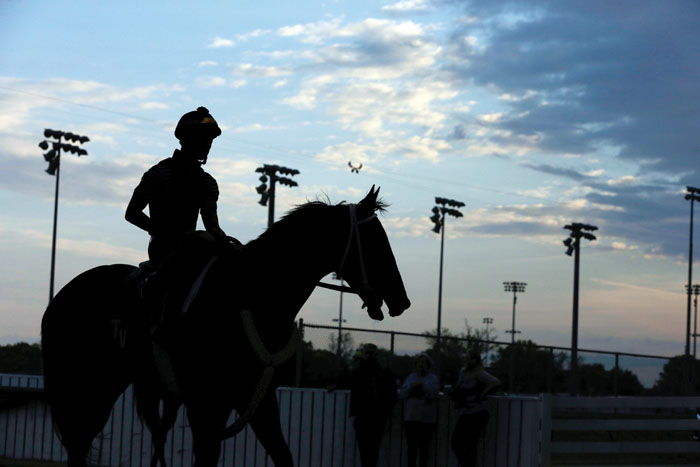 A horse works on the track during a morning workout at Churchill Downs, Friday, May 4, 2018, in Louisville, Ky. The 144th running of the Kentucky Derby is Saturday, May 5th. (AP Photo/Kiichiro Sato)

LOUISVILLE, Ky. (AP) — Todd Pletcher is throwing numbers at the Kentucky Derby again. Bob Baffert is seeking a fifth victory and he’s got the favorite, too. An old jinx could be disproved, and history would be written if Mendelssohn wears the garland of red roses.

The 20-horse field for Saturday’s 144th Run for the Roses includes a handful of top contenders who have been consistent this spring.

Justify was the 7-2 favorite in early wagering Friday. Trained by Baffert, the Southern California colt, however, is green, with just three starts.

“We have a good enough horse that can win it, but it’s a very competitive race,” Baffert said. “You’re going to have to have some luck.”

Justify is undefeated and Magnum Moon is 4-0, neither having run as a 2-year-old. They’ll be trying to upend a so-called curse: No horse since Apollo in 1882 has won without racing as a juvenile.

Arkansas Derby winner Magnum Moon is one of four horses to be saddled by Todd Pletcher, who won last year’s Derby with Always Dreaming.

Pletcher’s Audible was the co-third choice at 6-1 with Mendelssohn on Friday. Along with Magnum Moon, Vino Rosso and Noble Indy were double-digit longshots for the trainer, who is tied with mentor D. Wayne Lukas for the most Derby starters with 48.

Mendelssohn has the least amount of time on the Churchill Downs dirt than any horse in the field. The Ireland-based colt made his first appearance Thursday — drawing attention with his screeching — after spending the first part of the week in quarantine for Aidan O’Brien. The trainer is 0 for 5 at the Derby, the biggest victory to elude him.

Mendelssohn was an 18 ½-length winner of the UAE Derby. His regal bloodlines and $3 million price tag suggest he would be a worthy champion, but no Europe-based horse has won the Derby.

My Boy Jack moved up to the 5-1 second choice in early wagering Friday. The closer is trained by Keith Desormeaux and ridden by Kent Desormeaux, a three-time Derby winner and Keith’s brother.

Despite Good Magic’s top-notch credentials, he was relegated to the 7-1 fifth choice on Friday. He won the Breeders’ Cup Juvenile and claimed an Eclipse Award as last year’s 2-year-old champion. The colt won the Blue Grass last month, one of six victories at six different tracks.

Getting the ideal trip in the Derby is critical, especially with the traffic from 20 horses making a chaotic charge into the first turn. Jockeys want to avoid anything that would prevent their horse from getting into rhythm, like being bumped, cut off or blocked.

“There’s so many horses in the field that seem like they have good chances to win the race with a clean trip,” said Chad Brown, who trains Good Magic. “I feel like we have one of them.”

“This is the best we’ve had him,” Ruis said.

Besides Baffert, four other Hall of Fame trainers are in the race: Steve Asmussen (Combatant), Jerry Hollendorfer (Instilled Regard), Lukas (Bravazo) and Bill Mott (Hofburg). Baffert and Lukas are tied for the second-most wins with four each. None of the others has won a Derby.

“This may be as good a chance as I’ve ever had,” Mott said. “Some of the tougher horses in the race are fairly lightly raced.”

The frequently changing forecast for Saturday calls for a chance of rain at different times during the day. Post time is 6:46 p.m.