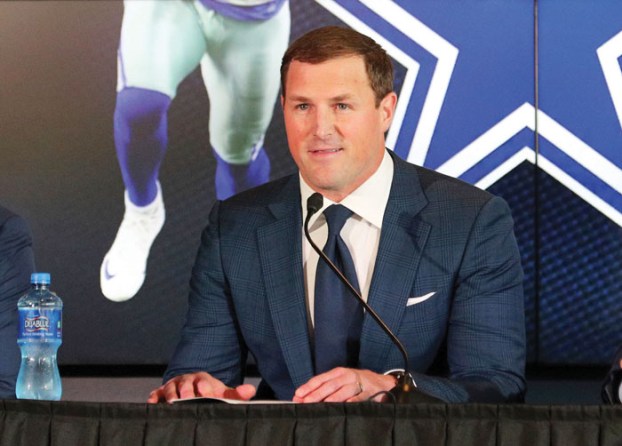 FRISCO, Texas (AP) — Jason Witten mostly held it together while announcing he was retiring after 15 years with the Dallas Cowboys to go into TV.

One wavering moment came when the tight end turned to owner Jerry Jones on a stage in front of his family, teammates and club employees in what normally serves as the dining room in the team’s practice facility.

“The hardest part of this decision was knowing that I would never be able to hand you that Lombardi Trophy,” Witten said during his 15-minute speech Thursday. “I told you back in 2006 that I would not let you down. I hope that in your eyes, I held up my end of the bargain.”

Just days away from turning 36, Witten is leaving to be the analyst for ESPN’s “Monday Night Football” telecast, a move the network confirmed after Witten’s retirement announcement.

The decision by the franchise leader in games, catches and yards receiving is the same one friend and longtime teammate Tony Romo, the club passing leader in yards and touchdowns, made last year with CBS.

They joined the Cowboys together in 2003 — Witten a third-round pick out of Tennessee and Romo the undrafted quarterback three years from becoming the starter. They left without getting Dallas to an NFC championship game; the Cowbyys won the last of their five Super Bowls in 1995.

“Jason has given so much to this team, to this franchise. He emptied the bucket here,” Jones said, responding to a question about that missing Super Bowl after speeches by all three on stage: Witten, Jones and coach Jason Garrett.

“When I look at where we were with the great legacy of our fans that have had 56 years of being around some of the greatest people and names of players ever … to me, no one has ever given more of himself and no one has ever made any bigger impact.”

The circumstances for Witten and Romo were different. The Cowboys were anticipating a 16th season, which would have been a club record, from their 11-time Pro Bowl player. Romo had lost his job to Dak Prescott while injured and was deciding last offseason whether to play elsewhere.

As recently as two weeks ago, Witten suggested he might play until he was 40 and said he “absolutely” was returning. He acknowledged the offer from ESPN changed things.

“In those moments, those other things didn’t exist,” said Witten, set to call the Cowboys’ home game against Tennessee on Nov. 5. “I was certain when I went through it that I wanted the blessing of Jerry and his family, an opportunity I have to stay around the game.”

Dozens lined Witten’s walk from the entrance to the team’s headquarters, down some stairs and a long hallway to the dining room.

His retirement ceremony, with Prescott and star running back Ezekiel Elliott watching from the same row, came not far from a huge picture of Witten’s signature moment — a 2007 game when he ran nearly 30 yards and was tackled without a helmet after it was knocked off.

The Cowboys hung that picture over the entrance to their indoor practice field long before Witten pondered retirement. He spent two seasons walking under it.

“Whenever young kids come to me up and ask me, ‘How do you grow up and play for the Dallas Cowboys, and have that type of career?’” Witten said. “My answer was always the same, the secret is in the dirt. I was never the most talented, never the flashiest, I relied on grit.”

Witten was also known for durability, holding club records for consecutive games (235) and starts (179). He missed one game, the fifth of his rookie season because of a broken jaw, and returned 23 days after rupturing his spleen in a preseason game to play the 2012 opener.

With 1,152 catches for 12,448 yards, Witten joins Tony Gonzalez as the only NFL tight ends with at least 1,000 catches and 10,000 yards. His 15 seasons are tied for the most in Dallas with defensive end Ed “Too Tall” Jones, safety Bill Bates and late offensive lineman Mark Tuinei.

“He’s one of the best and most complete tight ends ever to play this game,” Garrett said. “The stats and the credentials speak for themselves. They don’t really begin to tell the story. Over the last 15 years, he’s played virtually every play.”

Witten is third on the Cowboys’ list with 68 touchdown catches. He trails Dez Bryant, released last month with 73 TDs, and Hall of Famer Bob Hayes (71).

Without Witten and Bryant, the Cowboys are missing their top two receivers from last year and essentially for the past six seasons. Among the tight ends left behind, only one has a catch in a regular-season game: Geoff Swaim with nine over three seasons.

The Cowboys are high on Blake Jarwin and hope that former Baylor basketball player Rico Gathers can develop after missing his entire second season with a concussion. Dallas drafted Stanford’s Dalton Schultz in the fourth round last week.

“There’s an old saying in pro football, the circus doesn’t stay in town forever,” Witten said. “And when you’re young, I think it takes on a meaning that when your opportunity comes, grab it. I’ve decided that the time has come for me to pass the torch to the next generation of Dallas Cowboys.”