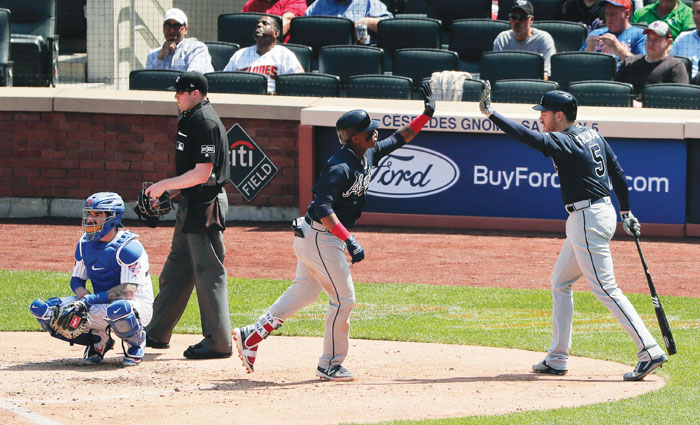 Atlanta Braves' Ronald Acuna Jr., center, is greeted by Freddie Freeman after hitting a solo home run against the New York Mets during the fifth inning of a baseball game, Thursday, May 3, 2018, in New York. (AP Photo/Julie Jacobson)

NEW YORK (AP) — After a three-game wipeout of the New York Mets, the Atlanta Braves were flying — and not just because they were heading home.

The first-place Braves — that’s right, the NL East-leading Braves — just might be starting to convince a jaded fan base to believe again.

Julio Teheran took a no-hit bid into the seventh inning , 20-year-old Ronald Acuna Jr. hit his second big league home run and a 11-0 rout Thursday completed a 7-3 trip that vaulted the young Braves atop their division.

Players and manager Brian Snitker were looking ahead to a weekend series against San Francisco at SunTrust Park, where just two of the first 12 home games sold out this season.

“I think they’re going to be pumped. I think they’ll be rockin’ tomorrow night,” Snitker said. “After the road trip we had, the style, the way these guys are playing — I mean, they’re leaving it out there every night.”

Kurt Suzuki , Acuna and Nick Markakis homered as the Braves built a 6-0 lead by the fifth inning against Jason Vargas (0-2), and 21-year-old Ozzie Albies went deep off an equally shaky Matt Harvey in a five-run seventh.

Atlanta has won five in a row and opened a 1½-game division lead, the latest in a season the Braves have been in first place since July 20, 2014.

“If the fan base wasn’t already excited, I don’t know what will,” said Freddie Freeman, the only Atlanta player left from the group that walked off the field in first place against the Phillies that afternoon.

Atlanta is coming off three straight 90-loss seasons and four straight years with sub-.500 records. The rebuild has gone faster than expected, sparked by the two youngest position players in the major leagues. Albies’ 10th homer tied for the NL lead. Acuna, playing just his eighth big league game, hit a drive into the second deck in left field that would have gone 451 feet unimpeded, according to MLB Statcast. Atlanta is 7-1 since the arrival of Acuna, who is hitting .382.

“It’s that energy that these guys bring,” Suzuki said. “Seeing them come up here and do their thing, it’s pretty fun to be around.”

Atlanta outscored the Mets 21-2 in the series and outhit them 41-15, pitching consecutive shutouts for the first time since the final three games of 2015 against St. Louis.

Teheran (2-1) was virtually untouchable until Asdrubal Cabrera doubled into the right-field corner with two outs in the seventh on a 1-2 curveball. Michael Conforto walked and Adrian Gonzalez loaded the bases with an infield hit before Amed Rosario popped up.

Pitching on five days’ rest after cutting a start short at Philadelphia because of a tight trapezius muscle in the right side of his back, Teheran allowed two hits in seven innings, struck out six and walked two. He retired his first 11 batters, walked Yoenis Cespedes on a 3-1 count in the fourth, then got nine more outs in a row before Cabrera’s hit.

Teheran’s velocity topped out at 92.3 mph, 4.8 mph higher than against the Phillies.

“I know that it was something bothering me. That’s why I was throwing that slow,” Teheran said.

He also had two hits and a sacrifice fly, and every Braves starter except Teheran scored a run. Jesse Biddle and Max Fried finished a three-hitter.

On a summer-like afternoon with a game-time temperature of 90 at Citi Field, the Braves improved to 9-1 in day games.

New York was shut out for consecutive games for the first time since the Chicago Cubs blanked the Mets on June 30 and July 1, 2015. Before Cabrera’s double, 40 of New York’s previous 42 batters had made out.

Vargas lowered his ERA from 22.09 to 16.20 despite giving up six runs and 11 hits in 4 2/3 innings during his first home start for Mets since May 17, 2007, at Shea Stadium. Sidelined since late spring training by a broken hamate bone in his right hand, the left-hander allowed nine runs over 3 2/3 innings at San Diego last weekend in his big league season debut.

Markakis hit a go-ahead double and scored on Suzuki’s two-run homer as Atlanta increased its major league-leading total of first-inning runs to 32. Acuna homered leading off the fifth, and Markakis hit a two-run shot.

“I’m throwing quality pitches early in the count and then just not making the quality pitch to put the hitter away,” Vargas said.

Harvey made his fourth relief appearance after losing his starting spot and gave up Albies’ three-run homer in a five-run seventh. Callaway thought Harvey looked stiff.

“There’s some positives out of today other than obviously the numbers,” Harvey said.

“Still trying to figure out the workout schedules and the throwing programs and all that stuff to be ready.”

Mets: RHP Jacob deGrom is on track to take his next turn in the rotation Monday at Cincinnati after a scan and examination determined no major injury occurred when he hyperextended his pitching elbow while batting Wednesday.

Braves: RHP Mike Foltynewicz (2-1), who has not gotten an out in the seventh inning in six starts this season, will be on the mound Friday, when the Giants start RHP Chris Stratton (2-2)