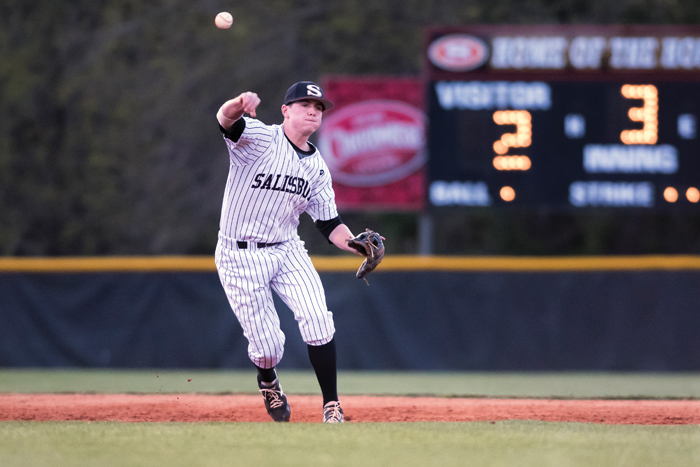 But the fourth-seeded Hornets failed to fly through it, squandering a three-run lead and falling to Ledford, 5-4, in the CCC tournament championship game.

“If we field it cleanly in the third inning, if we make a play or two, we’re still ahead 3-0,” reasoned coach Mike Herndon, moments after Salisbury (15-10) stranded the potential tying run at second base in the final inning. “But we didn’t. That’s baseball.”

It was unsightly baseball at that. The teams combined for six errors. Ledford’s last three runs were unearned and all of Salisbury’s were.

“We had the capability to easily beat them.” said Salisbury catcher Bo Rusher. “We knew they were really low on pitching because their two best guys had already reached their pitch counts. Then we scored three times in the first inning. We had them right where we wanted them.”

They did — and they didn’t. The Hornets reached winning pitcher Will Bethune for three runs in the top of the first, thanks chiefly to three Ledford errors. The key blow was Jack Fisher’s two-out, two-run double into the left-field corner that turned the Salisbury dugout into a human trampoline.

“It was an 0-2 pitch,” said Fisher, a left-handed batter. “I wasn’t trying to hit the ball hard, just make good contact. I saw the outside pitch and put it over the third-baseman.”

It was one of Bethune’s few mistakes. The junior right-hander settled down and pitched a complete-game five-hitter, struck out seven and retired 15 of Salisbury’s final 17 batters.

“My demeanor on the mound was a little lackadaisical at the start,” he said. “I wasn’t awake enough. I wasn’t pitching my game.”

Winning coach Chris Adams must have set Bethune’s alarm clock for the second inning. He fanned Rusher with two on and two away to escape unharmed, then set the Hornets down in order in the top of the third.

“In our situation, he’s our No.3 pitcher,” Adams said, after Ledford (22-3) improved to 9-1 over its last 1o games. “But on a lot of other teams, he’s a one or a two. The good thing is he’s not a ‘me’ guy. He knows his role, whether he’s a reliever, a starter in the middle of the week, or the guy who takes the ball in a championship game.”

Starting pitcher Griffin Myers gave a gallant effort for Salisbury. Still nursing a sore right arm, he pitched with guile and bravado for two innings in just his second start of the spring. In the last of the third he faltered, yielding Logan Whitaker’s run-scoring double that skipped to the wall in left-center field and Noah Soles’ two-out base hit that trimmed Salisbury’s lead to 3-2.

“(Myers) had a good fastball and good command,” said Ledford catcher Avery Cain. “He threw hard. But I don’t think his off-speed stuff was there.”

Neither was his support. Before the third inning was over, Ledford tied the score on an infield error. Salisbury reclaimed the lead in the top of the fourth when Blaine Shellhorn beat out an infield hit, stole second base and used a delay tactic to reach third on Will Taylor’s groundout to the left side. When a determined throw from first-baseman Whitaker sailed over third-baseman Justin Vaughn’s head, Shellhorn trotted home with the go-ahead run.

“We, as a team, were not at our best defensively,” said Adams. “Luckily, we all settled down and found it.”

Ledford found the game-tying and decisive runs in the bottom of the fourth. After Myers issued a leadoff walk and was relieved by right-hander Joe Steinman, the Panthers used a sacrifice bunt, a wild pitch, a costly infield error and Whitaker’s two-out, two-run double to deep left to take their first lead. It was Whitaker’s second double of the night.

“He’s the reason we’re even playing tonight,” Adams said. “He got the winning hit — a two-run double in the bottom of the seventh — against West Davidson (in Tuesday’s semifinal victory).”

The rest was up to Bethune, who pitched with visible confidence down the stretch. With Salisbury’s Parker Lippard on second base and one out in the seventh, he caught Vance Honeycutt looking a 1-2 fastball. “Down and away, right on the black,” he reported. “It’s the pitch I was looking for all night.”

His 95th and last one resulted in Myers’ game-ending foul-out.

“We played a very good team and had our chances,” Herndon said afterward. “We competed. We gave everything we had. That’s all we can ask our kids to do. Now we’re playing for our lives. The next time we lose, we take inventory.”

NOTES: Pairings for the 2A state playoffs will be announced Monday and first-round games will be scheduled Tuesday and Wednesday. … Myers and Steinman limited Ledford to four hits. … SHS center-fielder Will Taylor made a skidding catch to rob Cain of an extra-base hit in the second inning. In the third, Fisher scaled a slope in deep left-center and snagged Chris Villaman’s line drive.