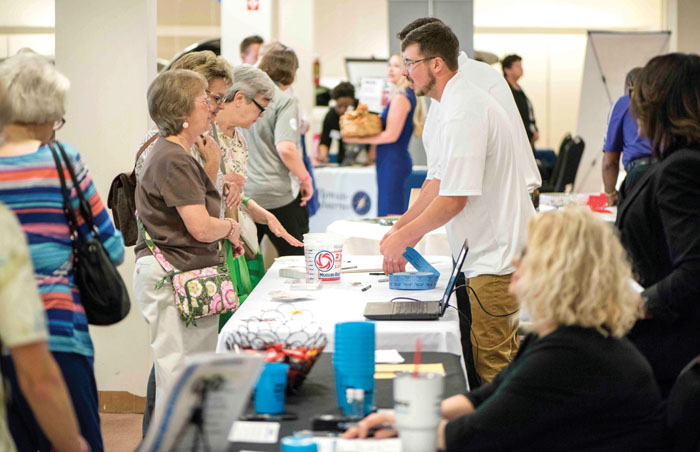 SALISBURY — Elaine Spalding says she wants to grow both existing businesses and the “entrepreneurial base.”

That’s one of the reasons, Spalding said, that this year’s Rowan County Chamber of Commerce trade show had the theme “Sharing Our Entrepreneurial Spirit.”

“The whole theme around this one is entrepreneurial development,” said Spalding, the chamber’s president. “And so we have a whole area of experts that are offering marketing advice and accounting advice and legal advice.”

One of those experts was Rowan IDEA Center Project Manager Addison Davis, who had a booth at the edge of the West End Plaza events center.

Davis said that within the first 30 minutes Thursday, he saw two things happening.

“One, I have people who are very interested in what we’re doing coming by the booth. Which is nice. I’ve had a very good pass by, shall we say,” Davis said.

The second, he said, was that he saw owners of existing businesses who are thinking of expanding, or “scaling,” their businesses.

“Scaling is taking it from a lifestyle business or a home-based business or even something small and working through the IDEA Center to vet that operation to make sure that, if they want to grow it, that they can successfully grow and find investors,” Davis said.

Davis said he had already spotted a few businesses that had “a distinct potential” for that kind of growth.

“So if someone is interested in doing that, as we develop the IDEA Center and get our classes going and the incubator operating, they could participate in that and grow their business into something more than a lifestyle, local business and make it into a statewide or national business,” Davis said.

Davis said one of the purposes of the IDEA Center — which opened last year and is just a few feet from where the trade show was held in the old Salisbury Mall — is to help spur economic growth.

Chamber board Chairwoman Janet Spriggs said the annual trade show is for more than just businesses.

“Because there will be a lot of just community patrons that come just to see what kinds of businesses are in Rowan County and what they might be interested in or need,” Spriggs said.

Spriggs said she was excited to see so many small, medium and large businesses come together to “share with the community what they have to offer.”

“I think especially for the smaller businesses, it’s really important to let people know what they’re all about and what they do,” Spriggs said. “Because sometimes you see the name of the business and don’t understand.”

That is true of Bread Riot, said Carol Corken, a member of that nonprofit group’s board.

Corken said the group is named for a “bread riot” that happened in Rowan County during the Civil War in which wives protested a steep price increase for flour.

Corken said it was “absolutely” worth the investment to reserve a trade show booth to get the group’s name out into the community.

Spalding said booths cost between $275 and $300, depending on when businesses register.

“And I think it’s neat if you look at how people decorate their booths,” said Teresa Dakins, chairwoman of the trade show committee. “When I was walking today, it was really amazing how big some of the people went.”

Dakins and Spriggs said the trade show is something businesses look forward to all year.

The show was free and open to the public. It featured more than 60 booths.

Spalding said this year’s attendance was higher than it has been in recent years. An estimated 1,500 people came to the show, versus 1,200 who had come to other recent shows.

Spalding said there might have been more attendees this year because a number of businesses had higher first-quarter revenues than in recent years.

“Their business has been really good, the economy has been good. So I think more people are finally looking to try to expand their business, maybe add more employees, add more products and services,” Spalding said. “So, you know, economic indicators are good for Rowan County, and we’re real pleased to be able to do the trade show in a time that people can participate and support each other and buy local.”