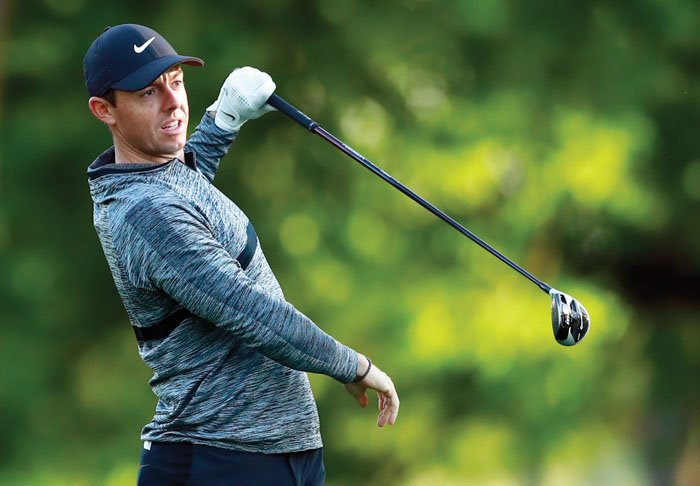 Rory McIlroy, of Northern Ireland, reacts to his approach shot on the 10th hole during the first round of the Wells Fargo Championship golf tournament at Quail Hollow Club in Charlotte, N.C., Thursday, May 3, 2018. (AP Photo/Jason E. Miczek)

CHARLOTTE (AP) — John Peterson started his rookie season on the PGA Tour about the time Tiger Woods started to experience back problems.

One of them is closer to walking away than the other.

Peterson, the 29-year-old free spirit who has pledged to retire from golf’s vagabond lifestyle if he doesn’t earn enough money to keep his card in three events, made back-to-back eagles late in the opening round Thursday for a 6-under 65 that gave him a two-shot lead in the Wells Fargo Championship.

Woods had an unspectacular round of 71 in his return to Quail Hollow after a six-year absence — mostly due to his balky back — and figured it would keep him and everyone else fairly close to the lead on a course that made it tough for anyone to get separation.

That was before Peterson came to life late in his round.

He holed a bunker shot from just under 60 feet away on the par-5 seventh hole. Then he holed a 56-degree wedge from 107 yards in the fairway for eagle on the next hole. It almost got even better. From the trees left of the ninth fairway, his approach cleared the bunker and was headed for the flag as the crowd — “seven or eight people and a Golden Retriever in the grandstands back there,” he said — began to cheer in anticipation.

It missed. He missed from 8 feet. All was well.

Peterson had never led after any round in 89 starts on the PGA Tour, and he didn’t seem all that worked up over it.

“I’m kind of free-wheeling it at this point,” he said. “I know a little bit has been said about me retiring if I don’t make the necessary money for my medical starts, and all that’s true. If I don’t make it, I’m not playing golf anymore.”

He made clear on more than one occasion he wants to win the Wells Fargo Championship, or the two tournaments he has left. Because of surgery on his left hand two years ago, Peterson started the year needing to make $375,165 in eight tournaments to keep his card. Five events later, he still needs $318,096 and has this week, and then the FedEx St. Jude Classic and Travelers Championship.

He loves golf. He also is a father — his son was born in October — and he would be just as happy in real estate development with a few friends in Fort Worth, Texas, than chasing around birdies and bogeys from one coast to the other.

If he wins this week? Or even if he makes enough money to keep his card?

“Either way is fine with me,” Peterson said. “I’ve got everything in place for both sides of it, so I’m not going to be bothered if I make it. Obviously, I would never be bothered to win a golf tournament out here.”

But it’s early, and he knows that from experience. Peterson was in the final group going into the weekend at the Sony Open, three shots out of the lead, when he shot 74-69 and tied for 47th.

Peterson was only part of the show on a warm and breezy day at Quail Hollow, site of the PGA Championship last summer.

Johnson Wagner, a member at Quail Hollow, also had back-to-back eagles when he drove the green on the par-4 14th to 6 feet, and then hit the green on the par-5 15th hole and made a 45-foot putt. He wound up in the group of five players at 67 that included PGA Tour rookie Keith Mitchell and Tyrrell Hatton.

Rory McIlroy, a two-time winner at Wells Fargo, was among 10 players at 68. Paul Casey and Jason Day were among seven players at 69.

Even with Peterson’s big finish, there was some truth to Woods’ assessment when he finished at 71.

“The way this golf course is set up and the way it’s playing right now, the guys are going to be stacked,” Woods said. “We’re all going to be close. There’s going to be probably, I’m guessing, 15 guys or so with a chance on Sunday.”

Woods had back-to-back birdies on the holes where Peterson made his eagles, getting him to 1 under. But he hit a poor wedge that led to bogey on the par-5 10th, atoned for that with a birdie on the par-5 15th, only to give back that shot with a three-putt bogey from 15 feet on No. 16.

It was a tough adjustment for Woods and everyone else. The greens were firm, with balls bouncing high upon landing. But the surface was a little on the slow side, and several players left putts extraordinarily short.

“I hit the ball fine today,” Woods said. “If I just make a few putts, I should be 2- or 3-under par, which is fine. I just didn’t make anything today.”

“I don’t see him retiring anytime soon,” Peterson said with a smile. “He can obviously still play with everybody out here.”