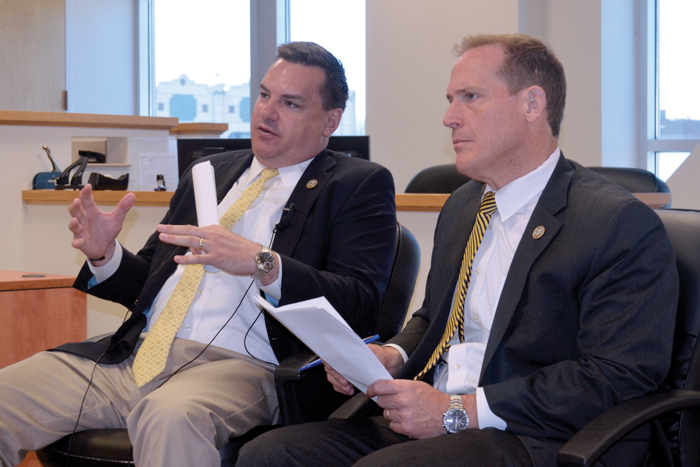 SALISBURY — The two congressmen who represent parts of Rowan County on Wednesday hosted a discussion with local professionals combatting a problem with global reaches: human trafficking.

The talk by U.S. Reps. Richard Hudson, R-8, and Ted Budd, R-13, followed the recent approval by Congress of legislation on the topic.

The legislation on online sex trafficking became law on April 11. It amends the Communications Act of 1934, closing loopholes and making it easier to target websites with legal action for enabling trafficking crimes.

“We’ve seen an 87 percent drop in online sex-trafficking ads since this legislation was signed a few weeks ago,” said Hudson.

Budd and Hudson each asked what more could be done to help service providers better meet the needs of human-trafficking victims.

“There is not one silver bullet that we can use to solve this, but it’s bill like this after bill like this,” said Budd. “That’s what we do as legislators. We want to create an environment where you all can do your work, where you have the tools as law enforcement or in the rescue community.”

Some participants voiced common needs in their various agencies, including increased funding, more housing for victims, and greater community and service provider awareness.

“I have no doubt in my mind that we have a bigger issue than I’m able to pay attention to, and that all directly relates back to funding,” Stokes said. “It’s great to have legislation out there, but the reality of enforcement is I’ve got to have people to work on those cases.”

Carla Tweddale, president and founder of Lily Pad Haven, an organization that houses and treats victims of human trafficking, said funding is a challenge in her program as well.

Its overhead costs are low, but the victims Lily Pad serves need a high and costly level of care, with in-house counseling, case management and coordination, she said.

“We cannot continue to grow unless we have the funding to do that,” Tweddale said.

Chief Deputy David Ramsey of the Rowan County Sheriff’s Office said another problem is lack of places for survivors of human trafficking to go.

“We identify them, we get them and no matter how many resources we have in order to do the investigations and put the bad guy in jail, we don’t have the resources and the safe places to put those folks,” Ramsey said. “That’s something I think is paramount in helping to fix this problem.”

And he’s right, according to Tweddale. When she started Lily Pad Haven in 2011, there were only 98 beds across the country available explicitly for human-trafficking victims.

Lily Pad Haven has since added eight. But there are millions being trafficked nationwide, she said.

Another suggestion to help reduce the startling number is to provide more education and awareness services for the public and service providers.

This includes everything from salon and hospitality workers, to hospital and urgent care providers, to members of the faith community and law enforcement.

Sherry Earnhardt, Rowan County’s 911 supervisor and a board member for Triad Ladder of Hope, said she has recently trained Sheriff’s Office staffers on the signs of trafficking.

She said officers are already picking up on signals that they wouldn’t have previously.

“By simply giving them a different lens to view the job that they do every day, to look at it a little bit differently, they were already identifying victims so that they could go forward,” Earnhardt said.

Hudson said a bill that just passed the House of Representatives would provide that health care providers are better trained to identify victims.

“We need to train our providers on subtle clues, what to watch for, what to look for and then what to do when that occurs,” Caldwell said. “Those are continuing needs that we have, particularly with the emergency department, the urgent care centers.”

The dialogue among service providers extended for nearly an hour, with professionals exchanging ideas for continuity of services, including training for students at Rowan-Cabarrus Community College or congregations like Cornerstone Church.

“One of the cool things about doing this is there is a lot of collaboration that is happening,” said Hudson. “But there’s a lot more that could be happening.”