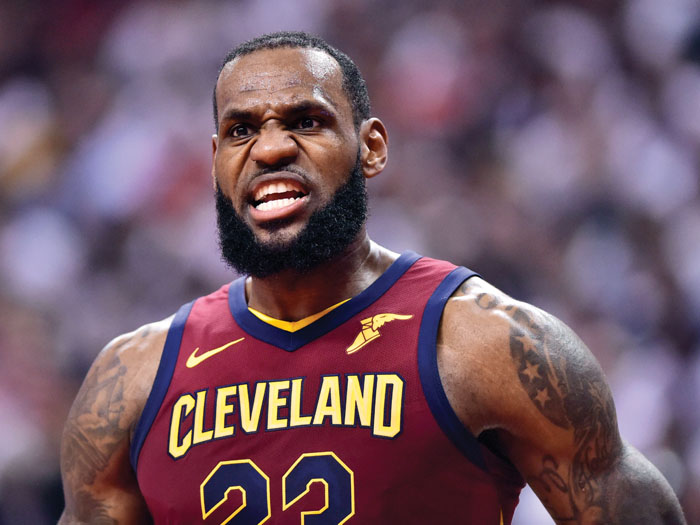 Cleveland Cavaliers forward LeBron James has words for the referees during the first half of Game 2 of an NBA basketball playoffs second-round series against the Toronto Raptors on Thursday, May 3, 2018, in Toronto. (Frank Gunn/The Canadian Press via AP)

TORONTO (AP) — LeBron James had 43 points and 14 assists, Kevin Love added 31 points and 11 rebounds, and the Cleveland Cavaliers beat the Toronto Raptors 128-110 on Thursday night to take a 2-0 lead in their second-round playoff series.

J.R. Smith scored 15 points, Jeff Green had 14 and George Hill 13 as the Cavaliers posted their eighth consecutive postseason victory over the Raptors and halted Toronto’s four-game winning streak in Game 2s. The Raptors entered 6-1 all-time when playing Game 2 at home.

James had eight rebounds, narrowly missing his second straight triple-double. He connected on 19 of 28 attempts, while Love shot 11 for 21.

DeMar DeRozan scored 24 points and Kyle Lowry had 21 for the Raptors. Toronto won a team-record 59 games and finished as the top-seeded team in the Eastern Conference this season, but was easily shoved one step closer to a third straight postseason exit at the hands of James and the Cavs.

Jonas Valanciunas had 16 points and 12 rebounds and Fred VanVleet scored 14 points, but the Raptors lost back-to-back home games for the first time all season.

BOSTON (AP) — Rookie Jayson Tatum scored 21 points and hit a pair of free throws in the closing second, and Boston rallied from a 22-point deficit to beat Philadelphia and take a 2-0 lead in the Eastern Conference semifinals.

Terry Rozier added 20 points, nine assists and seven rebounds. Marcus Smart finished with 19 points and five rebounds as the Celtics improved to 6-0 at TD Garden this postseason. They have never blown a 2-0 lead.

Game 3 is Saturday in Philadelphia.

and nine rebounds. Joel Embiid finished with 20 points, 14 rebounds and five assists, but rookie star Ben Simmons missed all four shots and had just one point.