Have fun with ‘Barefoot in the Park’ 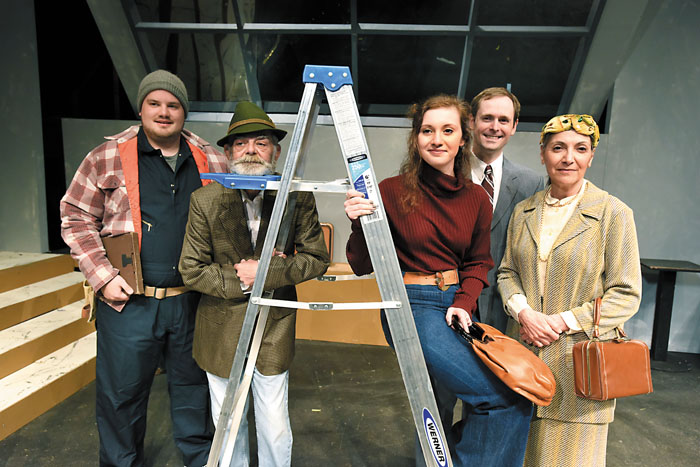 Now would be a good time to walk “Barefoot in the Park.” Just head to the Meroney Theatre on South Main Street and see a heart-warming production of the play.

You might remember the movie, starring Jane Fonda, Robert Redford, Mildred Natwick, Charles Boyer and Herb Edelman. It was based on the Neil Simon play you can see on the Piedmont Players stage.

Corie is a free spirit, flitting from passion to passion, always seeking her mother’s approval.

Paul is the stable one, a lawyer who likes to look before he leaps, if he leaps at all.

Newkirk is young and bouncy and sometimes a little shrill as Corie argues with Paul about being more spontaneous. Campbell, a veteran of both Piedmont and Lee St. theatre, is perfect for the part. At times passionate, then somber, enthusiastic and cautious, Campbell embodies poor Paul, who wants to do the right thing in the right way.

Jean Kadela is so nice as Corie’s mother, Mrs. Banks, who has a lot more in common with Paul than her own daughter. Kadela has to be shocked, exasperated, understanding and supportive, and her late scene with attic neighbor Victor Velasco is pure fun.

Victor is played by veteran Gary Thornburg, whose comedic timing is right on. Victor must be outrageous and sympathetic for the play to work, and Thornburg can do both well.

Ryan Pegarsch plays the hapless telephone repairman who has to brave the six flights of stairs — if you count the stoop outside — up to the apartment not once but twice.

That’s a running gag, the long climb to the garret-like apartment that Corie picked out all by herself. It features a massive skylight — that leaks snow — little to no heat, a bedroom too small for a double bed and a closet that’s dripping wet.

Simon’s comedy relies so much on wordplay, so be sure to listen, especially to Paul’s pseudo-legal phrases and retorts. Mrs. Banks has quite a few of those, too.

The plot is simple — opposites attract. Corie needs to tone down her flights of fancy and Paul needs to let go a little. When they meet Victor Velasco upstairs, he is the catalyst for change, as well as a good foil to show how free-spirited Corie can be compared to Paul’s “stuffed shirt” attitude.

One disagreement, and Corie says the marriage is over. Over! Their first fight is a doozy. Paul tries to remain calm, but she pushes all his buttons. Then, the well-timed cool-off brings all the parties back together, complete with assumptions and misunderstandings that turn out to be pretty silly and funny.

Paul ends up walking out on the ledge of the apartment to prove to Corie he is willing to take risks. And Mrs. Banks loosens up a little, too, learning that life is not over once you hit 50.

Director Reid Leonard designed a set that’s true to the original, with the theme of steps continued all over the stage.

The play, which takes place in a brownstone in New York City in February, debuted on Broadway in 1963, and there are plenty of 1960s clues in it. But it could be set almost any time. These arguments go on and on, generation after generation.

It’s a funny evening, with plenty of awwws, but children won’t get much out of it except for the physical comedy.

Underwritten by Crescent Construction Services and First National Bank, “Barefoot in the Park” continues at 7:30 p.m. Saturday and May 9-12 at at the Meroney Theater, 213 S. Main St. There will be a 2:30 p.m. matinee on Sunday.