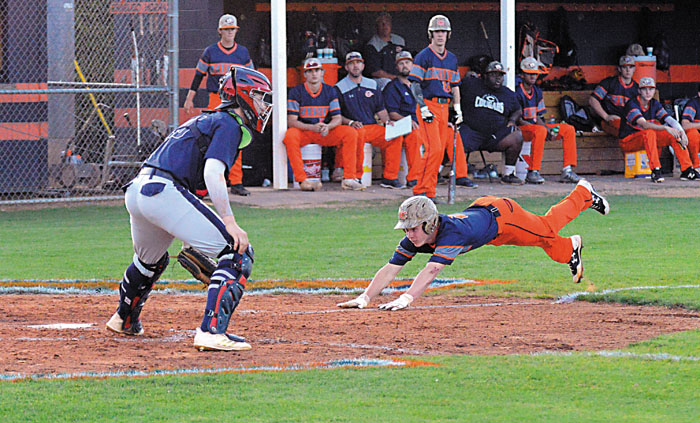 CHINA GROVE — The path to the state 3A baseball playoffs has already been determined for both Carson and East Rowan.

Nonetheless, the battle for the North Piedmont Conference tournament title last night featured the expected level of quality pitching and defense, and especially, a lot of intensity from the two rivals.

The Cougars (21-5) took the lead early, then rode the pitching of ace Owen White and a flashy defense to claim the NPC title, 5-1, Thursday night at Carson’s field. The visiting Mustangs (18-7) battled until the end, which is exactly what veteran East coach Brian Hightower expected.

“It was pretty intense but why wouldn’t it be?” Hightower said afterwards. “It was Carson and East after all and anytime we play, it is going to be a great game. It is great to be in this atmosphere because it gets you ready for the playoffs.”

As has been the case for much of the season — especially with White on the mound —Carson played to its strengths of strong pitching and solid defense to post the program’s third conference tourney title and second league championship. White, a 6-4 senior, effectively scattered five Mustangs’ hits, worked around a pair of walks and struck out 10 batters.

“They (East) are one of the best teams in our league,” said White, as he improved to 8-1 for the season and avenged his only loss of the year. “I feel like I did my job tonight and all of my teammates did their jobs. Overall, we put on a great performance.”

White helped himself with a clutch two-out, two-run double down the left field line in the fourth inning, expanding a Carson lead to 3-0. “It was a hanging curve ball,” he said of the decisive pitch from East starter Will Brown. “When a pitcher makes a mistake, you have to make him pay.”

The extra cushion was important as East Rowan mounted a serious threat in the top of the fifth inning, with a trio of hits to cut the lead to 3-1. Singles by Trevor Scruggs and Jake Davis put runners on the corners, then lead-off man Hayden Setzer whistled a hard shot up the middle, scoring the run. It was significant because it was the first earned run allowed by White this season.

East loaded the bases with two outs on a walk, but White left them all stranded with a key strikeout of Charlie Klingler.

“Our guys did a great job tonight against a pitcher I considered the best in the state,” Hightower said. “An extra-base hit here or there would have been big for us but we couldn’t get it.”

The Cougars responded with a pair of insurance runs in the bottom of the fifth off Brown and reliever Jake Davis to make it 5-1. Doubles by Cole Hales (2-for-3) and Clayton Gilmore (2-for-3) and an RBI single by Garrett Alewine did the damage.

White breezed through the sixth inning and got two outs in the seventh before being lifted due his pitch count. Solly Holshouser came out to secure the final out on a grounder.

“Our guys did a really good job of staying focused tonight,” Carson coach Chris Cauble stated. “This was the third time they had faced Owen this year, so I wanted to be sure we played our game and not fall into a trap of what East does. We pitched it extremely well all year and played great defense all year and that will keep you in every game.”

Cauble noted the stellar play of his defense in the top of the sixth to maintain the 5-1 margin. A diving stop at shortstop by Cameron Prugh secured one out, Maddux Holshouser then stabbed a hot line drive at first base for out two. Holshouser then closed out the inning with his diving stop of a hot grounder and flipping it to White covering first.

“We played great defense when it counted,” said third baseman Hales, who made a couple of difficult plays himself to go along with his two hits. “It feels great to win the tournament, but we still haven’t reached all of our goals yet. We’ve got plenty of pitching and our bats are coming alive at the right time.”

Both teams are now set to host a first-round 3A playoff game, beginning next Wednesday. The Cougars are expected to be a top three seed while East Rowan will be seeded in the 8 to 10 range. Seedings and pairings will be announced Monday by the NC High School Athletic Association.

NOTES: Carson and East Rowan came in as the top two seeds in the NPC and both posted shutouts in the semifinals on Wednesday night. In the regular season, Carson won at East, 4-0, behind White, but the Mustangs claimed a 1-0 win at Carson on April 17, as Setzer out-dueled White, handing him his only pitching loss of the season.

The Cougars started the season 1-3, but have gone 20-2 since, entering the playoffs on a six-game winning streak.