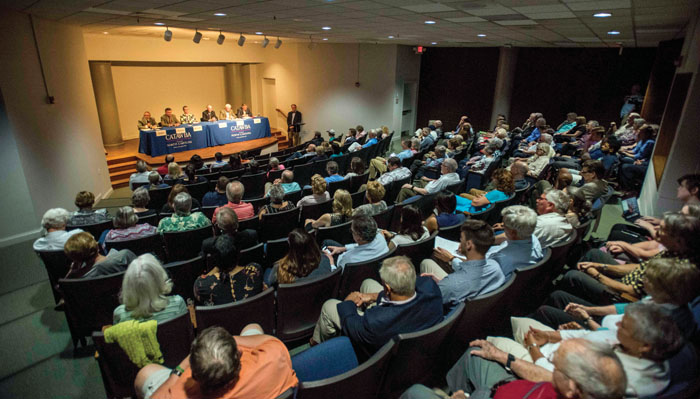 A forum for candidates for Rowan County commissioner was held in Tom Smith Auditorium of Ketner Hall on the Catawba College Campus on May 3. Jon C. Lakey/Salisbury Post

SALISBURY — As the candidates for Rowan County commissioner responded to questions from voters at a forum Tuesday night, a sensitive yet pressing topic arose: the school system’s growing capital needs.

The needs are estimated to be in excess of $200 million, as more than 40 percent of Rowan-Salisbury school buildings were built before World War II.

People at the forum wanted to know how the candidates propose addressing this monumental task.

Many audience members expectantly awaited candidate Jim Sides’ response. In his previous three terms on the board, Sides was known for a tense working relationship with the Board of Education.

His response hinted at this history. The commissioners have a legislative responsibility to provide for the school system’s capital needs, but the problem is twofold, Sides said.

“The local school system, the school board as a whole, has historically had a problem identifying needs versus wants,” Sides said. “… There are schools with vacant seats that could be filled by redistricting or allowing school choice. This would eliminate the need for some of the desired new schools.”

Sides also suggested looking at a $60 million to $70 million bond issue once the county pays off an existing debt service in 2021, an idea incumbent candidates Jim Greene and Greg Edds agreed would be worth exploring further.

According to candidate Craig Pierce, there is only one way to fund the massive need: grow the tax base.

“If you don’t grow the tax base, you don’t have the revenues to build the structures,” Pierce said.

Pierce also said that care needs to be taken when developing a long-term plan for replacing the old buildings. He said the county needs to look at redistricting so the proposed new schools don’t “end up being half-empty.”

Gone are the days of students walking to school, he said, and the county can’t afford to spend $35 million to $40 million per school because there’s not enough children to fill them.

“I think it falls down to the school board and their administration to be wiser about the locations of these schools,” Pierce said.

Challenger Michael Julian said he is not a proponent of higher-capacity elementary schools but that redistricting and consolidation are “something that is going to have to be done as a community.”

“I don’t think that is a conducive to learning, but it is something we’re going to have to look at,” he said.

Julian said the school board and Board of Commissioners need to work together to find a neutral agreement on what to do.

Edds agreed with Pierce on a need to grow the tax base but also praised the county board’s new working relationship with the Board of Education.

“A couple of years ago … the school board … tried to have an honest discussion about school consolidation, and they were soundly shut down in a horrible, political way,” Edds said. ” … (Now) we’re actually sitting down and having positive, fruitful conversations with the school board. Who knew that could happen?”

Incumbent Judy Klusman offered a different way to help the school system after joining her fellow incumbents in praise of a new working relationship.

She encouraged public and private partnerships and volunteerism in the schools, specifically with tutoring programs.

“All of us in the community, I believe, have a responsibility to partner with our schools,” she said. “I believe each citizen … (should) take that hour and help our children and our schools.”

Rowan County commissioner candidates forum to be shown on…