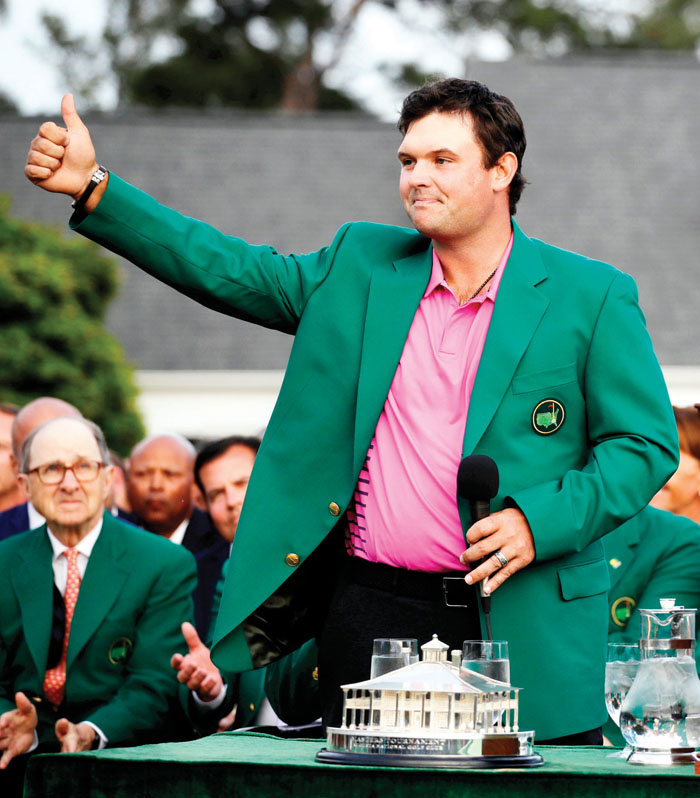 AP FILE Photo/Chris Carlson ... Patrick Reed gives a thumbs up after being presented with the championship trophy after winning the Masters golf tournament on April 8. Reed is playing this weekend in the Wells Fargo Championship in Charlotte.

CHARLOTTE (AP) — Patrick Reed took the week off before the Masters, and it paid off beyond the work he did on his game.

He also had time to get his eyes checked.

“First week ever wearing contacts, and I go ahead and make every putt I look at and win a golf tournament,” Reed said.

Reed said he had been struggling with reading at a distance — specifically the menu guide on his TV — when his wife, Justine, had seen enough. Reed recalled one moment when his wife and her parents could see the words, but everything was blurry to Reed.

“So we went to the eye doctor and next thing you know, I could see up close, but I can’t see anything past about 30, 40 yards,” Reed said Wednesday. “Everything was really blurry. So I got a prescription for contacts, put them in and all of a sudden I’m just looking out like, ‘Wow. I can see everything.’

“Now all of a sudden I can read greens pretty well,” he said. “And it worked at Augusta.”

Reed received the contacts a week before going to the Masters, where he had a one-shot victory for his first major. The only problem was putting them in.

“It would take me 30 minutes to 45 minutes to get them in,” he said. “Getting them out is easy. Putting them in, I was struggling. Now it’s easy, but wake up 15 minutes before you’ve got to leave that first week at Augusta? No chance. It was wake up an hour and spend 45 minutes on my eyes.”

Thomas said Sean Powell had sent him a direct message on Instagram laying out plans to ask Andrea Cota to marry him. Thomas was intrigued, and went along. It started on the first hole at Quail Hollow after Thomas had played the back nine of his pro-am.

He walked over to Powell and engaged in friendly conservation as if they were longtime friends. Powell introduced him to Cota. Before leaving, Thomas handed Cota a golf ball with the words, “Will You?” written on it. About that time, Powell was on his knees with the ring.

She was stunned. Thomas was beaming. Hugs were exchanged.

“It all worked out great, and I’m really happy that I didn’t screw it up for him,” Thomas said.

Walking away, Thomas asked if they would be out the rest of the week? When they said they hoped to, Thomas turned to a tour official, pointed at the newly engaged coupled and said, “Tickets.”

The last thing Cota said to her fiance: “How did you pull this off?”

The best round of golf for Shahbaz Hashmi was set up by the best essay he ever wrote.

Hashmi won an essay contest through The First Tee and Wells Fargo as part of a “Succeeding Together” program in which contestants were asked to write about how The First Tee affected their lives in a positive manner. The grand prize was a spot in the pro-am at the Wells Fargo Championship and first pick of the pros.

And then Tiger Woods entered the tournament.

“I mean, Mr. Woods is my hero unequivocally and I think a lot of us can say the same,” Hashmi said. “So I’m so grateful and I’m still in a little bit of a state of shock.”

The 17-year-old from San Antonio, Texas, held his own. Hashmi is captain of his golf team and headed to Indiana University next year.

“He hit it well, putted it well,” Woods said. “This is not an easy golf course. I know the tees are up for the amateurs, but it’s still a very hard golf course. I think he just did wonderfully. It was exciting to see him out there and his dad, and they were into it. You can tell that they’re very close to one another. That’s something that it was fun to see.”

Bob Baffert back at Derby with another favorite