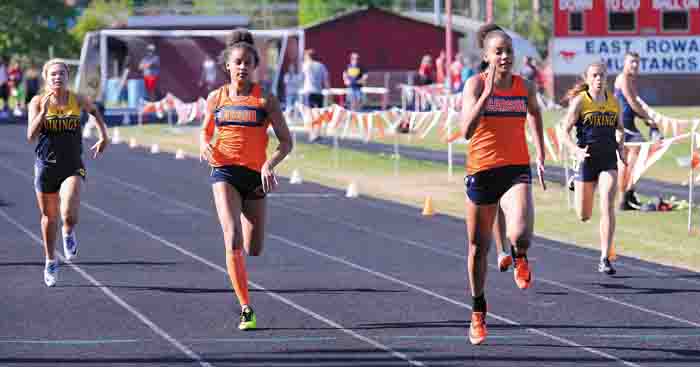 Wayne Hinshaw/for the Salisbury Post ... Carson’s McKenzie Gadson, right, won the 100 meter dash at the NPC track championships on Wednesday at East Rowan. Her sister, Mikaila, was second in the race. Carson won the team title, its first-ever in track and field.

Grabbing points across the board, tallying in every event except the pole vault, Carson put up 140 points. South Iredell was second with 131. After that, it was East Rowan (104), North Iredell (75), Statesville (55) and West Rowan (29).

“I don’t think I can point at any one thing as the key to winning this meet,” Carson head coach Ashleigh Kirkpatrick said. “We had to have everybody, and it was just so many different girls helping out. We know we’re going to do well in the sprints, but we got big points in the throws and the jumps. We had some girls that did a lot for us before leaving for their softball or soccer games.”

Freshman Lani Isley was immense. Before she headed to her soccer match, she won the shot put. Isley also took fifth in the triple jump, one spot behind Carson’s Maci Cooper, who stopped by the track before heading to play center field for Carson’s softball team.

The Gadson twins were huge, as always, for the Cougars — two heads, four arms and four long, flying legs. McKenzie won the 100 and 200, with Mikaila second in both events. McKenzie shared the sprints MVP award with South Iredell’s Olivia Cooney. Mikaila won the 400. In the 4×200, Carson unleashes both Gadsons and they teamed with Brianna Hargrove and Malia Hughley for a breezy victory.

McKenzie also had a third in the long jump on Tuesday. Both Gadsons were credited with scoring 28.5 points in the meet, including 2.5 for their share of the winning relay effort.

“Mikaila was very sick today, either allergies or a bad cold. and she had to leave school after half a day,” McKenzie said. “I was very proud of her to be able to compete as well as she did. She just kept pushing through even though she wasn’t at her best. We both did everything we could for our team.”

Carson got a helpful second place from freshman Isabelle Jerman in the high jump and benefited from a silver on Tuesday from Nancy Gamewell in the discus.

Carson also won because of the determined, dogged efforts of distance girls Taylor Wiggins and Olivia Gabriel, who had teamed with Isley and Taylor Conrad to win the 4×800 on Tuesday.

When the 800 meters rolled around late in the day on Wednesday, Gabriel’s fourth place and Wiggins’ fifth place went a long way toward clinching the title for the Cougars. They were exhausted, but they showed admirable fortitude.

Cooney, South Iredell’s co-MVP for sprints, won both hurdling events and was third in the 400.  South Iredell’s ShaKayla Robertson was MVP for field events for winning the triple jump and long jump. Robertson went 1-2 with teammate Nyzaza Wilson in those jumps. The Vikings also claimed victory in the 4×100.

East Rowan’s third-place effort was sparked by thrower Iyahnna Neal (first in the discus, second in the shot put) and hurdler/sprinter Katelyn Sprinkle. Sprinkle scored 18 points. She was second in both hurdling events and ran a strong first leg for the Mustangs in the 4×100 relay. Victoria Trexler added a third place in the high jump to her pole vault crown on Tuesday. Madison Lovingood placed third in both throws to add 12 points for the Mustangs.

Dazzling distance MVP Jonna Strange, a sophomore, personally accounted for 30 of fourth-place North Iredell’s 75 points. She swept the 800, 1600 and 3200.

Leading fifth-place Statesville was freshman Maddie Simmons. She was runner-up in the 1600 and 3200. Megan Rose won the high jump for the Greyhounds, matching Jerman’s 4-foot-8 clearance, with fewer misses.

Phillipe was West’s top individual. She was second in the 400.