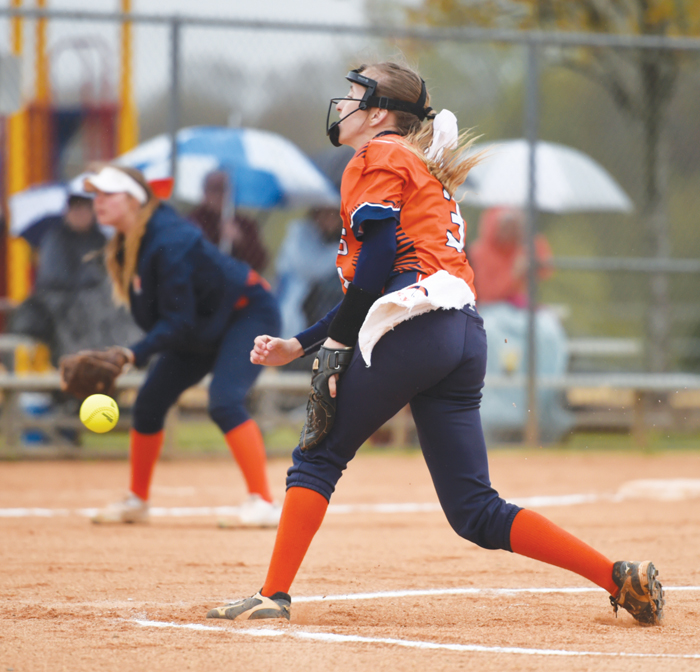 CHINA GROVE — Carson has been Rowan County’s strongest softball team down the stretch, and Thursday’s 5-0 win over West Rowan in the championship game of the North Piedmont Conference Tournament was just more of the same.

Rylie Stewart, who shut out West in Mount Ulla on Saturday to earn a share of the regular-season title, did it again. Kaitlyn Honeycutt, who had the key hit to beat the Falcons on Saturday, also did it again.

There’s nothing fluky about the Cougars. They’ve done everything right the last few weeks. They’re peaking at the time when teams want to peak.

“We played another solid game,” shrugged Carson shortstop Katie Jewell, who homered and drove in three runs. “Kaitlyn hit that big homer to give us the lead, and we got pumped up. We took it from there.”

Both teams are 16-6. This win meant county bragging rights for the Cougars, who went 2-0 against East Rowan, 2-0 against South Rowan and 2-1 against West, and it also meant a ton as far as playoff seeding. Carson gets the NPC’s top seed now, so it’s looking at a top-6 seed in the 32-team 3A West bracket. As the NPC’s No. 2 seed, West will slide down quite a bit.

“It’s a real tough loss for us,” West coach Jimmy Greene said. “We were playing for the tournament championship and the No. 1 seed. What this loss means is we’ll be on the road early in the playoffs, and Carson will be playing at home.”

Stewart, a right-handed senior headed to Greensboro College, has won her last six starts, with three straight shutouts, and Carson has won seven in a row. Stewart doesn’t have overpowering speed and she has an unusually low arm slot, but she also has sharp control and a tricky screwball. She ended Thursday’s game with a screwball for her seventh strikeout. The pitch appeared to be coming right down to the middle to Hannah Pratt, but as Pratt started her swing, the ball broke 6 inches toward her hands.

“I think even after we beat West the first time, a lot of  people didn’t think we could win tonight,” said Stewart, who stays loose and animated in the circle. “I just went out and pitched my game. I let it all go.”

Pitching in her home park, Stewart was tougher to hit than she was in Saturday’s 2-0 victory when her teammates played amazing defense behind her. This time, Carson fielders casually grabbed easy popups and fly balls. There weren’t many dives.

“Rylie was more in control of the game today,” Carson coach Charissa Duncan said. “We’ve been getting very good pitching and playing good defense, and that’s when you can start winning consistently.”

After a scoreless first inning, Honeycutt, who bats seventh for Carson, suddenly took one out of the park in the top of the second. It appeared West pitcher Hannah Roberts had made a decent pitch. Honeycutt was jammed some and didn’t get her bat all the way through the zone, but her hands are quick and the ball took flight toward left-center. It just kept going and carried over the fence.

“That pitch was high and inside and I thought it was just a popup at first,” Honeycutt said. “But I got to first base and Coach (Shane) Stewart was telling me to keep going.”

Carson made it 2-0 with a quiet run in the third. Katelyn McGee walked, advanced to second on an illegal pitch, got to third when Jewell grounded out and scored when Kary Hales put the ball in play to the right side. The Cougars don’t strike out much, and they had quite a few productive outs.

Maci Cooper whacked a double leading off the fifth and sprinted home for a 3-0 lead when Jewell lined a single to center. Pratt made a strong throw to the plate, but the speedy Cooper slid in safely.

“Maci had a great game leading off, setting the tone for us on offense,” Duncan said.

McGee got on base again in the sixth when her sinking liner to left field fell just in front of Camryn Nooner. That two-out hit gave Jewell a chance to swing, and she crushed a two-run homer to right-center to put an exclamation point on Carson’s victory.

“Katie is a stud,” Greene said. “Great arm at shortstop and a good bat.”

Meanwhile, Stewart was rolling through West’s hitters. West’s three hits were a first-inning single that Alexandra Linder served to center, an infield hit by Allison Ennis in the sixth, and Parker Greene’s solid single, leading off the seventh.

“We kept over-swinging,” Coach Greene said. “We get down and we press and we swing too hard.”

West had two on base for the only time in the seventh, when Greene got her single and Taylor Walton patiently worked a one-out walk. Morgan Corriher hit the ball pretty well to left field, but it was caught for the second out. Then Stewart broke off the nasty screwball to Pratt, and the Cougars celebrated a championship.

“I don’t think our girls realize yet how important this win was,” Duncan said. “Last year, in the first round of the playoffs, we were driving for three or four hours. We’ll be a lot more comfortable playing at home.”