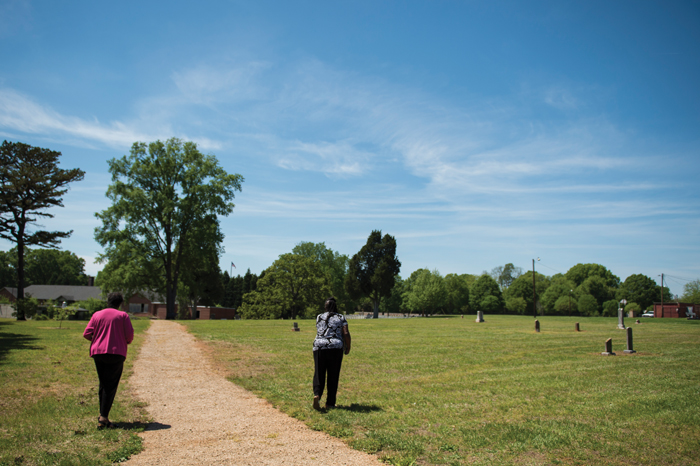 Johnnie Mae Tracey, left, and Emily Perry walk through the Dixonville Cemetery together on May 2, 2018. (Photo by Rebecca Benson)

SALISBURY — Imagine about 10 of your favorite local pastors on stage being given the chance to tell jokes and humorous stories from their days as ministers.

And if you remember Gladys Knight and the Pips, think of Salisbury Police Chief Jerry Stokes, Assistant Police Chief Shon Barnes and Fire Chief Bob Parnell singing and doing their version of the Pips.

Put these things together and you have plenty to look forward to in the upcoming show “Ministers of Comedy,” which will raise money for the Dixonville-Lincoln Memorial Project off Old Concord Road.

Promotional materials of the Dixonville-Lincoln Task Force say you’ll “laugh, cry, praise and laugh some more” during the show.

Door prizes will be given out.

Stokes, Barnes and Parnell will be part of the performing group “G and the Chiefs,” but the identity of “G” has yet to be revealed. One of the organizers, Deedee Wright, promises you will know “G” when he or she hits the stage.

Another guest performer will be singer Destiny Stone of Catawba College.

The show will be emceed by David Whisenant of WBTV.

Emily Perry is chairwoman of the Dixonville-Lincoln Memorial Task Force.

“Emily was saying we need to show our ability to raise funds,” Wright said.

And Wright thought in turn, “We had to come up with something that hasn’t been done before.”

At first, she had visions of putting on a senior prom-like event, but there were concerns the accompanying costs would be too high. Raemi Evans, Amanda Griffin and Wright ran instead with the comedic ministers idea and found local ministers highly receptive.

“It gives us the chance to educate the community (about the project), raise money and have fun,” Perry said.

Wright said it’s also a chance for the coming together of the white and black communities for a fun evening.

In the past, the task force has held a big fish fry as a fundraiser, headed by the late chairman Fred Evans. But organizers think “Ministers of Comedy” could be bigger.

The task force was formed in 2010 to create a memorial that would raise the profile of Dixonville Cemetery, interpret its history and pay respects to the African-Americans buried there, documented as far back as Mary Valentine’s 1851 gravesite.

The Dixonville-Lincoln Memorial Project has been divided into three phases. The cost of Phase 1A of the memorial’s design came in at $370,740, so that figure does not include phases 1B, 2 or 3.

Perry and her task force expect to have a groundbreaking on Phase 1A in coming weeks.

Alyssa Nelson, urban design planner for the city, reports that $251,890 worth of work will be done in the first phase, awarded to Unit Paving.

The initial construction will focus on creating a memorial walk along Old Concord Road, and the stones will be engraved with the known names of the interred.

More than 500 people buried in Dixonville Cemetery are documented thanks to research done by Betty Dan Spencer. (Likely, there were hundreds more.)

A second project phase will install a Dixonville Cemetery interpretive walk, connecting the memorial walk with stops along a perpendicular path going to a high point in the cemetery. Here, visitors will be able to gather, study and reflect on the history of the cemetery and what used to be the surrounding Dixonville community.

Lincoln School’s revitalization is much further in the future. One idea calls for a transformation of the onetime African-American elementary school into senior housing. The footbridge to Lincoln School over which children walked to school each day would be reconstructed as part of that phase.

Perry said key contributors toward the start of Phase 1 include the city of Salisbury, Robertson Family Foundation, Woodson Foundation, the Colonial Dames and private donations.

The task force has been sending letters to individuals and groups asking for contributions and also will apply for grants.

As a community, Dixonville began to fade away when Salisbury’s east-side urban renewal started in 1963 with the demolition of Shaver Street Grocery. By the end of that year, 40 buildings were down, and overall, 230 structures were demolished and replaced by public housing.

South Long Street leading into Old Concord Road was widened and realigned. After five years, 197 families and been displaced and/or separated by the wider road.

Dixonville Cemetery is city-owned and maintained. Burials started there before the Civil War and reached into the 1960s. But only a handful of grave markers remain today. Some prominent Salisburians are buried there.

They include Bishop John Jamison Moore, founder the of AME Zion Church in western North Carolina, and the Rev. Harry Cowan, who was born into slavery but went on to establish 49 churches and baptize 8,500 people.

Accompanying Qadirah to the cemetery Wednesday were Bonnie and Charles Pullen of Baltimore.

“She was telling us about it, and it sounded so interesting,” Charles Pullen said.