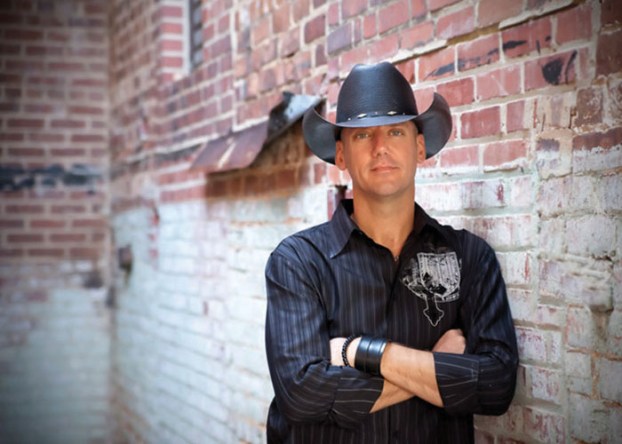 Darrell Harwood performs with the Salisbury Symphony in a groundbreaking concert on May 5.

Salisbury Symphony: Look for the guy in the black cowboy hat, Darrell Harwood

CHINA GROVE — “It’s my Superman cape, my security. Some people have a guitar to hide behind. The hat is my security. When I put it on, I come alive. It brings the magic.”

Entertainer Darrell Harwood is talking about his black cowboy hat, which he wears – well, always. When he’s performing, at least. And he’s performing with the Salisbury Symphony Orchestra on Saturday.

Harwood’s dad was a musician, and he named his own band after his dad’s. But he had other music icons to look up to – names like Garth Brooks and Alan Jackson. His father listened to George Jones and Merle Haggard. Harwood “didn’t have much choice but to listen to them, too.”

Since his first CD release in 2012, fans have been eagerly waiting for a new album. Harwood hopes to get it released later this year, “and we’ll have a big release party.”

He’s got new songs coming up for performances, too.

“Me and Daryl Eudy have worked on some new stuff,” he said. “Hopefully, we can find some time to get things down on paper. It’s hard to work a full-time job and play as much as we do and get time to write music.”

Harwood performs 150 times a year. How does he manage it all?

“That’s the biggest drawback of all. The last eight years, if you regret anything at all, it’s time away from your kids. I have two beautiful daughters. Tayler is 17 and graduates from Carson this year. Sarrah is 14. My wife, Karen, and I will celebrate our 22nd year anniversary this year. Thankfully, my family is very understanding. My daughters support me and love me, and any time I have left, they’ve got.”

He seemed surprised to hear he has a reputation for being a nice guy.

This year, he signed with Brio Live Entertainment to book more festivals and kid-friendly shows. He’s got nothing against bars, he says — they’ve been awfully good to him — but he’s ready for a change of pace.

“Kid-friendly is where my heart is. Sometimes you just want to step out and get more exposure. Meet a lot more people.”

As for playing with the symphony this weekend, Harwood says, “I’m as excited as any show I’ve ever played. They called me and asked me to do it. I’m nervous. I’ve heard the recordings of the music, and I’m blown away, excited to do this show.”

“I don’t feel like anybody’d want to miss it. It’s gonna be real good.”

He’ll be wearing the hat.

Darrell Harwood plays with the Salisbury Symphony Orchestra at 7:30 p.m. Saturday at Keppel Auditorium at Catawba College. A pop-up lounge opens at 5:30 p.m. Morgan Ridge will serve wine, beer, light snacks and sodas throughout the evening. An after-party with Harwood will follow the concert, where guests can meet the artist for photos and autographs. Admission to the after-party is $5, with all proceeds going to the Salisbury Symphony. Guests wearing Darrell Harwood-branded apparel can attend the after-party for free.

Purchase tickets to the concert at www.salisburysymphony.org or call 704-216-1513.

SALISBURY — As the candidates for Rowan County commissioner responded to questions from voters at a forum Tuesday night, a... read more