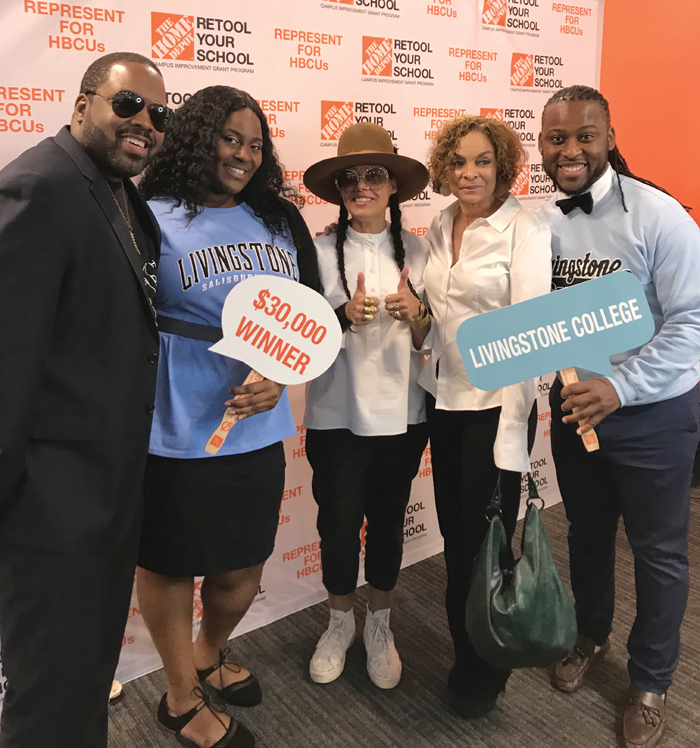 The award was presented Monday at the Home Depot Store Support Center in Atlanta.

The Retool Your School program gives historically black colleges and universities an opportunity to make upgrades to their campuses. Nine campus improvement grants totally $360,000 are awarded each year. Schools are divided into three clusters based on enrollment.

All grants are awarded based on consumer voting and project proposal scores, which are determined by a panel of judges

Livingstone College placed third in Cluster 3. The grant will be used to upgrade the outdoor student pavilion next to the cafeteria.

“These three worked together to create innovative challenges with incentives to gain the participation of the Livingstone College student body, alumni, faculty and staff, as well as the Salisbury community,” said Orlando W. Lewis, vice president of student affairs.

Brown and Evans traveled to Atlanta for the award presentation, which was made with cast members from the former hit TV sitcom “A Different World,” which centered on a fictional HBCU in Virginia.

“I’m really glad to have had the opportunity to work with Livingstone College to reach this level in the competition,” Brown said. “I’m especially thankful to (Livingstone President) Dr. Jenkins, who continued to push us to run faster, and the students who worked so hard in voting.”

There was a major push in getting votes and giving incentives to students who shared or retweeted the hashtag, #Livingstone_RYS18, the most on social media.

“On a recent flight back from New York City, I spent time voting over and over again and asked the passenger beside me to vote for us, too,” said Kimberly Harrington, assistant director of public relations for the college.

“Thanks to all faculty and staff who voted daily including weekends. Together, we accomplished a huge success and win for Livingstone College,” Lewis said. “A special thanks to Dr. Jenkins, who encouraged the Livingstone College family not to quit when we were behind. We are Blue Bears, and this is just the beginning.”

Jenkins echoed those sentiments, thanking everyone who voted in the contest. The grant will be put to good use in renovating the pavilion area, he said.

“Home Depot strives to give back to our HBCUs what they have so generously given to the communities they are a part of: a strong foundation, renewed purpose and distinctive character,” a Home Depot official said.