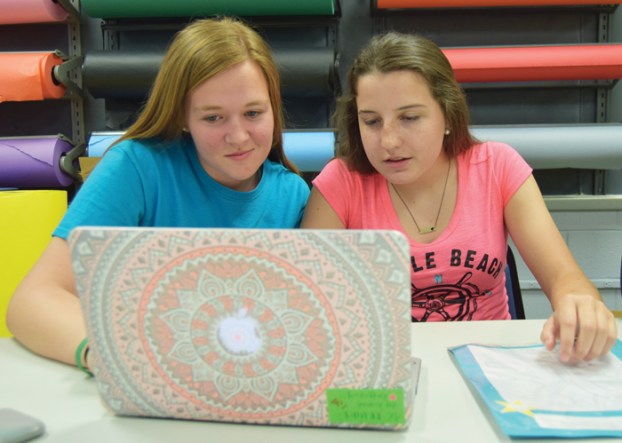 MOUNT ULLA — West Rowan High School’s courtyard is full of students on sunny days. During Power-U and free periods, students grab a bite, study or soak up the sun.

The courtyard is something that students think is unique to the school.

“Most everybody here loves being outside,” student Zeb Burns said.

That made sophomores at West Rowan believe the school is a perfect location for a solar tree. The group is working to make that idea into a reality.

The idea of a solar tree, an artistic outdoor structure fitted with solar panels and outlets to charge phones and computers, is catching on. N.C. State University recently installed one, and student Mira White said that’s where she and her classmates got the idea.

White’s English teacher, Megan Parrish, brought up N.C. State’s installation, and the class discussed the possibility of building one at West. White and other students immediately took a shine to the idea.

“We were like, why can’t West Rowan have it too?” White said.

But after that initial pitch, Parrish and other teachers let the students take the reins. White’s English class is collaborating with two others courses — a pre-calculus class and an agromechanics class — to design and build the tree.

“No teachers did this,” White said. “It was all students.”

Together, the students came up with a design, then turned the plans over to pre-calculus students to draw blueprints. When the time comes to actually build the tree, the agromechanics students will step in.

“I think we all agreed that it would work if we all worked together as a class,” student Emily Gaskey said.

Once finished, the solar tree will sport two solar panels and have room for eight USB ports and four corded outlets. Students estimate that the total cost for construction will be between $20,000 and $25,000.

Students have reached out to local businesses for deals on materials, and the outlook is positive. Duke Energy donated two solar panels — the main expense White and others were worried about.

“Our biggest chunk of money was solar panels,” White said.

The group is still waiting to hear back about prices on metal and other materials, but the students are not kicking up their heels. White said the group has filled out one grant application and plans to do others. The students also are contacting local philanthropists.

Once complete, students hope that it will further encourage West Rowan High’s students to spend more time in the great outdoors — without fear of losing power.

SALISBURY — Imagine about 10 of your favorite local pastors on stage being given the chance to tell jokes and... read more