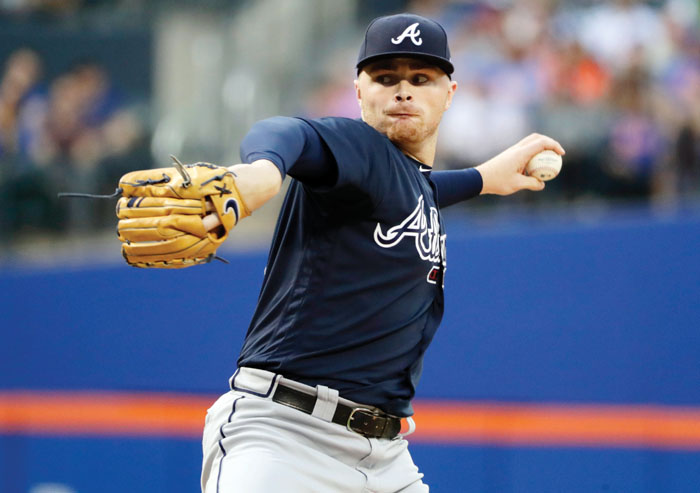 Atlanta Braves' Sean Newcomb delivers a pitch during the first inning of the team's baseball game against the New York Mets on Wednesday, May 2, 2018, in New York. (AP Photo/Frank Franklin II)

NEW YORK (AP) — Finally armed with a healthy rotation, the New York Mets rolled to the top of the NL East in April and settled concerns after a frustrating 2017.

One big swing from Jacob deGrom, a few more from the Atlanta Braves, and suddenly Queens is rife with anxiety again.

DeGrom was pulled after four dominant innings with a hyperextended right elbow, and the Braves broke out against the bullpen to back a stellar start by Sean Newcomb and beat New York 7-0 Wednesday night.

DeGrom was injured while striking out swinging in the third inning. He returned to the dugout and told manager Mickey Callaway his arm hurt, but he wanted to keep pitching. DeGrom pitched smoothly through the heart of Atlanta’s order in the fourth, but then told the staff his biceps was sore and left for the clubhouse after 46 pitches. He was replaced by Paul Sewald to begin the fifth.

The ace was sent for an MRI, and the team expects to get results Thursday. Hyperextended elbows are a rare injury for a pitcher, and Callaway said he has no idea how long deGrom could be out.

“We’re not quite sure what the deal is,” Callaway said. “We won’t have any information until tomorrow.”

Atlanta also had an injury concern when shortstop Dansby Swanson was lifted in the sixth inning with a sore left wrist. Swanson felt discomfort while hitting, and Braves manager Brian Snitker removed him as a precaution. Snitker said Swanson will sit out Thursday and then be re-evaluated.

Upstart Atlanta (18-11) overtook the Mets for the division lead behind seven innings of two-hit ball from Newcomb (2-1). The 24-year-old retired his final 14 batters, struck out eight and walked none on 97 pitches.

It was the first time in his career that Newcomb completed seven innings.

“Just throwing strike after strike,” Snitker said. “He could have just pitched all night because he was in sync. Delivery was working. That was good to see.”

Atlanta’s starters entered with a 2.67 ERA over their previous 23 games.

Sam Freeman and Peter Moylan wrapped up Atlanta’s three-hitter with an inning each.

Sewald (0-2) allowed an RBI single to Freddie Freeman in the sixth and a two-run homer to Ender Inciarte in the seventh. Newcomb lined a double off the left field wall a pitch prior to Inciarte’s shot to right.

Sewald gave up three runs in three innings, and Robert Gsellman gave up back-to-back homers to Johan Camargo and Ryan Flaherty during a four-run eighth.

Freeman and Nick Markakis each had three hits and an RBI for Atlanta. Baby Braves Ozzie Albies and Ronald Acuna Jr. both went 0 for 5.

AL East-leading Boston won for the third time in four games after losing 7-6 in 13 innings on Tuesday night.

Cheslor Cuthbert homered for Kansas City, and Drew Butera had a two-run double. Danny Duffy (0-4) was tagged for five runs and 10 hits in 6 2/3 innings.

Drew Pomeranz (1-1) worked six innings for the win and Craig Kimbrel struck out the side in the ninth for his eighth save.

Encarnacion hit a three-homer in the first, a two-run shot in the second and a solo drive in the eighth. The designated hitter leads the team with nine homers despite a .191 batting average.

Batting at the top of the lineup for the second straight game, Harper sent a first-inning pitch from Ivan Nova (2-2) into the second deck in right-center for his 10th homer this season and second in two nights.

Tyler Anderson (2-0) pitched a season-high seven innings after leaving his previous start because he was feeling light-headed. The left-hander struck out a season-high nine while permitting two runs and three hits.

Dexter Fowler added a two-run homer for the Cardinals, who won their second game in a row.

Yelich hit a tiebreaking drive to right off Luis Castillo (1-4) in the fifth.

When he was told he was going back out for the ninth inning, he made sure to close it out.

“When they told me, I was happy,” Severino said about staying in for the ninth. “I was feeling good. My fastball was there. Changeup, slider, I was feeling very good.”

Stanton hit a two-run homer to right field that just made it over the wall in the first inning. He added a solo homer to left off Yankees nemesis Dallas Keuchel (1-5) in the fourth and tacked on an RBI double in the eighth.

The first home run by Stanton was the first Keuchel had ever allowed to the Yankees, who have won 11 of their last 12 games.

“I got good pitches to hit, was on time, got the barrel on them,” Stanton said. “(Severino) put us in the best situation possible.”

“It means a lot,” he said of the complete game. “This is a great team. This is a great fastball-hitting team. What me and (catcher Austin) Romine did to go through nine innings, that’s very special.”

Severino was still throwing 99 mph in the ninth as he polished off New York’s third complete game over the last three seasons. The 24-year-old righty became the youngest Yankees pitcher to toss a shutout since Sterling Hitchcock, who was also 24, in 1995.

“He never really got out of whack,” New York manager Aaron Boone said. “He was dominating three pitches. He mixed in his changeup a bunch tonight. I felt like for most of the night he was on cruise control. Special outing.”

New York has taken two of three in a four-game series, the first matchup between the teams since Houston won Game 7 of last year’s AL Championship Series. The Yankees have thrown consecutive shutouts for the first time since May 2014 against the New York Mets.

The last time Houston got blanked two games in a row was early July 2013, by Tampa Bay.

“Tonight was about Severino, obviously,” Houston manager A.J. Hinch said. “He completely dominated the night. We didn’t have an answer for him.”

Severino retired 14 of his first 15 batters, with the lone hit being Alex Bregman’s single through the right side in the second.

Keuchel allowed three runs and six hits with five strikeouts in seven innings. The left-hander pitched better after giving up six runs over seven innings in his last outing, but home runs continue to hurt him. He’s served up eight in seven starts this year and at least one in each of his last four outings.

“He made some adjustments from the first two games,” Keuchel said about Stanton’s homers. “A bunch of their big boys were selling out the other way early. I made the necessary adjustments, but when Severino has it going on like he was tonight, it’s going to be tough sledding for our offense.”

Yankees: LHP Jordan Montgomery was placed on the 10-day disabled list with a flexor strain. Montgomery won’t throw for three weeks and could miss six to eight weeks, Boone said. … RHP David Hale was recalled from Triple-A Scranton/Wilkes-Barre to take Montgomery’s spot on the roster. … OF Jacoby Ellsbury (right oblique strain) was transferred to the 60-day DL. … OF Clint Frazier was reinstated from the 7-day concussion disabled list and optioned to Scranton/Wilkes-Barre. … RHP Luis Cessa (left oblique strain) is at least a week or two away from playing catch, Boone said. … RHP Tommy Kahnle (right shoulder) has been playing catch for the last couple of days. … RHP Adam Warren (back) is close to playing catch “any day now,” Boone said.

Astros closer Ken Giles punched himself in the face while heading to the dugout after giving up a three-run homer to Gary Sanchez in the ninth inning Tuesday. Hinch said it’s a tough look for someone coming out of competition like that. “I understand the frustration,” he explained. “I understand how much these guys put into it, but in an ideal world, you can handle it a little more calmly and without the violence.”

Yankees: RHP Masahiro Tanaka (4-2) makes his seventh start of the season Thursday, looking for a third straight win. Tanaka is 0-2 with a 10.38 ERA in four games against the Astros.

Astros: RHP Lance McCullers Jr. (4-1) goes for his fourth consecutive win in the series finale. McCullers has allowed one run or zero in each of his last three starts.