Bob Baffert back at Derby with another favorite 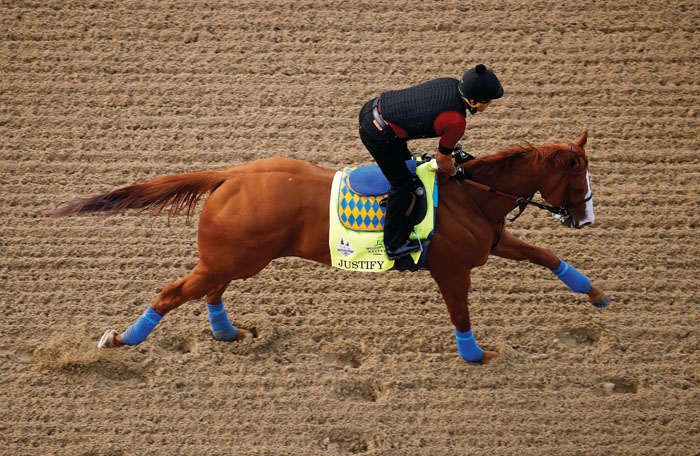 Kentucky Derby entrant Justify runs during a morning workout at Churchill Downs Wednesday, May 2, 2018, in Louisville, Ky. The 144th running of the Kentucky Derby is scheduled for Saturday, May 5. (AP Photo/Charlie Riedel)

LOUISVILLE, Ky. (AP) — Bob Baffert is back at the Kentucky Derby with early favorite Justify after watching the race from his sofa in Southern California last year.

The Hall of Fame trainer’s ability to produce Derby contenders year after year is an enviable feat and why his absence a year ago stood out. It was just his second since 2009 and occurred because his lone candidate got hurt.

Baffert will saddle Justify and 30-1 shot Solomini in Saturday’s Derby.

Justify is one of the greenest colts Baffert has brought to Churchill Downs. He’s won all three of his starts by a combined 19 lengths. If Justify wins, he’d be the first to do so since Apollo in 1882 without racing as a 2-year-old.

“The thing about the Kentucky Derby, you have to have the right horse. It just happens. You can’t force it,” Baffert said. “All of a sudden, you have good horses and you’re there. So I’ve been really fortunate to have some really good horses.”

Baffert’s four victories are tied for second-most in Derby history. He’s finished second three times, too, including in 2012 with Bodemeister, also the last time he had two starters in the same year.

Like Justify, Bodemeister didn’t race as a 2-year-old. He set a blistering pace and led the Derby until the final 150 yards when I’ll Have Another overtook him to win by 1 ½ lengths.

Magnum Moon, the 6-1 third choice, also is unbeaten and didn’t run as a 2-year-old.

“It’s going to happen,” Baffert said, referring to the curse being broken. “Whether it happens this year or whatever, but it will happen because Bodemeister almost got away with it. But I don’t really worry about that.”

Baffert almost had a third starter this year until McKinzie developed a hind end issue that knocked him off the Derby trail.

“When McKinzie got hurt, I wanted to throw up,” he said. “I really think McKinzie would probably be second choice here. We’d really have a 1-2 here.”

Justify cleared the biggest pre-Derby hurdle by drawing the No. 7 post. Jockey Mike Smith can use the colt’s early speed to position him well for the long run to the chaotic first turn. Solomini ended up in the No. 17 post; no horse has ever won from there.

Baffert turned 65 in January, making him eligible for Medicare and retirement at most other jobs. However, he entertains no such thoughts.

“I work hard at it. I just don’t give up,” the white-haired trainer said. “I’m constantly meeting people. They’re sending me horses. If you don’t have success, you’re not going to get those opportunities.”

After a successful run in the quarterhorse ranks, Baffert switched to thoroughbreds. He started with one horse.

“After 25 years, I’m finally getting horses that I don’t have to buy,” he said. “The big guys are sending me horses.”

None was bigger than American Pharoah in 2015. The colt swept the Derby, Preakness and Belmont to become racing’s first Triple Crown winner in 37 years.

Baffert has compared Justify to American Pharoah, citing the colt’s imposing physical presence and big stride. Still, Justify has yet to encounter the kind of traffic the Derby’s 20-horse stampede creates and the talent as he’ll run against on Saturday.

“I’d rather have a really talented horse than one who’s seasoned and just on par with the rest of them,” Baffert said.

Early on, Baffert knew Justify had the goods.

“The first time I worked him at Santa Anita, I knew he was a really good horse,” he said. “The track was really deep that morning, and he went around there effortlessly. His first race, he ran incredibly and showed how special he was.”

That kind of intuition is what separates Baffert from his rivals, fellow Hall of Famer trainer D. Wayne Lukas said.

Prep Track: East boys back on top in NPC