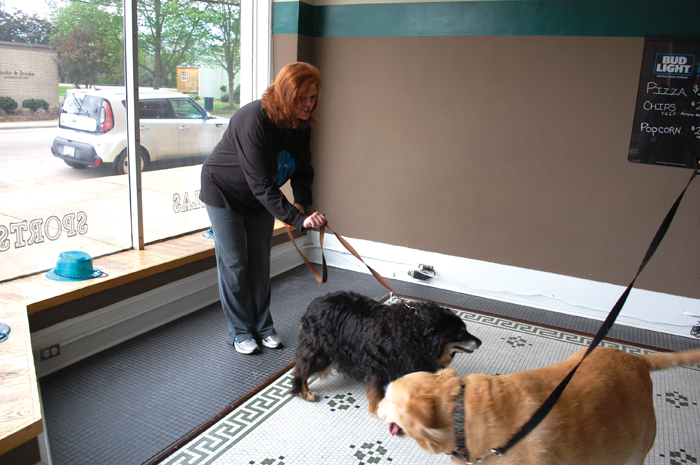 CHINA GROVE — Theresa Stout has lived in China Grove for 30 years. For eight of them, she’s had her dog, Annabelle Grace, by her side.

Stout said she and Annabelle Grace — affectionately known as “Annie” — walk in downtown China Grove every day after she returns from work at the Hefner VA Medical Center.

“There’s usually nowhere to stop, so this is cool,” Stout said from inside Bella’s Ales and Tails. “We can stop here.”

Stout and Annie were at Bella’s Ales and Tails — formerly called Bella’s Bark and Brew — for its first day open last Thursday.

“We were really excited because there’s not a lot to do in China Grove. So this is exciting,” Stout said. “Isn’t it, Annabelle?”

Annie’s head was resting in Stout’s lap when Ales and Tails server Collin Wilson came to ask Stout if she’d like another glass of wine.

Wilson said that, as a server, he loves having dogs around.

Wilson is the son of Ales and Tails owner Jean Helms. He said growing up with Helms made him a fan of dogs.

“I have to love dogs because, I mean, just with who my mother is. We’ve got three dogs at the house,” Wilson said. “So, yeah, I’ve got to love them,”

Server Suzy Williams has two dogs and lives minutes away from the bar, which is at 102 S. Main St. where Dixie’s Roasting Co. used to be.

“So if I’m not working, I know that I can come here with my dogs and hang out with everybody,” Williams said. “Usually I’m traveling to Charlotte to go to another dog bar or Cabarrus Brewing or something like that. So to have this right here at home is really awesome.”

Helms said that at the soft opening Ales and Tails hosted during the April 21 Cruisin’ the Grove, about 85 customers and at least 20 dogs showed up.

“I just hope to see more people out every time we’re open. And what I really want people to know is yes, it’s a bar, but it’s also family-friendly,” Helms said. “We’ve got a bunch of board games and Jenga and things like that. And we had families coming in on Saturday and taking advantage of that.”

Helms said the bar does not serve food but allows people to bring food in from elsewhere.

“Ari’s is working with us and delivering right to here. If you want to get pizza or wings, you can get that right to you,” Helms said.

Helms said all dogs are required to be on leashes when they are in the bar.

“Then if we get into a situation where they’re acting rowdy, we’ll ask them to take them outside and go for a walk up and down the street, get some of that energy off,” Helms said. “If they come back in and the dog is still rowdy and barking and people can’t think or enjoy their time here, then we’d have to ask them to go. I hope that doesn’t happen often.”

Helms also owns Bella’s Barkery in downtown Salisbury and will have treats from the Barkery available for purchase at the bar.

Bella’s Ales and Tails is open from 5 to 11 p.m.Thursday through Saturday and 3 to 7 p.m. Sunday.

On Sundays, bluegrass jam sessions will be featured from 4 to 6 p.m. Helms said all ages are welcome.

The bar’s ribbon-cutting will be held at 4:30 p.m. Friday. Hot dogs and bratwursts will be sold, and musician Kameron Marlowe will perform.

Helms runs the bar with her husband, Chris Helms.