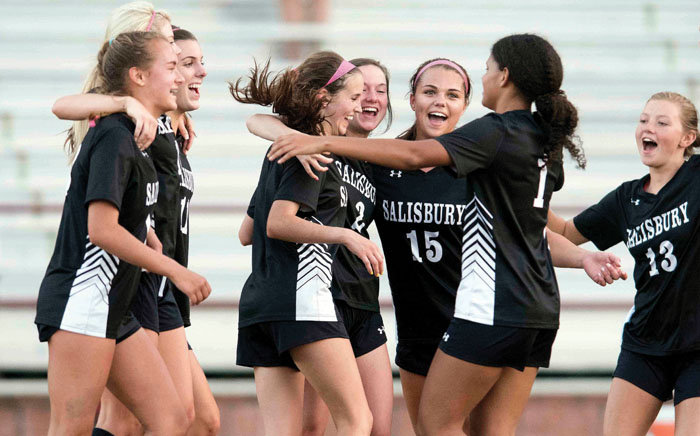 LANDIS — There was a lot on the line for Salisbury’s record-setting girls soccer team Wednesday night.

At stake was an unblemished season, a shot at the county record for wins in a season and a No. 1 seed through the first five rounds of the upcoming 2A state playoffs.

“A lot of nerves out there today,” said senior goalkeeper Emily Mann. “We played our game and tried to relax.”

That was a tall order for the Hornets, who survived a 2-1 test-of-nerves in their Central Carolina Conference finale at South Rowan. They checked every box on their to-do list despite playing without highly decorated midfielder Julia Honeycutt, who was officially “under the weather,” according to head coach Matt Parrish.

“She’s all-state for a reason,” Parrish said, moments after Salisbury (21-0, 18-0 CCC) surpassed West Rowan’s mark of 20 victories set in 2012. “There was a significant portion of Monday’s match against North Davidson that we played without her in anticipation of this possibility. That put our rotation on a different leash, so to speak.”

Salisbury without Honeycutt is like Metallica without Lars, Kirk and James. But the Hornets received above-and-beyond performances from sophomores Anna Grace Woolly, Elle Kennedy and freshman Caroline Cardelle, who netted the winning goal with 10:28 to play.

“No one on our team stopped fighting,” Cardelle said. “We learned that from Julia. She’s never let us down.”

“They didn’t do anything special to defend her,” Neal said. “But they defended well as a team. We weren’t able to get service to Madison like we had hoped — and that made a difference.”

Henry nonetheless made her presence felt following a scoreless first half. She drove the left side and rifled a shot that hissed past Mann but crashed off the crossbar just five minutes into the second half. Then with just less than 16 minutes remaining and the score tied 1-1, the sophomore pummeled a 25-yard free kick from the left side but missed the frame wide-right.

“I just let her dribble and counted on my teammates to help,” said Kennedy, charged with marking Henry throughout much of the match. “But that crossbar shot, that was nerve-wracking.”

Henry practically forced Salisbury played China Wall defense in the second half, particularly after South (15-6, 13-4) opened the scoring in the 48th minute. Credit the yeoman’s work of defenders Bethanie Stauffer, Lilly Rusher, Olivia Dagenhart, Kennedy and midfielder Piper Muire. They were at their disruptive best following Rhiannon Kimmer’s goal at 7:47 of the second half.

“In the first half, we possessed the ball really well, but weren’t creating chances,” Kimmer said after settling a feed from Henry and side-footing a five-yard shot past Mann’s left side. “We had some unlucky moments. But on the goal, the pass got tangled up in my feet. I somehow got control over the ball and just tapped it in.”

The Raiders — 4-1 losers at Salisbury on March 26 — started thinking upset almost immediately. “If you saw Rhiannon’s reaction,” Neal said, “and saw what it did to our bench and the crowd in the stands, you had to believe we could win.”

Instead, South’s lead stood for all of two minutes and 44 seconds. Salisbury answered when the Raiders were busted for a hand ball in the box and a penalty kick was awarded. With Honeycutt laced into her sneakers, Parrish chose Woolly to face South keeper Michelle Rivera.

“Every time this team has been down, we have gotten better at responding faster,” he said. “That’s an old Coach Sexton-ism. The next five minutes after a goal is scored are the most important five minutes of any game.”

Woolly tied the score with 29:29 to go when she drilled a low shot to Rivera’s left. The keeper guessed correctly, dove and deflected the ball into air before it fluttered over the goal line.

“Michelle made a good read,” Neal said. “She got a piece of it, but the ball was just hit too strong.”

The winning goal came with the clock melting and Honeycutt pleading with Parrish for playing time. On a play that looked like it had been drawn up in the dirt, Cardelle jumped on a loose ball in front and lifted a close-range shot past Rivera, who was screened on the attempt.

“It hit off something or someone somewhere,” Cardelle tried to explain. “It was confusion. There was so much traffic right there in the box and I just hit it.”

Whatever it was, it set off a Salisbury celebration that was more relief than joy. Steadfast defense in the waning moments secured the victory and a deserving prize — state playoff games at home for the foreseeable future.

“Somehow, we did it,” Parrish said. “This game could have been different in many regards. We were fortunate tonight.”