Prep Track: East boys back on top in NPC 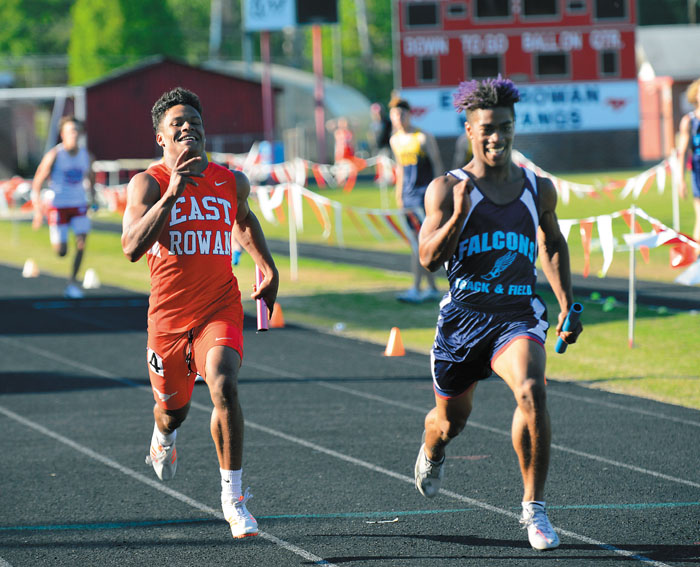 Wayne Hinshaw/for the Salisbury Post ... West Rowan’s Jalen Houston and East Rowan’s Sam Wall seem to be enjoying their dash to the finish line in the 4x100 relay. West Rowan won the event as Houston beat Wall to the stripe.

GRANITE QUARRY — The two-day North Piedmont Conference Track and Field Championships was decided by the final event on Wednesday and ended with multiple and sloppy Gatorade baths for East Rowan coaches.

East’s boys had finished fifth and sixth in South Piedmont Conference meets the last two seasons, but they found a new league to their liking. East’s seniors earned their second conference title. They won the SPC in 2015 when they were freshmen.

“This was a tough meet,” East sprinter Jacob Downing said. “The danger all day was in trying to go out too fast. We needed to pace ourselves. We had to have something left at the end.”

The 4×400 relay is the traditional conclusion for track meets, a fierce event that supplies the perfect combination of speed, endurance and teamwork. Four young people making careful baton exchanges under pressure while blasting an all-out mile sprint with the crowd screaming.

East went into that 4×400 with a precarious, five-point lead over South Iredell, and South Iredell was the favorite to win the event.

“We couldn’t finish lower than third,” said Downing, who placed individually in the 100, 200 and 400. “We knew where we stood. Anything lower than third and we lose the championship.”

Downing, East’s best 400 guy, got it started, and Cooper Wright, Ross Alexander and Chase Whitley followed him home. Wright, a sophomore, and Alexander, a senior, ran the 400 splits of their lives. Whitley, a senior, arms raised to the heavens, crossed the finish line right behind South Iredell, his last act on East’s track a moment of triumph.

In a meet that close, there are a lot places where East won it. On the far end of the track, East junior Christian Bennett, MVP for field events, added a surprising discus victory to the shot put title he achieved on Tuesday. No one had a great day throwing the discus. Carson’s Joseph Collins, who placed fourth, was 20 feet short of his winning effort in the Rowan County Championships.

“Christian threw 117 feet (and 6 inches), and that’s not normally going to win the discus in a conference meet,” East head coach John Fitz said. “But he threw it further than anyone else, and those were some big points.”

The versatile Bennett was more excited about his role on East’s second-place 4×100 unit. East appeared to have that race won, but West Rowan’s Jalen Houston summoned a phenomenal burst at the end.

“I had some pretty good throws in the discus today, just feeling it a little bit and powering through,” Bennett said. “I also wanted to do my part in the 4×100. That was a good race, good for the fans. We didn’t win it, so it wasn’t a perfect day, but we did enough.”

Fitz had played the meet out on paper as he always does. He knew South Iredell would present the serious obstacle. South Iredell had edged East twice during the regular season, once by four points and once by five.

“South Iredell has special athletes, the kind of kids that if you’ve got five like that, you can win the state,” Fitz said. “But we can’t win that way. We have to win with our depth. We try to put three guys in every event, and we go from there. Our guys did a great job today. They fought for every point.”

Incardona, who had helped East take the 4×800 on Tuesday, has enjoyed a great career in track and cross country. This was the senior’s final race on the East track.

“I think everyone was fatigued and stiff by the time we got to the 800,” Incardona said. “I was running behind a couple of guys for a while, but then with about 400 meters to go, I just took off. It was crazy, it was ‘Jesus, take the wheel’ time. I just ran as hard as I could.”

Sam Wall won the triple jump for the Mustangs, taking the event by 16 inches over West Rowan’s Jakari Gardner, the county champion. Wall had a monster day, second in the 200, third in the 100, plus the anchor on the second-place 4×100 unit.  That’s the race where West Rowan’s Houston, who followed Joojo Brush, Gardner and DJ Robinson, snatched victory from the Mustangs.

Houston and Wall were trading good-natured barbs and smiles as they approached the finish line.

“We’re close friends and we were having a good time,” Houston said.

Houston, who led West to fourth place, sported purple hair, a fashion choice he cheerfully explained was for the “Purple Reign” he had planned.

“Purple makes you stand out in the crowd a little bit,” Houston said.

“I was happiest with the 100 because I got off to a great start,” Houston said. “I  got a little off-balance in the hurdles race and it was going to take a perfect race to win that one.”

South Iredell’s Cory Gaither Jr. was MVP for sprints. He won both hurdling events. South Iredell’s Jake Richardson edged Wall for the 200 title and teamed with Gaither as the Vikings won the 4×200.

John Menscer was the standout for third-place North Iredell. He won the long jump on Tuesday. On Wednesday, he was second to teammate Nathan McDaniels in the 400 and second to Houston in the 100. North Iredell’s Daniel Nicholson and Garrett Gibson went 1-2 in the pole vault.

Christian Turner’s second-place finish  in the 300 hurdles was another highlight for the Cougars. He was seeded sixth.

“I’m feeling surprise and happiness,” Turner said. “I was running in Lane 6, and that’s not usually a good one to run in, but I got off to a good start, and I kept kicking it. That last hurdle is always fun because you never know whether to go over it or run through it. I felt a guy right behind me, so I ran right through it.”

Carson’s Jacob Higgins, county champ in the 800, finished third in NPC behind Incardona and Mouat. Cole Perry had a second place on Tuesday in the high jump.

But it was East’s day.

“County champs and now conference champs,” said East distance coach Rick Roseman. “That’s the way you want to go out. Our seniors leave this track with their heads held high.”