Curry has 28 in return, Warriors take 2-0 lead over Pelicans 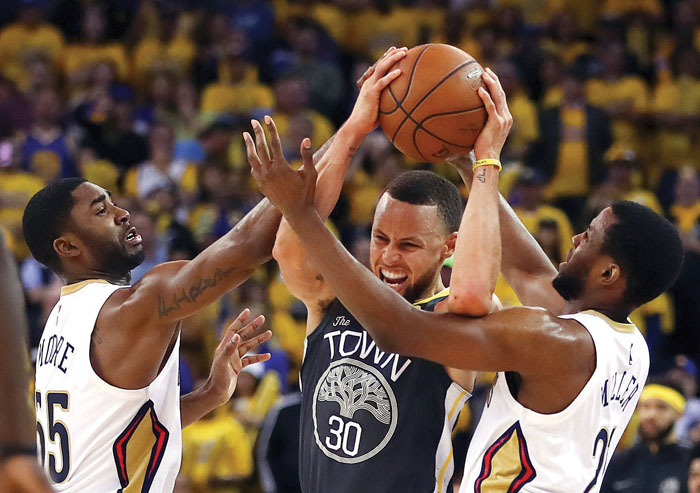 By The Associated Press
OAKLAND, Calif. (AP) — Stephen Curry came off the bench to score 28 points in a triumphant return from a knee injury and nearly six weeks off, and the Golden State Warriors held off Anthony Davis and the pesky New Orleans Pelicans for a 121-116 win Tuesday night to go ahead 2-0 in the Western Conference semifinals.
Kevin Durant scored 29 points with a huge 3-pointer with 3:10 to play, to go with seven assists and six rebounds in Golden State’s franchise-record 14th consecutive postseason victory at Oracle Arena. Draymond Green contributed 20 points, 12 assists and nine rebounds while battling Davis on both ends all night.
Davis finished with 25 points and 15 rebounds, and Jrue Holiday had 24 points, eight rebounds and eight assists for the Pelicans, who also got 22 points and 12 assists from Rajon Rondo.
Andre Iguodala converted a snazzy three-point play with 6:41 left when he flipped the ball up and it came back down and through the net as he was fouled by Rondo, then Golden State pulled away.
The best-of-seven series resumes with Game 3 on Friday at New Orleans.