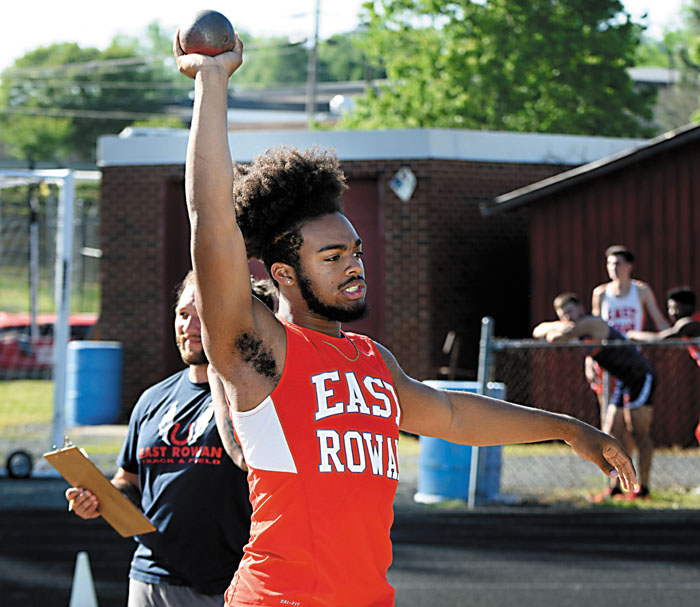 Wayne HInshaw/for the Salisbury Post ... East Rowan’s Christian Bennett gets ready in the shot put. Bennett won with a throw of 42 feet, 6 inches.

GRANITE QUARRY  —  The North Piedmont Conference Track and Field Championships are a two-day affair. Nothing was resolved on the boys side on Tuesday except that it’s going to be tight meet today and that the East Rowan boys have a good chance.

“We’re coming off winning the Rowan County meet last week,” East shot putter Christian Bennett said. “That means a lot of momentum for us in this conference meet.”

Only five boys events — shot put, high jump, long jump, 3200 and 4×800 — were completed on Tuesday. Heats and preliminaries were conducted in many events, setting the stage for the finals. Today’s docket also includes three boys field events — pole vault, triple jump and discus — that will start from scratch.

“So far, so good, but this looks like it will be a very close meet,” East head coach John Fitz said. “This is a new league for us, with new Iredell opponents and we didn’t really know what to expect. We hadn’t seen North Iredell all season until today.”

While there will be plenty of competition today, Tuesday’s 4×800 race will be hard to top.  East’s distance guys, including three battle-tested seniors who have trained for years on coach Rick Roseman’s cross country units, got it done in an epic struggle with North Iredell.

“He’s had some back soreness and tightness,” Roseman said. “Adam ran on heart today. He gutted it out for  us.”

Curly-haired veteran Ross Alexander, an unsung runner for the Mustangs, but someone who has played a role in a lot of championships, took the baton next, but it appeared North Iredell was pulling away.

“I just tried to hold the fort,” Alexander said. “I wanted to keep our deficit where it was. Chase (Whitley) and Sean (Incardona) are our two fastest. I just wanted to give them a chance to pull the race out.”

When Chase Whitley took the baton, he was staring at a lot of  track between him and North Iredell’s third-legger.

“Thirty meters behind, I don’t know, maybe it was 40 meters,” Whitley said. “It was a lot to make up. I just ran all-out, everything I had. I was going to run as hard as I could for as long as I could.”

Whitley, who unofficially ran a 2:06 leg, gnawed away at that daunting gap meter after meter, and when East’s distance standout, anchor man Incardona, seized the baton from Whitley, East was only a few meters behind. Incardona’s flying feet took care of the rest. He ran a 2:02 leg, unofficially. East won in 8:41.47 and might qualify for the regional. North Iredell clocked 8:44.74. West Rowan’s unit of Matthew Ramsay, Mauricio Sandoval, Luke Hager and Thomas Waldo, was third in 8:58.57.

“It was a similar race to the race in the county meet where we got behind but then caught up to West Rowan,” Incardona said. “This felt really good to win. Not so much for myself, but because I wanted it for those other three guys who busted it, who gave everything, and gave us a chance. The 4×800 is never a selfish race.”

Incardona said it’s the first time his group has been able to win the event in the county and conference in the same year.

While East’s distance people got the day started with a bang, they also had success in the concluding event, the 3200.

“When you go into a meet like this, you emphasize trying to finish a spot better than where you’re seeded,” Fitz said. “Ross Alexander finished two spots better than his seed. He was seeded eight, but he finished sixth. So not only does he score a big point for us, he takes a point away from South Iredell and their kid  that finished seventh. In a meet like this, every point is going to matter, and we know Roseman’s distance guys will compete for every point.”

There were a lot of powerful football bodies involved. East’s Bennett, a junior linebacker, gave away a lot of pounds to the linemen and nose guards gathered around him, but he won comfortably with an effort of 42 feet, 6 inches on his fourth throw.

“I didn’t throw nearly as far I did in the county meet, but it’s still a win and winning is what it’s all about,” Bennett said. “I always aim high every meet, and it was a lot of fun competing today with warm weather and sunshine. We didn’t have a lot of that this spring.”

Fitz, East’s football coach, believes Bennett, a leader on the Mustangs’ football team, can pursue his gridiron dreams at the Division I level.

“He’s a very explosive athlete, and schools have been in to see him,” Fitz said. “You can see his explosion and power in the shot put. He’s only been shot-putting seriously for two years and he’s winning championships.”

Statesville’s Detrich Davis cleared 5-10 to win the high jump. A surprise in that event was a second-place showing by Carson’s Cole Perry, the basketball standout. Perry cleared 5-8 and had fewer misses than North Iredell’s Stanley White. Isaac Hinceman, a freshman, took fourth for East. DJ Robinson placed fifth for West.

The Iredell teams have impressive athletes. Statesville’s Detrich, a freshman, not only won the high jump, he placed fourth in the shot put, an unusual combination.  South Iredell has distance phenom Mouat and a breath-taking hurdler in Cory Gaither Jr., who is going to battle West star Jalen Houston today.

In the prelims, West sprinter/hurdler Houston looked great. East should get lots of points today from sprinter Jacob Downing and sprinter/jumper Sam Wall. Carson will count on county discus champ Joseph Collins and Jacob Higgins, the county king in the 800.