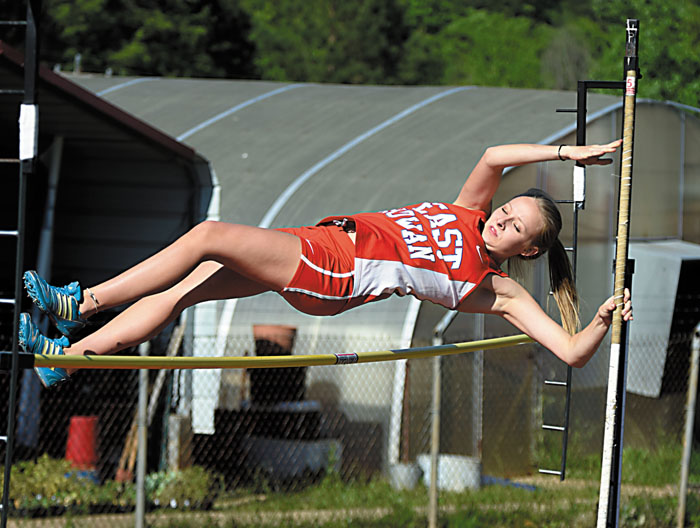 GRANITE QUARRY — Let the record show that East Rowan’s Iyahnna Neal was not at her best Tuesday afternoon.

The junior discus thrower was simply better than everyone else in the North Piedmont Conference track & field championships held at East.

“I could have done better, but this was a good day,” Neal said, moments after her throw of 99 feet and two inches bested a field of 15. “I’ve been working on my technique. The coaches told me to get low — and that’s what’s gotten me to 100 (feet) a few times.”

Neal missed the century mark, but edged runnerup Nancy Gamewell of Carson (95-5) and East teammate Madison Lovingood (86-0) to win easily. The winning throw came on the second of her six attempts.

“I got it on my second throw,” Neal said. “That meant I could relax a little and just focus on making good throws the rest of the way. I had the distance. When I let it go, I could feel the energy going through my arm. It felt powerful.”

Neal’s effort helped the Mustangs total 33 team points and take the first-day lead in the two-day extravaganza. North Iredell (32), South Iredell (32) and Carson (32) are locked in a tie for second place after five events. Finals in the other 13 are scheduled today. East senior Victoria Trexler cleared 7-6 to win the pole vault and Carson’s 4 x 800-meter relay team placed first in 11:13.28.

“She had a great shot at winning today because she was supposed to win today,” Wyrick said, after Neal qualified for her second regional meet May 11 at Greensboro Dudley High School. “But Iyahnna came out, got into first place and made everybody chase her. She’s on the radar. If she throws a 99 on an off day, she can throw 118 if she just lets it go.”

Gamewell, also a junior, placed third in the county meet with a 96-9. She comes from a discus-throwing family, following the footsteps of her mother, Lu Gamewell, and cousin Joclyn Parnell. “That makes it feel even better,” she said. “It’s in my background and it’s something that I’m good at, something other people don’t get to do.”

Nobody’s done it better than Neal this past week. “So many people have come up to me and said, ‘I saw your name in the paper,'” she said with a broad grin. “I said, ‘I know. My mom told me.’ I’ve really felt kind of special. People are even asking me to teach them the discus.”

Especially when you factor in her inexperience in the event. She vaulted once as a freshman and skipped it as a sophomore. She returned last year with a stern approach before blossoming this spring.

“It’s something I enjoy — a lot,” Trexler emphasized. “It’s not like any other event. You have control over everything you do. And you get to free fall at the end.”

Trexler took a shot at clearing 8 feet on her last vault, but narrowly missed. “I cleared, but my shoulder blades hit the bar on the way down. I didn’t turn fast enough.”

Wyrick said Trexler — a cheerleader and prom queen headed to N.C. State in August — has been a perfect fit for the Mustangs.

“She came out here and did pole vault for us because we didn’t have anybody,” the coach said. “She has embraced it like none other and really worked hard. She’ll do anything I ask her to do — and do it with a positive attitude. I hate that she’s a senior because she’d only improve and improve.”

Carson’s winning relay team was comprised of underclassmen Taylor Conrad and Lani Isley along with seniors Olivia Gabriel and Taylor Wiggins. It edged runner-up South Iredell (12:06.08) by a must-be-a-misprint 53 seconds.

“Those four are really close friends from cross country,” said Carson assistant coach Les-Lee Ihme. “This was their last meet together.”

The tandem didn’t qualify for the regionals based on time, but might on placement.

Gadson, a sprinter who qualified for today’s 200-meter dash finals, won the county title Friday with a jump of 15-10. “I did better today because the competition was better,” she said. “It pushed me to go harder and I went farther.”

South Iredell’s ShaKayla Robertson, a Catawba commit, won with a jump of 17-10. “I hadn’t competed against her until today,” Gadson said. “I missed our dual meet with them because of basketball. But I think it’s her speed getting to the line that makes her so good.”

“The long jump really isn’t her thing,” said Carson coach Ashleigh Kirkpatrick. “She hasn’t practiced at all this year. Her thing is sprinting. She has the speed, she has the legs, but basketball is her true love.”

Wiggins finished a distant third behind Statesville’s Maddie Simmons (13:16.75) and North Iredell sophomore Jonna Strange (11:14.45), who turned the race into Secretariat’s Belmont. She lapped the entire field and passed the last-place finisher twice.

“She was amazing during cross country,” said Wiggins. “I didn’t expect anything less.”

Strange wasted little time imposing her will on the rest of the field. “I always go hard at the start so I don’t get boxed in,” she said. “I like to get out in front and stay there.”

Wiggins finished nine seconds slower than she did in a second-place showing in the county meet. “I still did better than I thought,” she said. “I don’t care if I get boxed in. I can always get out of that. But in the two-mile, you always want to be making progress. And in big meets like this, it’s all about points and winning as a team.”