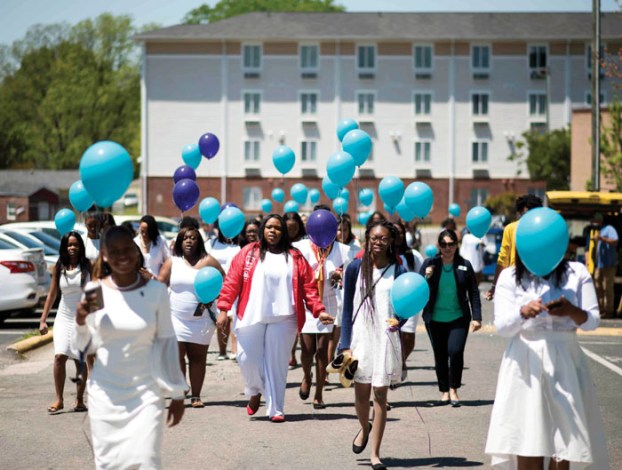 Livingstone College's four sororities gathered together for an on campus stand in support of survivors of sexual assault. Members of the sororities walked across campus and gathered at the large Blue Bear statue on the front lawn and released balloons. Jon C. Lakey/Salisbury Post

SALISBURY — On the last day of April, the women of Livingstone College gathered together to stand in solidarity with those who often suffer in silence.

As part of a service project, all four Livingstone sororities showed their support for survivors of sexual assault at the annual First Lady’s Sorority Luncheon on Monday and by marching up to the Blue Bear statue on campus. Livingstone partnered with the Family Crisis Council, Rowan County’s domestic violence shelter, for the gathering.

Spencer Dixon, resource and media coordinator for the council, said three sexual assaults have been reported on Livingstone’s campus during the 2017-18 academic year.

Sexual assault is the most underreported violent crime, yet more than 23 percent of women will be victims. College women are twice as likely to be sexually assaulted on campus than they are to be robbed. Roughly 5 percent of men also are victims of sexual assault.

“So really, we’re here to stand together to let women — and men — know that they don’t stand alone,” Dixon said.

Livingstone students said they found the statistics shocking — particularly the knowledge that there were assaults on their own campus.

“It’s hitting home for us,” said Brandi Gourdine, a senior and the current Miss Livingstone.

After the luncheon, about 60 Livingstone students from all four sororities grabbed teal and purple balloons and walked across campus, white dresses glowing in the sun.

For Tameka Brown, adviser to the Beta Kappa chapter of Delta Sigma Theta sorority, visibility was key. The walk was a way of broadcasting to the campus that “we’re here,” she said.

If survivors knew that they were not alone — that there are people they can go to when the unimaginable happens — that can go a long way toward healing, Brown said.

“It’s important for women to uplift each other,” Kinsey said. “Because if you can’t go to someone you share so much with, where can you go?”

The annual luncheon is also a time for the sororities to stand with each other in unity. Natalie Currie, graduation adviser for Zeta Phi Beta sorority, said people often think sororities are at each other’s throats. But at Livingstone, that couldn’t be further from the truth, she said. All the organizations were founded on ideas of “service and sisterhood.”

“Even though we all have different colors and different organizations, we all stand for the same things,” she said.

Keyleah Davis, a member of Alpha Kappa Alpha, said it helps people understand more of what sororities were about — helping their communities.

“A lot of people don’t expect for us to do that,” Davis said. “It’s a good start. You’ve got to start somewhere.”

For more information about the Family Crisis Council, visit http://fccrowan.org. If you or someone you know is in a domestic violence situation, call the council’s 24-hour hotline at 704-636-4718, Ext. 1.

‘All we can do is the best we can’: Morgan devotes herself to Yorkie rescue

GRANITE QUARRY — As you might expect, the yipping and yapping begin immediately on your arrival at Judy Morgan’s house.... read more