Head in the clouds: Phillip MacNutt one of few hot air balloon builders in the world 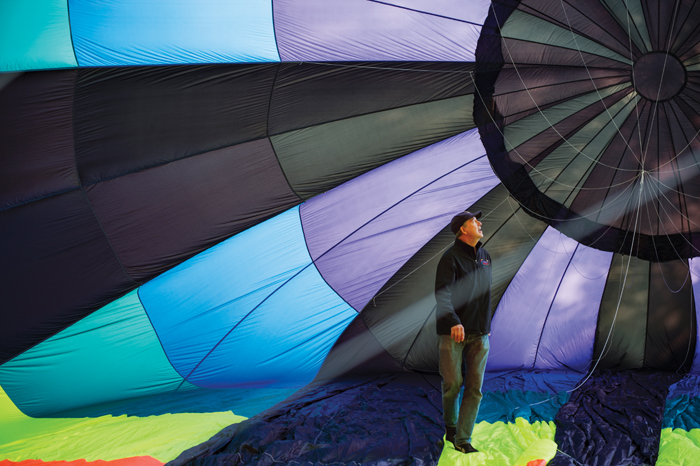 Phillip MacNutt walks inside of the balloon on April 28, 2018. Rebecca Benson/Salisbury Post

SALISBURY — Phillip MacNutt can’t seem to get away from hot air balloons.

“I’ve tried to quit a couple of times, and I always come back,” MacNutt said.

MacNutt, who moved to Salisbury about three years ago for an engineering job at Integro Technologies, is one of only a few dozen amateur hot air balloon builders in the world.

“It’s not terribly difficult to do at all,” MacNutt said. “It’s just a lot of tedious work. And I’d never sewn anything before I built my first one.”

MacNutt said he got involved in with hot air balloons when he was in his early 20s.

“I went to this little balloon event in my hometown — Hammond, Louisiana. And I’d never been around them, never seen them. I don’t know why, I was just captivated. I was like, ‘Woah, this is so cool,’” MacNutt said.

MacNutt said he then chased down a balloon pilot and asked how he could get instruction.

“And it just took off from there,” MacNutt said.

“All purple. Simple design. I figured if I made it all one color, I couldn’t screw it up too bad,” MacNutt said.

MacNutt said he built each of his five balloons because of either a need or a new idea.

“The one I just finished is because the purple balloon is a little too small to carry two passengers,” MacNutt said.

His most recent balloon is the most colorful one he’s ever built. But it’s not his favorite.

His favorite is his second-most recent creation, which he built in 2005 — a replica of a trans-Atlantic gas balloon.

“I built an exact replica as a tribute to the guy that designed and built the original one (Ed Yost). He’s kind of like the father of our sport,” MacNutt said.

MacNutt said it costs significantly less to build a balloon than to buy one.

MacNutt said typical balloons are about 70 feet tall and vary in weight.

“A commercial balloon, a standard balloon, might weigh 225 pounds — just the balloon part, the bag part. But home-built ones are typically half of that,” MacNutt said. “Because home-builts are not meant for commercial operations. They’re meant for just sport or fun.”

In the nearly three decades since he started flying balloons, MacNutt has accumulated more than 1,000 hours of flight time.

He said hot air balloon pilots have to earn the same license as airplane pilots.

“We take a different test, of course, but my license looks the same as any airplane license,” MacNutt said. “We take the same amount of training. A written test. A flight test.”

“And I think I like building as much as flying. I just like the process of it,” MacNutt said.

As an amateur builder, he is not allowed to charge people money to fly in one of his balloons.

But he does take his crew up after they help him set up and inflate a balloon.

MacNutt said the most important thing to him about balloon flying is the community that comes with it.

“Because it’s a real social sport. With airplanes, it’s kind of different, where you just get in your airplane and go. We have a big social circle. Like, we’ll all go fly together and then go eat breakfast and cut up,” MacNutt said. “If it was just me alone, I probably wouldn’t fly.”