Dig in to ‘Carolina Catch’ with a side of slaw 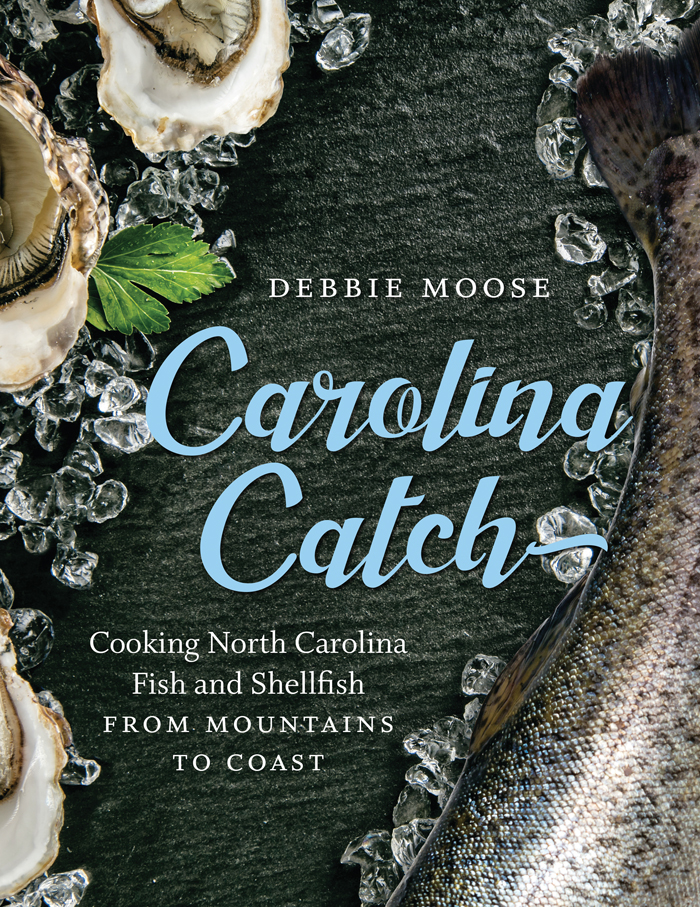 She headed to the North Carolina coast for “Carolina Catch,” an approachable cookbook packed with tips, tricks and hints that should make wary cooks feel good about seafood.

“I love fish and seafood and shellfish and for a long time I’ve wanted to write something about it,” says Moose, who lives in Raleigh, where she was once food editor for the News & Observer. She’s also a former Salisbury Post staffer.

“North Carolina has so much to offer, from the coast to inland fishing to fish farming.”

She found that nearly everyone she asked is afraid of seafood. “They are afraid of undercooking it, afraid of messing it up or overcooking it. They don’t like it because it gets too dry.”

So part of the book is “Best Basics,” with advice on how to choose the best seafood, how to store it and various standard cooking methods.

Since all the seafood is from the Carolina coast, she also includes a chapter, “Think Seasonal” on the best fish of the season. Seafood available year-round is probably from overseas, where there are problems with pollution and the use of slave labor.

That’s why cooks should move out of their ruts and try something other than flounder or shrimp. Shrimp is the No. 1 most popular food that comes out of water, Moose says.

“Shrimp is very forgiving; it’s sweet, tender and easy to cook, and it’s very versatile,” but there’s so much more. Popular seafood is overfished, so this book introduces the cook to new choices.

It helps the state’s fishermen, Moose says, and lessens the pressure on the overfished species. Fish from North Carolina are fresher — they don’t have to travel as far — and they are not “doused in preservatives,” she says.

Moose did an ocean of research for the book, and urges people who are concerned about the source of their seafood to ask questions and to ask for North Carolina catch.

She got to know so many different kinds of fish while working on the book that she is more confident herself. From our waters, you can find grunt, which is a white, flaky fish; sheepshead, which is becoming popular in restaurants; tilefish, a thin, white, flaky fish with a little sweetness, like snapper.

Dogfish or cape shark is like grouper, thick and firm. It’s so popular with the British for fish and chips that they get much of the North Carolina catch.

“Clams are really under-appreciated,” Moose says, “because people had bad experiences with overcooked clams.” They just need a short cooking time. And, if you need to open clams for a recipe here’s a hot tip — put them in the freezer and they’ll open up. “That has been a life-changing thing for me.”

Every seafood dish needs a side or a sauce, so there’s a section of slaws, sauces and even an oyster shooter recipe she got from her hairdresser.

Take a trip to the coast. Go to a fish market and get the freshest thing there. An easy recipe Moose uses over and over is to wrap the fish in foil with some seasonings, maybe a few vegetables, and then steam it. That’s all.

Moose will be at bookstores and kitchens to promote her book. You can check out her events at DebbieMoose.com.

Traditional Spanish paella includes mussels, shrimp, sausage, and chicken. My simplified version speaks with a Carolina accent, spotlighting the state’s abundant clams. I used an aromatic rice grown in South Carolina, but any medium-grain rice will do. Use a large, wide sauté pan or a paella pan, not a deep-sided frying pan.

Heat the olive oil in a large, wide sauté pan over medium heat. Add the onions, tomatoes, and 1⁄4 teaspoon of the salt. Cook gently, stirring occasionally, for about 10 minutes or until the onions are soft and the tomatoes have given up their juices.

Add the rice, swordfish, crushed red pepper, paprika, and 3 cups water, or enough to cover the ingredients (the amount will vary depending on how much liquid you get from the tomatoes). Season with the remaining salt. Add the peas. Place the clams in the mixture, gently nestling them into the liquid so that they are mostly covered.

Raise the heat and bring the mixture to a boil, then reduce the heat. Simmer, uncovered, for about 30 minutes or until the rice is cooked, the clams have opened, and the liquid is gone. You can gently shake the pan to redistribute the ingredients, but do not stir the mixture during cooking. Gently move clams if necessary to keep them in the liquid. Sprinkle with the parsley and chives and serve.

Notes: Discard any clams that don’t open after the cooking time. The crust that may form on the bottom of the paella, called socarrat in Spanish, is prized. If you smell a toasty but not burned aroma and feel a little gritty resistance when you poke the mixture gently with a spoon near the end of the cooking time, you have it. The socarrat adds a smoky note to the dish. 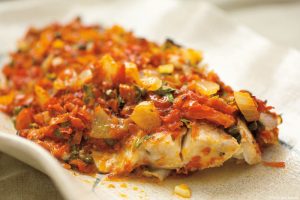 This recipe is a favorite at my house and is a great way to serve any flaky, medium-thick fish fillets. Cover the fillets completely with the sauce to keep them moist. You can find good cherry or grape tomatoes year-round, making them a nice choice for the sauce. Of course, the sauce will taste best with summer tomatoes.

1/3 cup olive oil, plus more for the baking pan

1/4 teaspoon salt, or to taste

Place the tomatoes in a food processor and pulse to chop coarsely. Do not purée.

Heat 1/3 cup olive oil in a large frying pan over medium heat. Add the tomatoes, onions, and garlic. Cook, stirring occasionally, until the tomatoes begin to give up their juice and the onions are soft. Add the oregano or marjoram, salt, and pepper. Reduce the heat and simmer, stirring occasionally, for about 10 minutes or until the mixture thickens slightly. Remove from the heat and stir in the parsley and capers or black olives. Taste and add salt if needed.

Preheat the oven to 350. Coat the bottom of a baking dish with a little olive oil. Place the fish in the dish, skin-side down. Spoon the tomato sauce over the fish, making sure to cover it completely. Bake for about 20 minutes or until the fish flakes and is done.

Serve with Italian bread for sopping up the sauce, if desired.

Smoked trout tastes milder than some smoked fish, which makes it a crowd pleaser. Briny capers and sharp red onions, along with a generous amount of black pepper, balance the rich cream cheese. The spread can be made up to 2 days before serving.

Put the cream cheese, mayonnaise, and smoked trout in the bowl of a food processor. Process until combined. Add the red onions, pepper, and capers, and pulse a few times until they are just mixed in.

Scrape the mixture into a container and sprinkle with the parsley. Cover and refrigerate for at least 8 hours or overnight. Serve with crackers.

All recipes from Carolina Catch: Cooking North Carolina Fish and Shellfish from Mountains to Coast. Text © 2018 by Debbie Moose. Food photography copyright © 2018 by Juli Leonard. Used by permission of the University of North Carolina Press.  www.uncpress.org