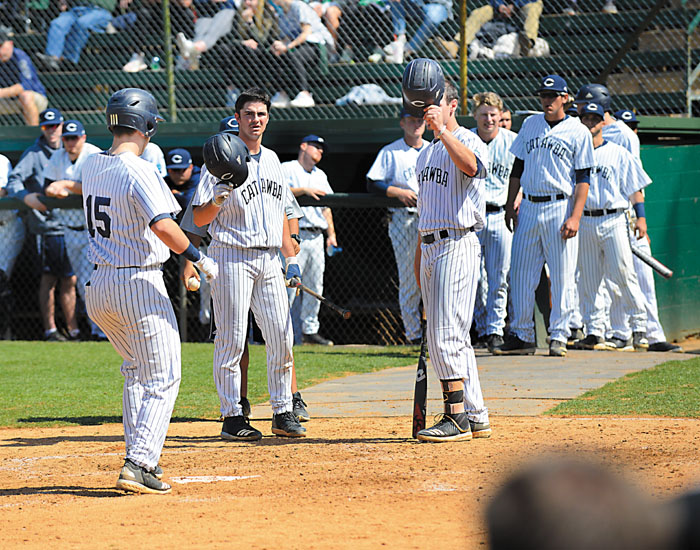 Catawba's Chance Bowden 15 is greeted at the plate by teammates on his homerun.. photo by Wayne Hinshaw, for the Salisbury Post

Both balls were caught. Catawba center fielder Luke Setzer and left fielder Kyle Smith had enough room to make plays in front of the fence, and Catawba right-hander Riley Myers went on to throw a five-hit shutout.  The 7-0 victory over third-seeded Carson-Newman knocked out the Eagles (28-22) and kept top-seeded Catawba (29-22) alive in the double-elimination South Atlantic Conference Tournament.

“Langhorne is a really good player, a transfer from Tennessee, and he hit those balls hard,” Catawba coach Jim Gantt said. “Both of them are out of Newman Park, but, fortunately, we were playing in a real ballpark today. Riley found some confidence. This was a very well-played game, and we were good defensively behind him.”

Gantt has been outspoken in recent seasons about the tight dimensions at Catawba’s home field at Newman Park. Having the center-field fence 360 feet away makes for wonderful American Legion entertainment with 17-year-old hitters, but the park has become too small for college baseball where muscular 22-year-old men are mashing balls over the walls with increasing frequency.

Myers, a former Salisbury High star, was one of the Catawba pitchers caught up in an offensive maelstrom this season. He allowed 16 home runs in just 60 innings and watched his ERA soar to 7.05. That’s deflating. He pitched the Friday games for Catawba, and those were the games against the opponent’s No. 1 pitcher. He entered the SAC tournament with a 2-6 record.

“It’s been tough,” Myers said. “I started off  the year strong, but halfway through the season, I stopped having any luck. We weren’t scoring as much on Fridays, and I was running into everyone’s best swings and everyone’s best pitcher.”

He battled through it. On Sunday he had the game everyone had been waiting for.

“It was just nice to have a little leeway today,” Myers said. “If I missed a spot, there was a chance we could still get an out. The ball wasn’t automatically leaving the park.”

The toughest inning for Myers was the first. Carson-Newman had runners at second and third with one out, and with Catawba facing elimination, Gantt was ready to get the bullpen busy. But then Myers made the pitch he needed to make.

“I got the cleanup hitter out with a changeup — he hit it straight up,” Myers said. “Then I got a strikeout.”

In the second inning, Myers finally got some luck — a line-drive double play.

In the third inning, Myers did a good enough job of holding a baserunner close that catcher Cameron Morrison was able to throw him out on a steal attempt. Sometimes, it’s the little things. That was big for Morrison, as well as Myers.

“That caught stealing helped a lot,” Myers said. “Instead of one on and one out, there’s two out and nobody on. Then their next guy got a hit, but it didn’t hurt us.”

Myers wouldn’t give up another hit after the third inning.

“Whenever he was in doubt, he just threw it to the outside corner and let them hit it to center field,” Gantt said. “He did a great job. He pitched up and down, in and out, moved it around. He changed speeds on his fastball.”

Myers said it was almost all fastballs on Sunday, but when you’re locating the fastball, it’s always the best pitch. And he had surgical location.

“Early in the game, I was falling behind the hitters 2-and-0 and 3-and-1 and they were getting some hits,” Myers said. “They were doing a good job of laying off some low pitches that we thought they’d swing at. But we adjusted to that.”

Catawba got Myers two runs in the top of the third. The key hit was by Jackson Raper, who fouled off several offerings before splashing a pitch just over the infield for a run-scoring single. Joe Butts got a second run home with a groundball.

Myers found a rhythm. He sailed through the middle innings.

“I went to the coaches after six innings and asked if there was any way that I could pitch on Monday,” Myers said. “They said there was no way that was happening, so I told them to let me finish this one. I wanted to save the bullpen for Monday.”

In the top of the ninth, Morrison grounded into an around-the-horn triple play. Not exactly a highlight, but it doesn’t happen every day.

“We’ll blame that one on Cam’s bum ankle,” Myers said with a laugh.

Myers finished the game. His 131st pitch produced a game-ending groundball to shortstop Jacob Nester. Catawba, which was stunned Friday by eighth-seeded Anderson but won on Saturday in an elimination game against second-seeded Wingate on Smith’s clutch homer, lived to play another day.

Myers struck out six, didn’t walk a batter and reduced his ERA to 6.13.

“It was a great feeling to win because the team really needed it,” Myers said. “We still have to win two on Monday, but if anyone can do that, it’s us.”

Catawba will play Lincoln Memorial, still unbeaten in the tournament, today at 1 p.m. and again at 4 p.m., if necessary. Catawba will have to beat the fourth-seeded Railpslitters (34-18) twice to win the event. Catawba lost two out of three to LMU at Newman Park.

Catawba won’t make the Southeast Regional field unless it wins the tournament.