‘All we can do is the best we can’: Morgan devotes herself to Yorkie rescue 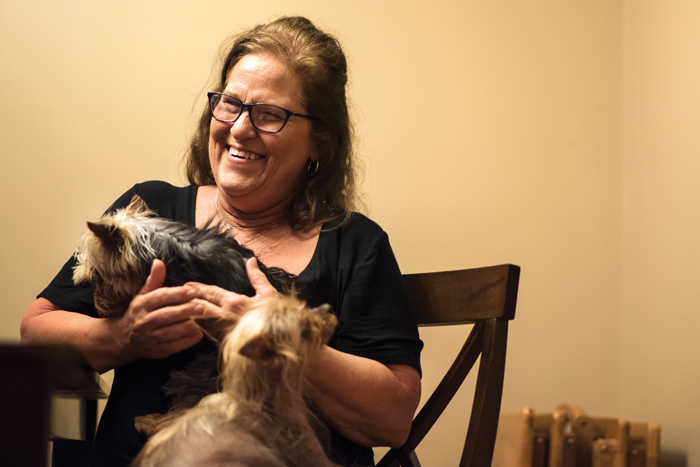 Judy Morgan laughs while holding Mia, back, and Allie on April 24, 2018. (Photo by Rebecca Benson)

GRANITE QUARRY — As you might expect, the yipping and yapping begin immediately on your arrival at Judy Morgan’s house.

At present she has 11 Yorkshire terriers — sometimes there are more — and the Yorkies sound an instinctive warning when someone new invades their space. But things quiet down quickly, and the dogs go back to the toy-sized cuteness they are known for.

Morgan serves as vice president of N.C. Yorkie Rescue, dedicated to the rescue of any Yorkshire terrier or Yorkie mix, regardless of age or condition. Morgan often fosters dogs who have come from some challenging situations.

Allie is blind and diabetic and was found in a parking lot.

“She was nothing but skin and bone,” Morgan says. “We got her on insulin. (Now) she’s just a happy little girl.”

Other dogs in the Morgan household include Harley, Brody, Jillian, Lacy, Dasher, Rudy, Reecie, Mia, Tuck and Peaches. Seven of the Yorkies have a permanent home with Morgan or her daughter. She is fostering the others and hoping she can find them a great home.

Harley came from an 80-year-old owner who purchased him from a breeder and discovered she couldn’t take care of a dog. “I said, ‘I’ll take her, rather than you take her to a shelter,'” Morgan recalls.

Then came Brody, a Yorkie who was living pretty much in the wild within a deeply wooded neighborhood. Nate was next. He had lived in a puppy mill in Gastonia for nine years in a crate that was too small, which led to him becoming hunch-backed.

The ashes of Nate and several other of Morgan’s cherished dogs from years past find a place of honor in small boxes on her living room mantel.

Morgan took in Harley, Brody and Nate as her own, and it was later she became friends with Melinda Housh, founder of N.C. Yorkie Rescue in Greensboro in 2006.

Over the past dozen years, the organization has rescued, rehabilitated and found new homes for more than 1,000 Yorkies and other small breed dogs.

Since 2014, Morgan figures she has fostered and placed in new homes about 75 Yorkies. Some of the dogs make quick stops in Morgan’s house before an adoptive home is found. Others, such as Allie, might stay with Morgan for months.

The circumstances behind Yorkies needing to be rescued fall into several categories.

They are surrendered by owners who can no longer care for them. They are taken to shelters when owners cannot be found. They are rescued from puppy mills and backyard breeders. They are hit by cars, and again no owners can be located.

Donations to the non-profit organization help in paying for veterinary costs. Dogs with special needs might require dental treatments, surgeries or, as in Allie’s case, daily insulin shots for diabetes.

Morgan says shelters and other organizations throughout the state have come to know about N.C. Yorkie Rescue and call it often for help in reducing their population counts.

“Everybody is looking out for each other,” she says.

N.C. Yorkie rescue screens its potential adoptive homes in trying to make sure the dogs it has fostered will be going to the right families.

“All we can do is the best we can,” Morgan says.

Some of Morgan’s rescue stories pull at your heart strings.

Sniper was a Yorkie with horrible skin and no hair. Morgan changed his named to “Skipper,” nursed him back to health and fell in love with him. But the day came that a woman in Wilmington was chosen for Skipper’s adoption.

The new owner changed his name again to “Gabriel,” the name of Morgan’s three-month-old grandson who had passed away. After three years, the owner in Wilmington still stays in touch with Morgan and sends her pictures of Gabriel.

Why has Morgan devoted herself to Yorkies, so much so that she’ll be attending the upcoming “Crazy Yorky Ladies Jamboree” in Grand Rivers, Kentucky?

Morgan’s husband, Jerry, died in 2004. Her two children are grown, and she has a teen granddaughter, Kayla, who helps her with the dogs. They stagger the dogs’ baths, so they don’t all happen at once.

“I needed a purpose,” Morgan says. “I just needed somebody to need me, and it’s rewarding to me.”

To take care of her Yorkies, Morgan rises at 6 a.m. daily. She has to give Allie her insulin shot and tries to feed her separately. Morgan works full-time in Salisbury at the Food Lion headquarters and travels home at lunch to feed and check on her dogs.

She fills their water bowls about 10 times a day.

While at work, she often checks her home’s security cameras to see what the Yorkies are up to. Once CPI contacted her and reported five suspects in the house. It turned out those suspects were Yorkies.

Morgan brushes the Yorkies constantly, and they have to be groomed every six to eight weeks. Her groomer, Evelyn Johnson, makes house calls, for which Morgan is eternally grateful.

N.C. Yorkie Rescue will adopt dogs from out of state, but members who provide foster homes must live in state. Morgan once drove from Greensboro to Georgia one Sunday afternoon to rescue a Yorkie puppy. She also has journeyed to the coast on similar missions.

“We don’t have near enough volunteers,” Morgan says.

Come Aug. 1, Housh plans to step down as N.C. Yorkie Rescue president and Morgan will slip into that position. The organization has five board members and about 30 approved foster homes.

“My goal is to get a building,” Morgan said. “I’m writing a grant — thank goodness for the web.”

A building would provide a place — not a bedroom, for example — to allow for needed quarantines of animals newly surrendered. It would help with scheduled medical care and alleviate some of the pressure on foster homes.

Morgan, 57, wishes she could do more for Yorkies.

So what dogs are allowed to jump on the bed with her at night?

“Anybody that wants to,” Morgan says.