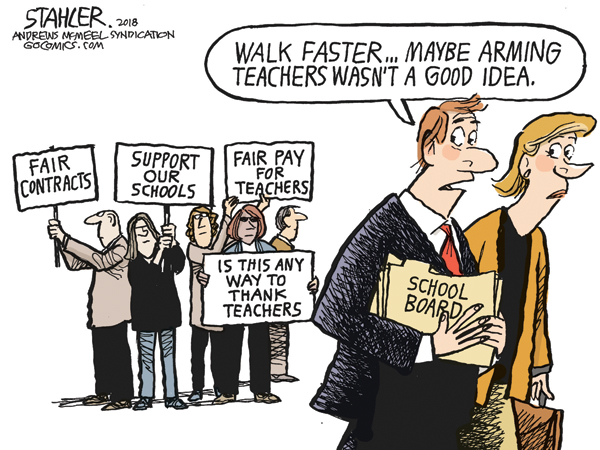 What is driving wage growth? Or rather — what has been tapping the brakes?

One theory making the rounds is that increasing concentration of employers is holding down workers’ bargaining power. My colleague Noah Smith put together a compelling explanation for this: Having fewer employers gives employees less bargaining power.

But it’s hard to disentangle increasing firm concentration with some of the other big trends holding down wage growth over the past several decades, and some of the signs of increased labor market bargaining power in 2018 are occurring in consolidated labor markets. That points to another theory: labor market psychology.

Workers once thought jobs were scarce, so they didn’t agitate for more pay. Now that perception is starting to change.

The best example of this may be the teacher unrest in West Virginia, Kentucky, Oklahoma and Arizona. Teachers are a prime example of captive labor. Teacher credentials in each state cost time and money, a sunk cost that discourages employment switching across state lines.

Two months ago, the plight of teachers in these four states — places with stagnant or falling wages over the past decade — looked like evidence for that theory of employer concentration and bargaining power. But then something changed.

These uprisings are being heralded as showing the importance of unions, but … the unions aren’t new. For more than a decade, teachers’ unions couldn’t overcome the fiscal and political realities of these states. The main thing that changed was the workers’ psychology — being fed up and being willing to fight for a pay raise.

Another area of the labor market where workers have wage growth momentum is the retail sector. And Walmart, the sector’s largest employer and the firm that concentrated the industry for decades until Amazon came along, has been leading the charge for a few years now. Starting in 2015, Walmart has steadily increased its minimum wage, forcing competitors to respond.

Speaking of Amazon, Bloomberg reported earlier this year that when the e-commerce giant opens a fulfillment center in a community, it leads to pay increases as that employer drains the local labor pool for similar workers. No signs of employment concentration holding down wages here.

In his piece, Smith points to research showing that government-mandated minimum wage hikes don’t have the negative impact on employment that its opponents fear. But that’s a whole other animal. Government increases tend to come when the momentum is already behind them. When unemployment is high they’re rarely proposed or adopted. It’s only when employment is good that wage laws win support. For instance, the last time the federal minimum wage was increased was in May 2007, when the unemployment rate was at 4.4 percent, its low for the cycle. Because minimum-wage increases tend not to be random, but occur during strong labor markets, it’s harder to evaluate them without accounting for the underlying economic strength at the time.

With governments increasingly looking to raise their minimum wages, large employers like Walmart setting the bar for low-end wage growth, and public teachers suddenly believing they can win significant pay increases, it’s hard to say in 2018 that firm concentration is holding down wage growth. That may have been the story in the past, but now labor markets have tightened and labor market psychology has changed — for employees and employers.

Sen , a Bloomberg View columnist, is a portfolio manager for New River Investments and has been a contributor to the Atlantic and Business Insider.