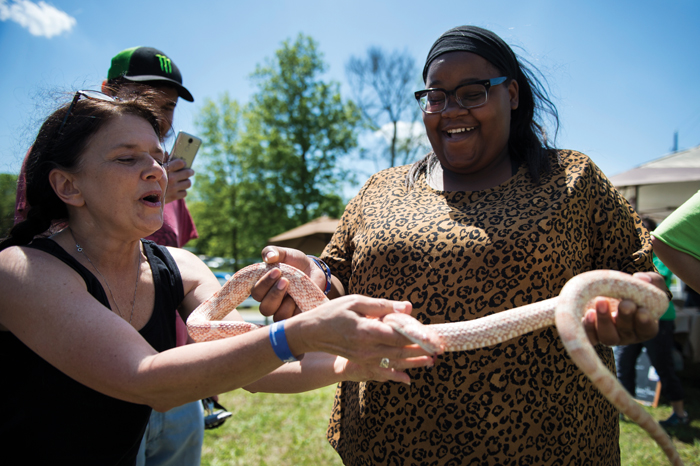 SALISBURY — It’s good to be back.

After a two-year hiatus, Earth Day Jam returned Saturday with its mix of live music, homegrown brews and food, and an environmentally conscious focus.

“We’re looking forward to becoming an annual event again,” said Stacey Carter, who along with Ashley Honbarrier founded Earth Day Jam in 2012 and worked closely on the event with the LandTrust for Central North Carolina.

After a successful 2015 Earth Day Jam raised more than $9,000 for LandTrust, the jam took a break while Carter and Honbarrier looked for a way to keep the Earth Day mission alive year-round.

Together they formed Happy Roots, a nonprofit organization trying to provide nature-based therapeutic and education services to the community. Proceeds from the 2018 Earth Day Jam benefited Happy Roots and its programs.

Saturday’s family-friendly jam, held at Susan Cloninger’s Dark Before Dawn Farm off Seventh Street Extension, lasted from noon to midnight with continuous music on the main and side stages.

Among the headline acts were Grammy-nominated YARN from Brooklyn, New York, No. 9 Coal, Big Break and Rebekah Todd and the Odyssey, to name a few. Local musician C.J. Peters served as “roving busker,” and as he delivered bear hugs to friends, he described Earth Day Jam as a day of 1,000 hugs.

People spread out in lawn chairs, under canopies, on blankets and in tents. They also took in the gorgeous day from hay bales and fence rails.

The major sponsor was Power Home Solar, a Mooresville company that makes solar panels. The other sponsors and dozens of volunteers — all wearing fluorescent green Earth Day Jam T-shirts — were appreciated and too numerous to try naming, the founders said.

Andy Maben, the brewmaster and co-owner of New Sarum, was home-brewing beer and giving it away during the first Earth Day Jam in 2012, before New Sarum was even established. New Sarum was the beer of choice at Saturday’s festival.

Some volunteers worked for several days to get the farm mowed and ready for Saturday. James River provided the tractors for mowing and two Gators to help with the across-pasture hauling to assist vendors in setting up.

“They saved the day. We love them,” Carter said.

Elise Tellez, program director for the Piedmont region of Muddy Sneakers, manned a booth informing visitors about the organization’s mission to awaken fifth-graders’ connection with the natural world.

It offers students in participating public schools the chance to take at least six curriculum-aligned expeditions in the school year, matching Muddy Sneakers naturalists with students who become the field scientists.

Tellez said five Rowan-Salisbury Schools are now participating. “We’re really excited to be in this region,” she added.

Carolyn and Harry Peterson were selling the colorful jewelry they make from some unusual items, including sweet potatoes, N.C. road maps and sheet music.

“Every single thing is one of a kind,” Harry Peterson said.

The N.C. road map bracelets come with travel charms. The Petersons manufacture the jewelry out of their basement in Salisbury, where Carolyn also does her professional voiceover work.

Ashton Vaughn and C.C. Barnes manned a tent for A.C.’s Healing Herbs & Gems, and they had on display all manner of ores, crystals, abalone shells, gemstones and herbs such as eucalyptus, sage, lavender and mugwort.

Elsewhere, Shay Myers was able to hold a rat snake with the help of trainer Cindy Bernhardt, who also had her red-tailed hawk, turtles, a hedgehog and bearded dragon on hand.

“I got the business end, so it can’t bite or poop,” Bernhardt said in preparing to have Myers hold the snake named Peaches.

Over its first year, Happy Roots has tried to revitalize the West End Community Garden in Salisbury. It has partnered with local youth organizations to teach gardening and horsemanship.

Happy Roots also is working with Henderson High School to utilize its greenhouse for starting plants and building a sustainable aquaponics system, to become part of the science curriculum and also produce food for students and their families.

Through Happy Roots, Carter has overseen two Timber Ridge Juvenile Correction Center groups, as well as community service workers who are meeting required hours of service in the garden.

Saturday’s Earth Day Jam just seemed like a natural extension of what Happy Roots is about all year-round, as Carter and Honbarrier envisioned.

And the festival has always seemed to luck out with the weather.

“Another beautiful day,” Carter said. “How do we do it?”