Old Town Soap Company moves across the street to expand 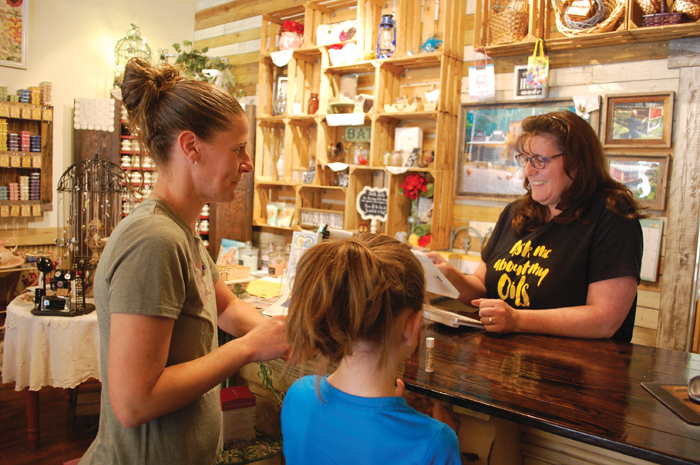 Old Town Soap Co. owner Beth Engelhardt checks out Renee Vernarsky and Victoria Russell, 8, at the 113 South Main Street location. They will be moving across the street to 104 South Main Street in July. (Jessica Coates/Salisbury Post)

CHINA GROVE — After almost a year of feeling cramped in her 800-square foot soap shop, Beth Engelhardt is finally moving into a larger space.

And she didn’t have to go far to find it.

Their new location will be at 104 South Main Street, diagonally across the street below Oasis School of Music.

Beth said she’s excited to have room to expand her product offerings.

“We’re going to carry a whole bunch of different bathrobes and slippers and bath towels and rugs,” Beth said. “Anything and everything that’s kind of bath-esque.”

“If it’s bath and body products, she makes them more natural with better products. People have asked for them. We just don’t have anywhere to keep them. Or places to keep the containers to make the product to put on the shelf,” Brent said.

Beth said she started making soap when she worked as an operations manager for Sears in 2011.

“I had a whole group of people who worked for me and I wanted to do something special for them for Christmas. I wanted to make them soap,” Beth said. “So (Brent) and I went to take a soap-making class and all my associates got soap for Christmas that year.”

Beth said it was Brent who “prodded” her to continue the craft.

“She’s always been good at arts and crafts and doing all that stuff. And she enjoyed it. It was neat. It was creatively challenging. And I guess I encouraged her,” Brent said.

Beth said she’d done “a little bit of every craft imaginable” before, including ceramics, painting and beading.

She said the chemical process of creating soap makes each batch a bit of an adventure.

“You never know what you’re really going to get until you cut the loaf,” Beth said. “You’re mixing your soap and your fragrance and the colors and you pour it all together and who knows what you’re going to get when you slice it out, you know?”

Beth said she makes sure all of her ingredients are paraben and phthalate-free.

“None of the bad stuff is in it,” Beth said.

Beth’s friend Renee Vernarsky said she first came to the store when she was living in China Grove almost three years ago. Vernarsky has since moved to Concord but still comes to visit the store at least once a week.

“I’ll drive it because I know it’s good stuff. I know it doesn’t have the bad stuff in it, which is why it kind of worked out perfectly whenever they’d first opened. I’d just gotten into the no-chemicals,” Vernarsky said. “It was perfect timing for me.”

“We’re here all the time, and we stay for a couple hours most of the time whenever we come,” Vernarsky said. “And it’s just one of those, ‘OK, you move here so I can be here.’ It’s a bunch of shifting. So that’s been the dream for over there — we can move.”

Brent said the new space, which is almost three times the size of their current location, would have a 37- by-17-foot room for making products.

He said they currently have to make all of their products at their home in Kannapolis.

“Thirty-two-by-17 (feet) is almost the size of this building,” Brent said. “So it’s going to be like this full building to make her product, almost.”

Brent and Beth are renovating the new location on their own but say that it’s nothing new. They renovated both their current space and their home in Kannapolis.

Brent and Beth said they are hoping to have the new location open in July.

Next Big Idea Pitch Contest will give entrepreneurs chance…