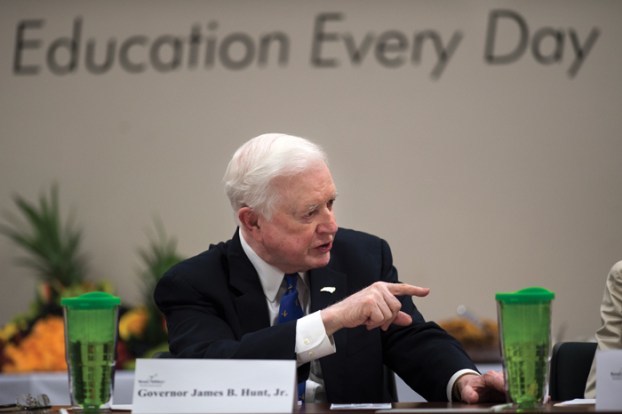 Jim Hunt on education: ‘We need to be investing’ 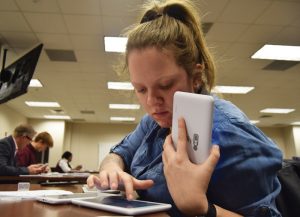 SALISBURY — Former Gov. Jim Hunt is 80 years old, but you might say he has a young heart — or at least a heart for the very young.

A relentless advocate for public education during his 16 years as governor — 1977–1985 and 1993–2001 — Hunt has always taken deep interest in early childhood education.

That was evident Friday when Hunt and wife Carolyn came to town to learn more about ApSeed, a preschool e-reader developed by Greg and Missie Alcorn of Salisbury. The Hunts met with the Alcorns and others involved with ApSeed at the Wallace Educational Forum.

The Alcorns’ nonprofit organization started giving the devices, called seedlings, to Head Start children a couple of years ago, with the goal of better preparing them for kindergarten.

Spreading the devices to more agencies — and Davie County, thanks to a Mebane Foundation grant — ApSeed hopes to reach 6,000 children by the end of this year.

After Hunt expressed interest in ApSeed some time ago, Alcorn sent him a device to try. The only problem arose when, once the battery faded, Hunt discovered he’d lost the charging cord.

During the Friday visit, Hunt heard presentations on the ApSeed devices’ use and impact. Afterwards, he sat down for a brief Q&A. Here’s an edited transcript of that interview:

Q: What keeps you going?

A: My belief in people, and what they can be and what North Carolina can be if we help ‘em become the smartest and best people they can be. And that’s why I’ve always made education No. 1. We want to have the best teachers we can have and we’re really concerned with focusing on developing in the early years, finding some of the technology that enables us to do a better job in those early years. We’re finally getting to the place where we can do the full development in the most effective way. I really believe you here in Rowan County are leading the state.

Q: You had a column published in The News & Observer about North Carolina having the largest number of teachers with National Board Certification. What will it take to raise student achievement to the highest level, too?

One is having the best teachers. I want every child to have an excellent teacher every year. And pay is a very important part of that. Did you know that teachers’ salaries are higher in every state around North Carolina? Virginia, Tennessee, South Carolina. How about that? How you feel having South Carolina above North Carolina?

The second big thing we’re realizing is that technology helps children learn — better. It can make it more exciting, more interesting to them. And we’ve also of course learned that this learning begins so early in life. That’s something my wife was preaching early on, with our four children. I was too dumb to fully appreciate it. Then as I began to learn it, we put in kindergarten, and then we put in Smart Start, and now we’re working on stuff like this (ApSeed).

I think it’s really consistent with the history of Rowan County and its commitment to progress. It’s a county that’s careful about spending its money, but you have time and again spotted those things that can help you have excellent education and a bright future. … You’ve got a great history. I like to say we like to make our own history.

This ApSeed technology is so exciting and can be such a big part of making the future what we want it to be.

Q: There’s been a lot of talk (and action) about tax cuts. How important is that to recruiting industry?

A: It is not important. We’ve cut taxes all we need to and in some cases too much.

Q. It seems like the schools are re-segregating. What’s your take on that?

A: I’m very concerned about it.

It is causing poverty. It’s causing less partnering and working together. And it’s hurting us socially and economically. If we’re divided up into different races and different markets, and some of those areas have good schools and others have bad ones, but nobody knows about it because we’re separate and apart, we’re going to go backwards. I want North Carolina to go forward.

We’ve got to be fair and realize what a segregated system means. It hurts those people who are left behind, and it hurts all of us because we are leaving people behind.

Q: Do you think charter schools have worked to North Carolina’s benefit or detriment?

A: I favor good charter schools, but I do not favor too many so that the regular public schools are in danger. It’s time now; we probably need to slow down in increasing the numbers.

Good public charter schools can demonstrate special approaches and meet special needs, so you ought to look at it in the whole way. Also realize, if we’re using them as a way to segregate the schools — and in a few places in North Carolina, I think that’s happening — then they’re making a real mistake.

Q: How do you think Governor Cooper is doing?

A: Good. He’s a good man, a good Christian man. He cares about people deeply. I knew his mother, who was a wonderful school teacher, and his father was a great citizen in my neighboring county. I know him to be a great, kind, caring person who understands how you bring about jobs and economic development, and he’s not getting enough support from the legislature. I hope we’ll make a change this fall so people will start working together.

Q: The Repubicans have done a lot to rein in his powers. Which do you think are the most important ones?

A: The appointment of a number of things. In that way, they violated the Constitution, in my opinion, because you’re supposed to have the separation of powers, equal branches of the government. It’s high time we get back to a time when the parties are working together and the legislature and the governor are working together, not fighting each other and just trying to dominate each other