‘I never really knew what a community could do’ 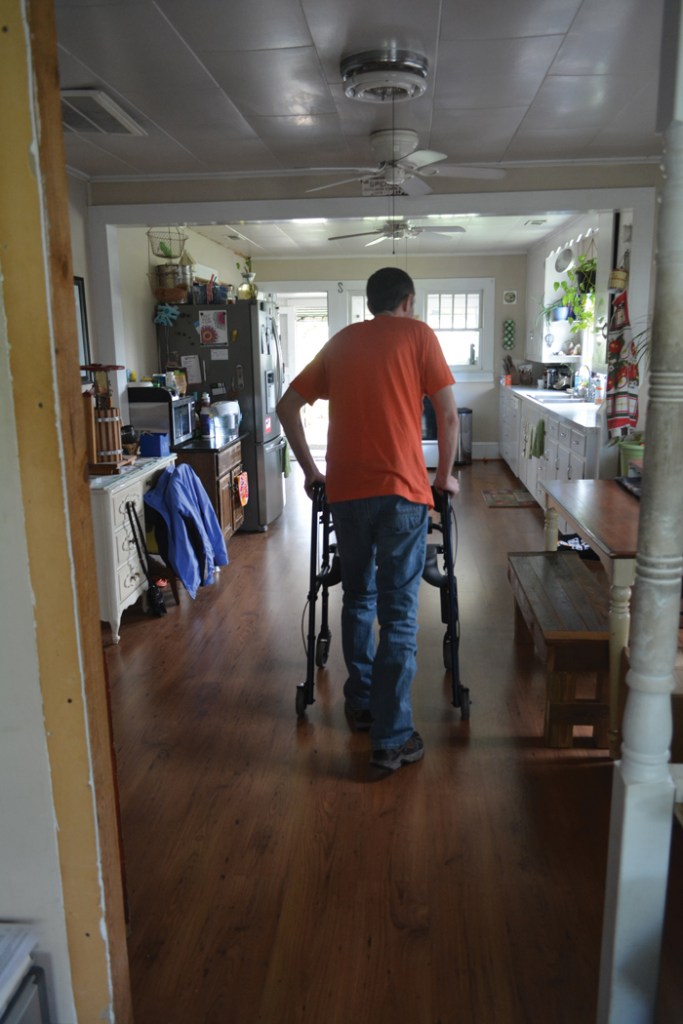 Justin slowly makes his way from the kitchen to the back yard. 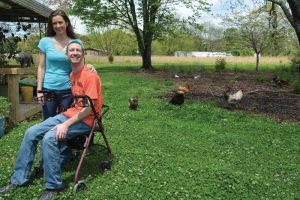 Justin Smart and his fiancee, Candice Basinger, outside their home in Salisbury. Justin has been diagnosed with Primary Progressive Multiple Sclerosis, and will go to India in June for treatment. The community has raised more than $40,000 for Justin and Candice to make the trip.

Justin, now 37, was diagnosed six years ago with Primary Progressive Multiple Sclerosis. Little by little, this progressive disease — the worse type of MS you can have — has robbed him of physical and mental abilities. He started using a cane, and now gets around by walker. His gait is slow and unsteady. The once active Justin, a commercial diver by trade, now waits hours in the morning for his body to get going.

After the “big gun” drugs and infusions didn’t help, Justin and his fiancee, Candice Basinger, started researching treatment methods. They learned that stem cell transplants to treat MS are available in India. The complicated procedure uses chemotherapy and Justin’s own harvested stem cells to “reboot” the immune system. For Justin and Candice to spend a month in India, the price tag came to $40,000. The procedure itself is available in the United States, but has not yet been approved to treat MS.

But, Justin says, “I don’t have too much longer to wait.”

“If we were too weak for the procedure,” Candice explains, “they would not do it.”

So in December, Justin and Candice began raising money for the procedure, flights, passports, visas, travel insurance, immunization shots, and other expenses.

The first event was a dinner with Cedric Cuthbertson, owner of CAC Plumbing. Candice is a plumber’s helper, and now keeps the books for her brother, Brandon Basinger, owner of Spencer Plumbing Company. Their dad, the late Gary Basinger, founded the company — his dad was also a plumber — and their stepmother, Debbie Barnhardt, is owner of Debbie Barnhardt Jewelers in Spencer.

Each December, Cedric hosts a customer appreciation dinner. The event assists a family in need, and this year, Justin and Candice were the recipients.

Then, Justin’s physicians assistant, Jeff Taylor, did an event for him through the Samantha Harkey Foundation. The foundation is named in memory of Samantha, an MS patient of his who died of MS at age 23.

Justin was the first person the foundation has assisted.

There have been a tool raffle and a gun raffle, and a BBQ lunch organized by Grace Bible Church. A cousin of Candice held an oyster roast in Charlotte.

“There’s a funny side note about the gun raffle,” Justin says. “The winner didn’t want the weapon, so he donated back and we sold it on top of everything else.”

Candice sent letters to customers and friends. And now they have the money.

Justin and Candice met at a party in 2007. He is from this area, but was living in St. Louis. He was on his way to dive school in Charleston, and stopped by home. They met through mutual friends, and got engaged in 2012. Less than six months after they bought a house together out in the county, Justin was diagnosed with MS.

Even though things are hard, Candice says, “I’m still here.”

Part of the money raised will go toward making a new bathroom off the master bedroom, so Justin won’t have to move around the house much after his procedure. He must stay away from germs as he’ll have a weakened immune system. They’ve purchased HEPA filters to keep the small house extra clean. A large group of local contractors and handymen will be volunteering their time for this project.

“There are hundreds of people who have helped us along the way,” Candice says.

“I don’t know how to say thank you,” Justin says, “but when someone needs help moving, give them my number. I’ll be there. I would love to get to that point some day.”

He’d also love to get back to work. For a time, Justin helped Brandon until he felt unsafe on the job. Before that, he’d worked all over the Southeast as a commercial diver. He worked for cities, nuclear power plants and towns in a variety of setting to inspect, repair, build and demolish underwater sites. Though inland diving, he worked in lakes, rivers, reservoirs — even water towers.

He’s been on disability for the past four years, and will turn 38 in June. Candice is 39. These days, he spends a lot of time resting. One of the three cats, Shady, is a frequent lap companion. They also have 10 chickens.

“We name ‘em and eat ‘em,” Justin says, chuckling. He’s talking about the chickens, of course, not the cats!

He gets a lot of support from Candice, but he also draws support from the local MS support group. It meets the second Monday of every month at 6:30 p.m. at the Hurley Y, September through May. (MS patients are especially sensitive to heat.) Christine Scotton leads the group.

Besides his friend April Weaver (see accompanying story), Justin is the youngest member of the group by a generation. About 20 people attend each meeting.

“There’s fellowship,” Justin says. “And you are free to talk about the things that bother you with people who understand.”

He may be the youngest member of the group and the one in the worst shape, he says, but he’s also the most stubborn. And he’s touched by all the community support.

“As a diver, I have traveled a lot,” he says, “and I never really knew what community could do. When I got sick it was overwhelming to see people come together and give and help.”

Pastor Jason Brilliant has seen that community support firsthand. His son Riley, is a 9-year survivor of a stage 4 brain tumor. He’s now thriving. Jason and Brandon, who spearheaded the event at Grace Bible Church, where Jason is pastor, are good friends.

“I have been a part of several fundraisers, but never have I seen so many people come together to show someone God’s love,” Jason says. “We packed more than 700 meals that day, and had to stop selling tickets because we didn’t know if we could keep up with filling orders. We have been and will continue praying for Justin — that he will feel God’s love for him, and that he will be able to go to India and get the treatment he needs, and that he will experience healing from this terrible disease.”

Debbie has a large poster of Justice and Candice in her jewelry store. She also marvels at all the community support.

“People have come in the store, read the poster, and have given money,” Debbie says. “It’s just amazing the heart of people. Everybody who hears about Justin and Candice wants to help. There’s still love in people’s hearts. Rowan County is such a good county. It touches my heart.”

Justin and Candice will likely continue to feel that support, even all the way in India.

“Everybody has come right behind me to push me up this hill,” Justin says.