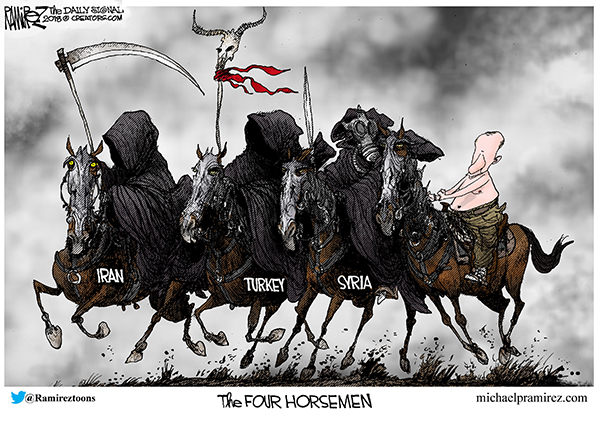 Donald Trump’s call with allies to strategically bomb Syria is to be applauded. For too long, pacifist foreign policy has allowed other nations to exploit U.S. resources while not being accountable to us for bills incurred on their behalf. Trump has begun to turn the tables, with positive results.

When Russia invaded neighbors who had sought their freedom, often using lethal force on their citizens, the United States stood by and did nothing. When North Korea first threatened its citizens and those to its south, the USA again stood silent. When Iran showed its true colors and took out thousands of its own citizens, the fix was in, making the USA a patsy in a knowing game of chicken.

The political cancer compromising U.S. foreign policy and national resources needed for our defense should make us all tremble. The nation’s unwillingness to engage in efforts to stop the genocide of powerful nations upon its citizens should make us uncomfortable.

If people are denied homeland protections, they will continue to seek homes elsewhere. Europe and others are closing their borders to these immigrants, as are many Muslim nations. Unfortunately, the landing place displaced residents prefer is the United States,which has been too generous to too many.

What will be the longterm rationale for such interventions? Will we go after African dictators who, with Russia and China’s input, are slaughtering thousands while stealing strategic minerals to take to their homelands?

As a Jew who happens to be black, the stories of the Holocaust and the extermination of my people for political expediency never leave me.

The collateral benefit of Trump’s action has been not only his willingness to talk to leaders but also to be decisive about harsh penalties. That has brought North Korea to the table with a willingness to lay down its nuclear capabilities. Trump called a bluff and showed his willingness to strike while the iron is hot. That decisiveness in defense of this nation is long overdue.

The need to stop caravans of people from entering this country illegally is essential. Any other approach would fail to put citizens’ needs first.

The corruption of citizens willing to try to overturn a duly elected president should make us afraid, very afraid.

We should not be for socialism but a representative democracy where people don’t always get what they want, but can get what they are willing to work for.

Whether the president is unfaithful is not a venue for me to delve into, but note that when John F. Kennedy was so engaged, with dozens of women trouncing through the White House, they called it “Camelot.”

Maybe we are searching for the 10 good men who could save a nation and rebuild its fortunes. They all have their flaws.

My Turn, Richard Roberts: An outsider’s view of poverty