QB Allen eager to clear the air with Bills teammates 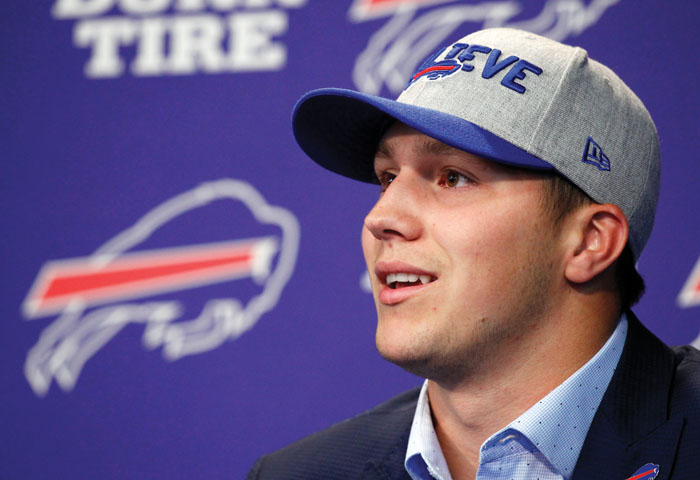 By JOHN WAWROW, AP Sports Writer
ORCHARD PARK, N.Y. (AP) — Bills defensive end Lorenzo Alexander is ready to give rookie first-round pick Josh Allen the benefit of the doubt based on how apologetic the former Wyoming quarterback has been acknowledging a series of racially insensitive tweets he posted while still in high school.
Alexander, a respected team leader, expects his teammates to do the same and provide Allen a fair opportunity to clear the air.
“He has shown maturity to own it. He wrote those words. He’s not using a cop-out,” Alexander said Friday.
“I think the biggest thing now is to earn the respect of his teammates by the way he comes in and works. And when guys ask him, just being open and honest about it,” he added. “And I think most guys will accept his answer based on who he is.”
Allen agreed when informed of Alexander’s comments, and is eagerly awaiting the opportunity.
Twice repeating the phrase “as soon as possible,” Allen called it important to apologize for what he posted and show Bills players who he is today.
“It’s something that I wouldn’t be afraid or ashamed of doing,” he said upon arriving at the team’s facility a day after Buffalo traded up five spots in the NFL draft order to select Allen with the seventh pick.
“I put it on my shoulders,” he added. “I made a mistake and I just want them to know who I am, because once they get to know who I am, I think they’re going to like what they see.”
Allen traveled to Buffalo along with fellow first-round draft pick, Tremaine Edmunds. The Bills traded up six spots to select the Virginia Tech linebacker with the 16th pick.
The trades left Buffalo with just the 96th pick on Friday, with which they selected Stanford defensive tackle Harrison Phillips. He’s listed at 6-foot-3 and 307 pounds and was a two-year starter with the Cardinal. Phillips led Stanford with 103 tackles while adding 7 1/2 sacks and earned first-team Pac-12 honors in his senior season last year.
Phillips will have a chance to develop in Buffalo on a defensive line that features two veteran starters in Kyle Williams and offseason free-agent addition Star Lotulelei.
Allen has been the focus of attention since Wednesday night, when Yahoo Sports reported the quarterback sent the now-deleted tweets in 2012 and 2013. They contained racially insensitive language and offensive statements.
He has repeatedly apologized for the posts, while saying he was “young and dumb” in parroting rap lyrics and catchphrases from TV and pop culture.
Allen also expressed relief in how the Bills stuck by him in making him only the franchise’s fourth quarterback to be drafted in the first round. The selection only happened after general manager Brandon Beane spent much of Thursday speaking with Allen, his coaches and former teammates to be reassured of the player’s character.
Allen acknowledged becoming emotional during a half-hour phone conversation with Beane.
“I just really wanted him to know the type of person I was,” he said. “I was embarrassed by everything that happened. It’s something that I wouldn’t wish upon my worst enemy.”
Coach Sean McDermott said he consulted with his team leaders once Allen’s tweets became public, while informing them of the possibility of the quarterback being selected.
“We take these things seriously in respect to adding any player,” McDermott said. “And when this came up, it went to another level.”
Alexander said the Bills established a strong leadership group last year in confronting various issues — from a major roster overhaul to finding consensus on how to handle anthem protests. They finished 9-7 to end a 17-year playoff drought which the longest active streak in North America’s four major professional sports.
Alexander said Bills defensive end Eddie Yarbrough vouched for Allen after the two played together at Wyoming in 2015.
“I respect Eddie and his opinion,” Alexander said. “So I would be foolish not to extend grace in getting to know this young man who’s coming into our locker room.”
It wasn’t lost on Alexander, either, that the Bills previously welcomed Richie Incognito after the offensive guard was out of football for 18 months following his role in the Miami Dolphins’ bullying scandal in 2013. Incognito became a Bills leader before abruptly announcing his retirement this month.
“I don’t see why this situation can’t be any different,” he said.
“I think we have a strong locker room. We have leaders who promote healthy conversation,” Alexander said. “We will move past this. And we’ll look back and it won’t even seem like it was as big as it was made out to be.”
___
More AP NFL: https://pro32.ap.org and https://twitter.com/AP_NFL