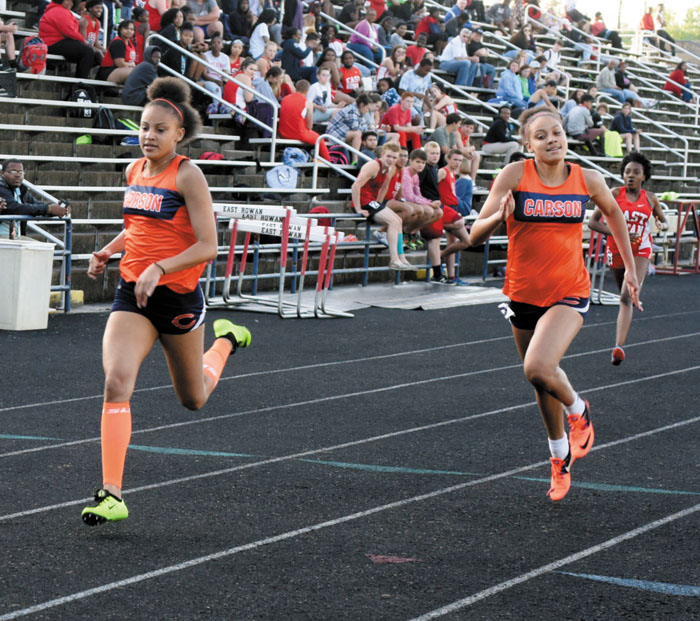 GRANITE QUARRY  —  Carson’s 5-foot senior Taylor Wiggins was physically and mentally drained. The steps leading up from the East Rowan track must have seemed like Mount Everest to her tiny legs,  but she smiled as she made the slow climb.

Wiggins hadn’t won an individual event, but she was a team champion. A stellar student headed to Wake Forest University, she’ll remember that championship feeling a long time.

“Whatever it took today, that’s what I tried to do,” Wiggins said. “Whatever the team needed.”

Wiggins ate a lot of dust from South Rowan’s distance phenom Madison Lowery on a long Friday evening, but Wiggins and teammates Olivia Gabriel and Brianna Hargrove, who had similar roles, were good soldiers. They kept plugging and kept a parade of points coming for a blue-collar team anchored by two superstars — junior twins Mikaila and McKenzie Gadson.

“We’ve got a small team, so every girl has to help out in multiple events,” Carson head coach Ashleigh Kirkpatrick explained. “Those seconds, thirds and fourths we got and all those relay points we got? They added up at the end of the day.”

The Gadsons were super. They went 1-2, with McKenzie winning in the 100. They went 1-2, with Mikaila winning in the 200. With both Gadsons teaming with Hargrove and Malia Hughley, Carson won easily with a brisk 1:46.20 clocking in the 4×200. McKenzie added a win in the long jump. Mikaila ran a winning PR in the 400, churning the track in an impressive 56.72 seconds thanks to a push provided by West’s Deja Phillips.

“She was running with me, so I was getting nervous,” Mikaila said. “But I picked it up the last 200 meters.”

McKenzie, a first team all-county basketball standout and the 2017 Rowan County Athlete of the Year as a sophomore, was thrilled for her sister to take center stage for a change. She wasn’t surprised to be nipped by her sibling in the 200.

“I’m focused mostly on basketball, but Mikaila really trains hard for track and she’s improved so much from last year,” McKenzie said. “Track is her thing, and she was great for our team today.”

Both Gadsons were credited with 30.5 points for the meet. Those numbers were derived from two firsts for 20 points, a second place for eight points and 2.5 points apiece for their part in a winning relay team.

“We’ve got a lot of great kids,” East coach Laurie Wyrick said. “But we don’t have superstars like the Gadsons. They win everything they’re in.”

Wiggins  scored 16.5 points for the Cougars, while  Hargrove produced 16 and Gabriel 14.

With the track meet taking place on a Friday after a postponement, there were conflicts with Carson soccer and softball. Maci Cooper won the triple jump and helped out in the relays before heading to softball. Taylor Conrad and Lani Isley helped Gabriel and Wiggins win the 4×800 before heading to soccer.

“We’re fortunate to have coaches who will share players,” Kirkpatrick said.

Leading the charge for East were junior Iyahnna Neal, the Field MVP, who swept the throws, and junior Katelyn Sprinkle, who won the 100 hurdles and was the fifth-leading scorer in the meet with 20.5 points.

Neal  edged Salisbury’s Lexie May by 7 inches in the discus. She won the shot by more than 2 feet over teammate Madison Lovingood.

“I really like the discus better than the shot, but I was able to win both today,” Neal said. “I’m lucky to have a coach (Nate Santiago) who pushes me.”

Sprinkle’s victory in the 100 hurdles came by less than a second over her younger sister, Gracie, who made it a 1-2 finish for the family. East has its own sister act.

“Gracie is a freshman and I’ve been doing this since eighth grade, so I just couldn’t let her beat me,” Katelyn said with a laugh. “But I was really glad that she got second. The competition helps both of us. We can push each other in the hurdles and competing with each other makes us better than we would normally be in a big meet like this.”

“We won the 4×100 for the first time in forever,” Wyrick said. “Our freshman anchor (Azaria Jones) doesn’t even know it yet, but she can be a beast.”

Lowery carried South to third place. She blew everyone away in the 800, 1600 and 3200 and she anchored South’s second-place 4×400 team. The Distance MVP, Lowery was the leading scorer in the meet with 32 points.

“I kind of hated winning today without getting any PRs,” Lowery said. “I was just running by myself most of the day and had to push myself.”

South coach Rebekah Julian said Lowery is special and will keep getting better.

“She puts in the work,” Julian said. “She’s very tough mentally, and we always tell them that when you step to the starting line, half the race is going to be the mental part.”

North’s fourth-place effort was sparked by junior Lakayla Birst, who won the high jump and the 300 hurdles. Birst is known mostly for the jumps, but she had a strong run to beat the Sprinkles in the 300 hurdles. She ran 50.89, faster than her seed time.

May was Salisbury’s top scorer with 12 points in the throws. NiTavia Corpening contributed a second place in the long jump.

But it was Carson’s day. Another county win to build on.

“Last year, winning this meet for the first time was big for us,” said Hargrove, a sophomore. “This time everyone came to beat us, but we won again. That shows we’re still growing as a team.”